Good Friday. A whole long weekend ahead of me. The weather forecast is for sunshine and warmth. I can’t wait to begin walking again.

Birchington promenade, beneath the chalky cliffs, is wide and inviting. The tide is out, exposing rocks and muddy shore line. There is a smell of salt and seaweed, with just a whiff of decaying slime. The sky is blue and the sun is shining – just as promised. The only disappointment is the haze, obscuring the horizon and preventing some really good photography today. 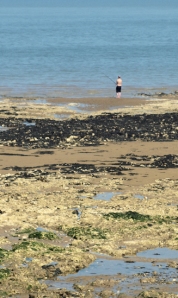 With the good weather, and the holiday, I expect to see people around today. This sea front is broad and long, and with no sand to attract the family crowds, it remains relatively empty; yes, there are walkers, some cyclists, a few fishermen, a couple of children hunting in rock pools and some brave swimmers.

As I walk along the concrete walkway, I come across lovely little sandy bays. And the promenade ends at Epple Bay – unspoilt – with blue sea and white cliffs.

At Epple Bay, I walk up the cliff and continue along the road, running into Westgate on Sea. The sun is hot. By the side of the road are signs, warning of crumbling cliffs.

The street is lined, on the landward side, with rather nice houses. They must have great views of the sea from upstairs windows. Now the road winds down and I see Westgate on Sea stretched out before me. There is a largish expanse of sand and – what a change – crowds of people on the beach.

Feeling tired and thirsty (and very hot), I make my way across the bay, following the promenade. On the other side is a cafe. It is too hot to sit outside – very few of the tables have umbrellas – so I sit inside. Although I often have fish and chips for lunch, I decide it is too warm for a cooked meal (never thought I would say that on a Good Friday in the UK!). I order a cup of tea and a scone with jam and cream.

The cafe is basic and the prices are cheap. Somewhat to my surprise, the tea is served in a china mug – a big china mug. Lovely. And the cream, although frothy, does not seem to have come out of a can. Wonderful. 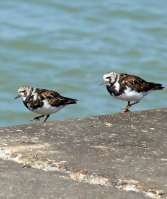 After lunch, I follow the promenade, walking past beach huts, heading for Margate.

On the way, I pass some cheeky little sea birds. They appear relatively unafraid of humans. Knowing nothing much about birds, I take photos and later (using the RSPB Bird identifier facility), I realise they are two different species, the darker ones are turnstones in their breeding plumage. The lighter ones are sanderlings, still in their muted winter colours but with their feathers just beginning to change for the summer.

I round a corner and see Margate ahead of me. It looks lovely. The artist Tracey Emin lived here as a child and talks about the wonderful light that Margate enjoys. This is because of its strange position, looking westwards, so the town catches the long western sunlight in the afternoon. Anyway, it looks lovely to me.

As I walk towards the main part of the town, I pass a fenced off area with a derelict looking building, in the process of being redeveloped. I am intrigued by the faded sign on the facade. At first I think it says the ‘Royal Sea Bath Hospital’. Then I realise, it says ‘The Royal Sea Bathing Hospital’.

Was Margate somewhere people came to ‘take the waters’, as the Victorians did in the spa towns of Bath and Cheltenham?

Later I learn this is an old tuberculosis hospital and, yes, the patients were treated by dousing them in sea water. Indoor pools were built so they could undertake this treatment throughout the year. Whether it killed more than it cured is anybody’s guess.

There are some wonderful photographs of the old hospital on this Abandoned Britain website.

At the far end of the bay, close to the harbour wall, I see a modern building. I wonder if this is the Turner Contemporary, recently opened by Tracey Emin a couple of weeks ago. As I draw nearer, I realise I am right.

It is stunningly hot. I head for the cool looking building and my heart is set on a late lunch here, but I find, to my disappointment, that the cafe is housed in a greenhouse-like extension (sun flooding through large glass windows) and all seats inside are taken. Outside there are tables and chairs, but no shade umbrellas.

I take off my rucksack and sit in the airy, cool foyer and wait until the sweat on my back has dried.

To my left is a huge window, looking out on the sea and sky. Yellow stripes fall down the glass, with a punched out circle in the centre. The walls on either side of the window have mirrors, with reflections bouncing back and forth, creating a kaleidoscope effect.

I realise this is one of the exhibits – by Daniel Buren, Borrowing and multiplying the landscape. This is fabulous.

Now, I could bore you for the next 50 minutes with my thoughts and feelings on this great exhibition, staged for the opening of the Turner Contemporary, and called Revealed, but I won’t. Instead, I’ll direct you to the Independent’s review of the exhibition, which is, in my opinion, gives a better overview of the exhibition than the Turner Contemporary’s own rather over-complicated web site does.

If you are thinking of visiting the gallery yourself, a clue to the type of art on display is in the title – Turner Contemporary.

The most disappointing part of the exhibition, for me, was Russell Crotty’s display. I love astronomy, I love walking, I love writing and I love art – and his work brings these four passions together. But I found his ‘planets’ were little too pale and insipid for my tastes. The words hidden in the art were punchy – but that punch was not reflected in the overall execution. Much of his art work was in the form of giant sketch books and, for reasons of wear-and-tear, the curators were only allowed to turn the pages every 15 minutes. This meant that most visitors would only get a glimpse of the art contained in the books. That said, I found his ideas really inspiring.

An exciting exhibition by Hamish Fulton will be opening in January 2012 – entitled, simply, Walk. I love the idea of this and may return next year to visit. He was commissioned to conduct a series of walks by the gallery, before its opening. An unusual concept and a great idea.

Hamish Fulton: ‘Walking is an art form in its own right, it does not have to be a lesser form of land art.’

Now, that is my kind of artist!

I lingered in the gallery until 4pm. Now, with the air cooling, I feel I need to get walking and pick up the pace.

Heading east, I follow the promenade. This area in less frequented, and less well-kept, than the western side of Margate. There is a disused lido, the remains of old steps and cliff lifts – all covered in chalk graffiti and reminders that this resort was once more extensive.

Interestingly, in this deserted section of Margate, I found foreign families out; an asian family having a picnic, some Russians with a barbecue, groups of eastern Europeans strolling. 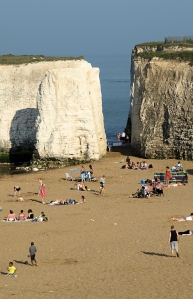 The next patch of my walk is truly beautiful. I walk through sandy bays, across an area used for jet skiing, along the bottom – and then along the top – of chalky cliffs, past a ruined fort. The sea has worn the coast and eaten chunks out of cliffs, creating interesting shapes. Families are out, sitting on the beaches and swimming in the sea.

The sun is low in the west, but still warm, although the heat of the day has gone.

One section of cliff has become detached from the main cliff face, with a broken road surface dangling into an abyss. Another reminder of the power of the sea.

Finally, I reach an amazingly beautiful outcrop of rock, called (I think) White Ness. Beyond the chalky cliff face, blue sea stretches out to a hazy horizon and, like weird ghosts, the faint outlines of large ships can be seen, floating in the Channel. 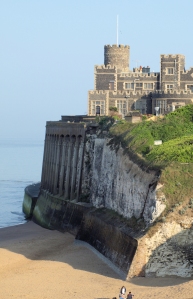 I catch glimpses of a large house – looks like a castle – towering above the cliff. As I approach, I realise my route along the sea (both above and below the cliff) is barred by the private grounds of this castle. Built in the 1760s, Kingsgate Castle has been converted into private residences.

So, I am forced to deviate inland, walking along a road and then along a cycle route. 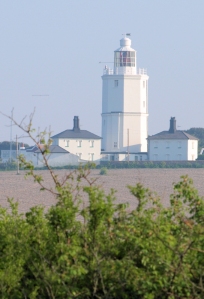 Across the fields I see the North Foreland lighthouse, lit up by the slanting sunlight.

Then I arrive at Joss Bay. At first I only see the car park, then, looking down, I realise this is a perfect bay – a beautiful punched-out curve of sandy beach, blue water and stunning white cliffs.

I sit and wait for my husband to arrive to collect me, watching families on the beach as they pack up their belongings and climb the steep access path to the car park.

I drink the rest of my water and eat melted chocolate from my snack box – not caring about the mess.

Miles walked: 8 (not including walking around the Turner Contemporary)

15 Responses to Stage 41. Birchington to Margate to North Foreland