I walk along wood planking, across the shingle and down to the beach at Lydd-on-Sea. The sky is dark and threatening. The wind is strong.

Two ladies, wrapped up against the chill of the wind, are sitting on the end of the wooden walkway. Two men (their husbands?) are out on the exposed muddy beach, digging for bait.

Nobody else is here. My footsteps are the only ones on the sand.

As I walk along the beach, the tide is down and there is a wide expanse of flat, muddy sand to walk on. I feel invigorated, full of energy, ready for the day ahead. In the distance I can see the tip of Dungeness. Behind me, hidden by haze and low cloud, is the wide sweep of the bay, back to Dymchurch and Hythe. I imagine, although I can’t see, the long promenade and Folkestone beyond.

I wonder if a fishing vessel has unloaded catch it is not allowed to keep – fish that are too small and have to be dumped overboard? But then I decide it is the power of the waves, killing the fish by pounding them in the surf against rough shingle. I don’t know for sure.

As I head south, heading towards the misty tip of Dungeness, the strip of exposed sand on which I am walking becomes narrower.

From time to time, I hear the chuffing and tooting of the little steam train. A few minutes after the toots, I get the whiff – slightly acidic in the back of my nose – of steam and coal and oil. Then the air clears again, as the wind whips around my face.

After a little while, I look back and realise the tide has come in, covering the sands up to the shingle, all along the beach I have just walked on. In less than an hour, the sea has flooded in, silently, behind me.

With no firm surface to walk on, I head inland across the shingle. As usual, walking on dry shingle is hard work. Every step I take forwards, results in a downwards slide backwards. I have to work twice as hard to make any progress. My legs ache.

Dungeness itself is a weird place. There is shingle everywhere, as though we are on one enormous, endless beach – and I suppose we are. Although this is a designated National Nature Reserve, people live and work here. The houses are, in the main, made out of wood and single story. Many of them have boats lying alongside. Some homes appear to be old railway carriages. Everything is higgledy-piggledy. Telephone cables loop between poles that criss-cross the spaces between buildings.

This is not a wealthy place. These are not luxury holiday cottages.

The road winds through the houses, heading for the power station at the tip. And along the road runs the railway track. When I walked to Lydd-on-Sea from Littlestone-on-Sea, I had heard the little steam train before and had caught a glimpse of it. So I am expecting a small engine and ‘toy’ carriages and am not taken by surprise when the tiny train passes me – with much tooting and chuffing – heading for the tip of Dungeness.

Along the shingle, close to the sea, are fishing boats, shacks, and an odd collection of rusting machinery and old railway tracks, leading out to sheds. A working place.

There are two lighthouses at the end.

The new one is enormous. I am dizzy looking up at it.

The second lighthouse is older, smaller and no longer functioning. The Old Lighthouse remains a Grade 2 listed building, open to the public and available for weddings.

I am no longer the only tourist here. Cars arriving with people coming out for this bank holiday Saturday, braving the blowy weather. People walk and take photographs – of the shingle vegetation, of the lighthouses, of the sea.

And above us all, ahead, is the power station. This is a fully functioning nuclear station. It doesn’t have the charm of Sizewell – the buildings are too flat and squat. It is missing the wonderful dome. But it does irradiate a feeling of immense power.

I stop at the only pub in Dungeness, where I plan to meet my husband for lunch. The place is quiet. Then a train arrives at the little station close by. Cold, windblown people head for the shelter of the pub and the place is soon full.

After lunch, I set off, heading around the perimeter of the power station. My plan is to walk along the coast, following the shore, from here to Camber Sands and then on to Rye.

Alas, things do not go according to my plan. 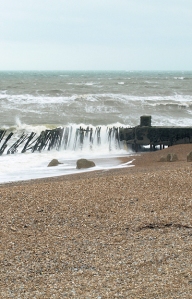 When I get past the shelter of the power station, and climb up to the top of the bank, I experience the full force of the wind. It threatens to knock me off the bank. I struggle to keep my foothold in the loose shingle. Luckily someone has driven a vehicle up here, and the stones are somewhat impacted, making the going – although difficult – not impossible.

On the beach, huge waves crash and break against more shingle. There is no sand on which to walk.

Buffeted by wind, and fighting for a foothold on the shingle, I continue onwards. Only 5 miles of this, and I will reach Jury’s Gap and – if the map is correct – I will find sand to walk on. In the meantime, the only sand around is being blown at me, horizontally, getting into my eyes, my nose, my hair, even my ears. 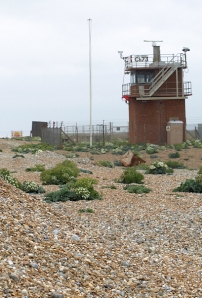 Ahead of me is a military watchtower. I have been looking for this. I am about to enter a firing range. Apparently, the range operates 300 days a year. I am hoping it will not be used today, being bank holiday weekend.

I don’t know for sure. Hythe Community Web site provided information about the opening times of the Palmarsh ranges. But a Google search did not turn up any specific information about times for the Lydd firing ranges at Dungeness. I did find an MoD link and rang their out-of-hours telephone number the previous night. But nobody answered.

So, I am on the lookout for red flags and lights.

The watchtower appears empty and I can see no lights. But there is a flag. A red flag. A definitely red flag, fluttering madly in the wind. But is it a ‘real’ red flag? Or just an old flag left carelessly on the platform? How can I tell?

I sit down on a large rock and consider my options. If there is live firing on the range, I cannot continue along the shore. The ranges are placed so that artillery fire and rifle shots are aimed over the sea. I am nearly being blown off the bank. I don’t want to be blown up too.

Looking at my map, I cannot see a clear right-of-way inland. But there are a few footpaths and ahead, only half a mile inland, is a track that I may be able to walk on and this leads me to a circuitous road. After dithering a little longer, checking and re-checking the map in the hope that a new red dotted ‘right-of-way’ line will mysteriously appear, I set off across the strange shingled surface of the Dungeness nature reserve. The shingle here is rather ‘dirty’ looking, darker grey surfaces on the brown/grey stones. There are clumps of bushes and grasses. In some places, the shingle is covered by thick plants, like matting, creating a soft carpet to walk on.

But the shingle, undulating gently and covered in low plants, is utterly featureless. Far ahead I can see a water tower and a church. But I can’t make out, on my map, what the tower is and which church I am looking at. I feel disoriented and uneasy. I have the dangerous firing range on one side. A nuclear power plant with fierce warning signs on the other. A howling gale blowing behind me. And ahead is a protected nature reserve, across which I am not supposed to wander freely (signs advise sticking to the paths).

Reluctantly, after tramping around for a while, and getting very dusty, I retrace my steps past the nuclear power station. As I return, I notice an illuminated sign board within the nuclear site. The sign proclaims in red lights, as if it is some wonderful feat, ‘26 event free days’. Hang on! What happened 27 days ago? What do they mean by an ‘event’?

Then I trudge back to the pub, back to the lighthouse. From here, definitely marked on my map, a footpath sets off across the Nature Reserve, heading for Lydd.

I am reassured. But really my troubles have only just begun. The path is marked. But only just. Intermittently. Halfheartedly. In fact, the signposts consist of short poles, sticking up above the ground by 1-2 feet. This makes them impossible to spot from a distance. And the footpath leads to a narrow strip of land, running across a large lake. If I miss the strip of land, I will have to walk round the whole lake.

To add to my worries, the shingle here is extremely deep and very, very loose. I feel I am walking in deep mud. Or walking through a trench of soft snow. My boots slip and slide. My knees ache. Dust, tossed up by my footsteps, blows around me, coating my boots and trousers in a grey film. Part of me reassures myself – I can always turn back. But after a while, I know I can’t. I have come too far. It is 4 o’clock in the afternoon. I have already spent 3 hours trudging around Dungeness. I need to press on.

The trail seems frighteningly illusive. I keep the Old Lighthouse directly to my back. I watch for the footpath markers ahead – I can only see one at a time. I keep walking.

Just as I am about to give up, and decide to strike out for the road I can see running to the north, I spot the strip of land. It crosses the lake, taking me towards Lydd. And, blessed relief, it is remarkably shingle free. 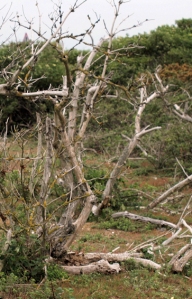 Safely across the lakes, I walk through a field full of sheep and strange dead bushes. I join the road by Boulderwall Farm. Now I have a two-mile trek into Lydd, following a road with no pavements. Luckily traffic is light and I make good progress.

I text my husband and ask him to pick me up from the roundabout in Lydd.
“Don’t you mean Rye?” he replies.
“No.” I reply, shortly.

Later, when I look at my map again, I realise I have only really travelled 3 miles today – and they were all inland, not along the coast.

But, I have spent several hours trekking through some of the weirdest scenery in England – rare plants and an exotic landscape – all in the shadow of a great nuclear reactor. What more did I want?

There is information on Wikipedia about the Dungeness Nuclear Power Station.
You can find out more about the lighthouses of Dungeness on the Trinity House website. Trinity House is the General Lighthouse Authority for England and Wales (and the Channel Islands and Gibraltar too – to be strictly accurate).

Vital stats: miles walked = 13 miles – but none in the right direction!

10 Responses to 47. Dungeness to Lydd