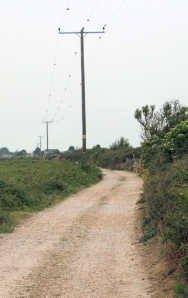 It is bank holiday Monday – the last weekend in May. I am looking forward to today’s walk. There is, apparently, no right of way along the sea wall, so I leave Rye Harbour following a track running just inland of the shoreline. I am walking through a nature reserve area, alongside lakes.

Unfortunately, this section of the walk proves to be not as scenic as I hoped. The nature reserve is in the process of being constructed. The lakes are hidden by tall bushes. Private signs force me to stick to the track. I see no birds, no water, no sea – this path is somewhat boring. 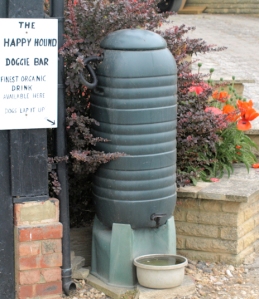 I approach Winchelsea beach and houses appear, lining the track. The track widens into a road. I meet young girls, in brightly coloured welly boots, taking dogs for walks. The girls wear shorts and thick jackets. The wind may have dropped, but the sky is overcast and it is not warm.

Somebody has created a doggies’ ‘organic’ drink bar by the side of the road. I find the sign amusing and stop to take photographs.

The track joins the sea wall.

Here there is a wide shingle beach and a narrow walk-way along the sea bank. I look back towards Rye Harbour. I guess I could have walked along the coast after all.

Looking in a south-westerly direction, the shingle beach stretches round a point and beyond, towards distant cliffs. That must be the aptly named ‘Cliff End’, shown on my map. There is a high cliff in the distance, pale in the haze, and I wonder if this is Beachy Head.

A red flag is flying. I presume this means ‘no swimming’.

I sit for a while and have a drink, eating a snack. I remember how to take a self-portrait using my camera’s timer (I am getting better at this).

In the photo I look relaxed, despite having run across the beach to get into position.

I pass a low area where there is a green field and people playing football. An information sign tells me that this green space was the site of a New Harbour, built at great expense to replace Rye Harbour further up the coast, after the old harbour became blocked with silt and shingle. The New Harbour opened in the summer of 1787 but, after only three months of use, itself became the victim of shifting shingle and was also blocked. The New Harbour was abandoned in October 1787.

I am amazed to learn that the old Rye Harbour is still kept open, as a functioning harbour, by continual dredging to remove 55,000 tons of shingle a year. 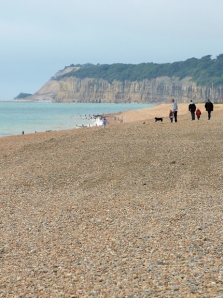 Below the sea wall is a road. A few cars pass to and fro. Sometimes a car stops, people get up and climb the bank, look at the sea for a few moments and then return to their cars.

While I walk, a truck stops in a lay by on the road below. The front passenger door opens and three men in yellow vests fall out. Literally, they fall out. The one on the bottom starts wailing in mock protest. The others hoot with laughter. Seeing me above them, he quickly gets up. One of the men takes the bag from the bin by the road, throwing it into the back of the truck. The three men pile back into the front seat and the driver, who remained in the cab, starts the truck up again.

A few minutes later, I see them repeat the exercise, in another lay by, further down the road.

Three men to empty one bin? I wonder why. Could this have anything to do with it being a bank holiday Monday? Overtime payments, perhaps?

The clouds clear and the sun comes out. To my right, I look across Pett Level, across green fields dotted with sheep and up to a windmill on a rise. Somewhere, just before the land rises into a ridge, is the Royal Military Canal and the long distance path that runs along it.

Later I learn the Canal was built as a defensive ditch – to defend Romney Marsh from an anticipated invasion by Napoleon. This incredible project (the 28 mile ditch was dug by hand – using picks and shovels) was not completed until the Napoleon threat had passed. Embarrassed by the cost – the defensive ditch was converted into a navigation canal. Now it is used by fishermen, walkers and cyclists. Some sections are still open for boats.

I expected to find the opening of the Canal, where it joins the sea. But I never did. Instead, I find myself walking along a promenade at a place called ‘Pett / Cliff End’. The promenade ends in a dead-end.

I retrace my steps and join the road. After a short while, I find a footpath off to the left. The footpath leads upwards, steeply climbing up the slope that marks the beginning of the cliffs. I walk along the back of gardens. In some places, the path is very narrow – high garden fences on one side, bushes and a steep drop on the other. 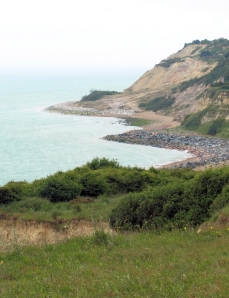 When I reach the top, I walk along the side of fields and can see the base of the cliff at an area called Fairlight Cove. It almost looks as though the cliff has been quarried here. But, in fact, the cliff has crumbled into the sea (the coast moving 100m inland in the past 100 years) and attempts have been made to pile earth and rocks at the base to protect against further erosion.

Later, I find out there is a naturist beach at Fairlight Cove – although access to the beach is deterred due to the dangers posed by erosion. There are great fossils to be found here. And dinosaurs’ footprints.

I see no fossils, no dinosaur footprints and no nudists.

But I do meet my husband in the village. He has walked along from Hastings to meet me. He has managed to find a pub for lunch and keeps me company for the rest of my walk.

The walk from Fairlight Cove to Hastings is lovely. This is a Country Park, with free right to roam. Multiple footpaths criss cross over the top of the cliffs. And the going is not easy. We go down into dips, climb up steep banks on the other side, down again, up again.

The sky has clouded over and rain threatens to come but never actually arrives. Sadly, my photography is ruined by the poor light.

Signs tell us access to the beach below is not advised, although we do see narrow tracks leading downwards. We come to one such path and meet a family climbing up. My husband asks if we can get down to the beach below and a young man in the group says we can, if we don’t mind climbing a bit.

We head downwards, following a small stream, clambering over rocks, until we emerge on a natural ledge, 10 feet or more above the beach. The sun comes out. The beach below is invitingly sandy. It would be great to walk into Hastings along the sand. But the climb down to the beach is exactly that – a climb. In walking boots! It is impossible.

My husband is reluctant to give up the notion of getting onto the beach. Eventually I persuade him it is best not to risk broken bones. We turn back and scramble back up, the way we came, to rejoin the walk along the top of the cliffs.

When we reach Hastings, there is a lovely stretch of greenery at the top, with an ice-cream van, and people walking. From here we look down on the town and its pier. It is late afternoon. The clouds have broken. The sun is in our eyes, bouncing off the water, turning the sea silver.

We follow steps that lead down from the cliff, and emerge through a narrow alleyway onto the sea front itself. The beach here is very shingly. We see a family feeding seagulls – with much flapping and noise.

Ahead, as we walk along the promenade, we see the pier. It is a blackened ruin – broken and burnt. What a sad sight!

Just beyond the pier is our car. I am very tired, having walked many miles and up and down. My husband, much to my annoyance, is still full of energy and, even more galling, is completely and utterly blister-free.

3 Responses to 49. Rye Harbour to Hastings