I start off on a dull morning, walking along the road from the industrial estate in Langstone. The road crosses over a bridge and I see the footpath below. There seems no way to get down, until I realise I need to walk down an inclined cycle path on the opposite side of the road to pass under the bridge.

The swans are still swimming in front of the Tarmac works. Yesterday there were jet skiers here, launching from a slipway. Today, on this dull Sunday morning, there is nobody around except a few dog walkers.

Just as I am thinking this looks like a good spot for informal messing about in boats, I see a sign warning that shellfish may be contaminated. I wonder if that is due to the nearby sewage works? The sewage smell is distant but still present.

The path is also a cycle way – called the Solent Way and leading towards Portsmouth. It follows the coast and is well maintained, although long, straight and somewhat boring. But not unpleasant.

I meet an old boy walking his little dog. Few other people get as far as this. I have noticed most dog walkers don’t stray more than 50 yards from their cars.

Looking back, I can see the path along which I walked yesterday and the distant outline of the bridge to Hayling Island.

I reach the A27 and, for a short while, the path runs beside it. Although I can hear the traffic roaring by, there is a wide hedge that separates walkers and cyclists from the busy road.

Close to the road, I come across two fenced off areas and warning signs for Japanese Knotweed. This is a new experience and I am surprised. I only have a vague idea about this plant but I know it is a menace – growing very rapidly and with no natural predators in the UK.

Later, I learn that Japanese Knotweed is controlled by law in the UK and it is illegal to grow it in your garden. It can grow through concrete and cause structural damage to buildings and to roads. Looking at my photographs again, I see no sign of it in the fenced off area. Hopefully it has been successfully eradicated.

Walking onwards, the path branches away from the road and runs around the edge of a triangle of boggy land, called Farlington Marshes, that sticks down into Langstone Harbour. Although I seem to have spent much of the past few walking days skirting around peninsulas of land, I am pleased to get away from the busy road.

The sky overhead is clear and the sun has started shining, so I am surprised when drops of rain begin to fall. I am on the edge of a band of rain cloud. I stow my camera and iPhone away. Luckily the rain does not come my way and I escape a drenching (my husband, cycling inland, is not so lucky).

A few minutes later I see this lovely rainbow over Havant. 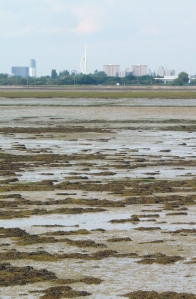 Approaching the tip of the peninsula, there are great views out across mud and water. Looking across Langstone Harbour I can see the cityscape of Portsmouth, including the unmistakable shape of the Spinnaker Tower – like a giant sewing-machine needle.

I meet some joggers, a few walkers and a number of bird watchers. Everybody is friendly and says ‘hello’ as they pass.

Coming off the marsh area, I walk across a bridge onto Portsmouth. Although the road is very busy (this is the A2030), there is a wide walking and cycle lane across the bridge. 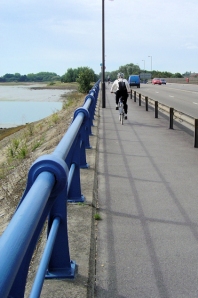 Portsmouth is built on Portsea Island and is, technically speaking, an island. Therefore, according to my ‘rules’, I don’t need to walk around it. But I do want to see the new Spinnaker Tower and there is a good footpath shown on the map (the one I am following).

I know the old area of Portsmouth, Southsea and the old town, as I spent some weeks here on an attachment at St. Mary’s hospital when I was a medical student. So I am looking forward to seeing the city again but I am not expecting much. I remember a hectic town centre with brutal architecture and a neglected sea front.

This part of the walk is surprisingly scenic with a view over the muddy harbour and sailing ships sitting in the mud. If the tide was in, the view would be even nicer. 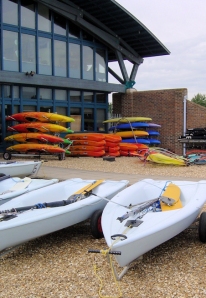 I pass an activity centre. There is nobody around, but I see a collection of small sailing ships and bright kayaks. Alongside is a climbing wall. It looks like a fun place.

The path is concrete and I make good progress, arriving early at the pub where I plan to meet my husband for lunch. It is already filling up at 11:55 am. I am not the only early bird.

Upstairs there is a wooden balcony, where my husband parks his bike. We sit outside, overlooking the mud. The tide is coming in and as we eat we see the water steadily advancing nearer to the shore.

After lunch, I set off along the coast path. There are more people around now, out for Sunday strolls.

A long time ago, while at the hospital, I walked to the shore to see the sea. I remember walking across a derelict wasteland of scrub and wind-blown rubbish to the edge of the water. I stood on a rock and gazed over brown mud and grey water and wished I was somewhere on the other side of the ocean – somewhere warm and sunny.

I try to find the spot where I stood, but the area has been rejuvenated, with grassy banks and this lovely path. It is unrecognisable. And much nicer.

Further on, I come across this memorial, paying tribute to the service men and women who have lost their lives in recent conflicts. The memorial is not an official one. A couple of men sit nearby in folding chairs and I gather, from their proprietary air, they must have erected this.

Portsmouth is a naval city and many service people are based here. I wonder if there is an official memorial and, if not, why not. 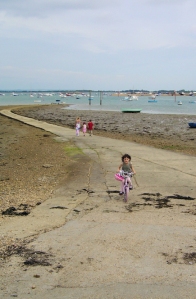 The path winds around the coast line, in and out. I pass pubs and cafes. I reach a spot where Hayling Island seems very close indeed and a hard path stretches out across the mud towards it.

I know there is a passenger ferry (a Ferry P on the OS map) across this narrow strait of water. I look to see if I can spot it. There are a great many ships out there, but I can’t see an obvious ferry. 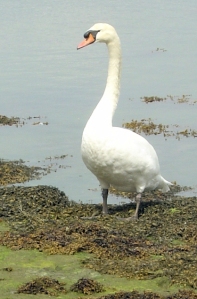 I walk around a bay where there are some new houses. The path is no longer clear. I am walking across shingle, sand and mud. I realise I am not on the official footpath, that passes inland of here, but I hope to find a way through around the shore line. I keep going.

I see a young woman ahead of me. She is hesitant to walk beside the water because of a group of swans. I pass close to them and take some photos. They watch me but they don’t move.

Frustratingly, I find myself in a newly built up area. The houses are very nice but block the way around the coastline. Beyond the houses is a marina – another block. I find myself walking down a road that leads to the Ferry P – but this is a dead-end. So I turn round and make my way past some old military structures before I can get access to the beach.

Now I walk along the south shore of Portsmouth. The beach is shingle and the going is not easy. I have a blister on the sole of my left foot, just below the base of my 2nd and 3rd toes; an odd place for a blister. I popped this yesterday, but it is starting to hurt again today and the shingle is making it worse.

I see a group of people on the beach. They seem to be queuing up for turns on an inflatable ring, being pulled by a small motor boat. It looks like fun.

There are a few people swimming and some families on the edge of the sea – where there is a small strip of sand below the shingle and where children can dig with buckets and spades.

Further on, I hear the sound of music. There is a large group of afro-carribean families. They are setting up a barbecue and have various tables laid with food and drink.

My foot is hurting and I decide to sit down and readjust my socks and blister plasters. I am surprised to find a memorial bench with knitted accessories.

At first, I think this must be a tribute to an elderly lady who liked knitting. Then I realise the person to whom the seat is dedicated (Isobel Hunter Russel) only lived 6 months. Was it a child? Or a dog?

A nearby lamppost has a knitted cover too.

I approach the pier, where I am going to meet my husband and, realising I am early, I buy an ice-cream from a van – 99 flake, yummy. Sadly, before I start eating it, I drop the cone while putting my money away. A nearby white terrier looks very pleased. I am very disappointed.

Highlights: Farlington Marshes and the surprisingly nicely renovated seashore on the east side of Portsmouth.

10 Responses to 62. Langstone to Portsmouth