We have trouble driving here this morning. There are ‘Road Closed’ signs in place due to terrible landslips caused by weeks of torrential rain. Despite the fact the main road is now open, we inadvertently follow the diverted route and drive into East Looe along a frighteningly narrow street – barely wide enough to take a car.

It is high tide. Looe harbour is full of water but is strangely quiet, with few people around and little shipping activity. It may be bank holiday Easter Monday, and the sun may be shining, but there is a piercing east wind and it is very cold.

I linger in Looe taking photographs and putting off the moment when I have to face the wind on the exposed cliffs of the coastline.

On Friday, my phone stopped working. The same thing happened yesterday, on Easter Sunday. The two days were bitterly cold and my phone started working again as soon as I had warmed up. My assumption is that my iPhone doesn’t work properly when it’s very cold. So today I have a plan. I’m going to keep my phone in my bra. It may be uncomfortable, but I hope it will keep working. 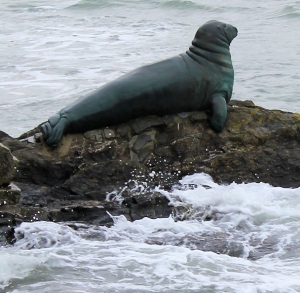 On the way out of West Looe and back to the mouth of the estuary, I pass this amazing piece of sculpture.

Later I learn this is Nelson, a one-eyed grey seal who used to hang around in Looe and was a popular sight, until his death in 2003. His statue was cast in bronze and made by local sculptor Suzie Marsh with money raised mainly through public donation. He certainly looks magnificent, guarding the harbour with waves crashing around his base.

The path follows the road, climbing up above Looe, giving great views back down on the town, with its pretty, painted houses and its harbour.

The road leads around Hannafore Point, where there is a rocky beach and a narrow promenade. The low cliffs in this area have been affected by land slips too, and the promenade ends in a mass of fallen vegetation and warning signs. 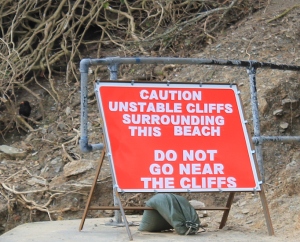 Cornwall has certainly had more than its fair share of erosion and rock falls, following the relentless wet weather of last summer and this winter.

Unable to walk further along the shore, I retrace my steps and climb up off the promenade, rejoining the road.

The coast road comes to an abrupt end, but the official South West Coast Path carries on, and runs along the sloping hills above the sea.

Conditions aren’t good. The wind is fierce and both the sea and landscape are cloaked in grey. The light is too poor for decent photography. But the walk itself is reasonably easy and, without distractions, I make rapid progress.

Looking back, I see the finger of Hannafore Point bravely pointing into the wild waves, marking the western end of Looe Bay. On the shore beyond, I can just make out the houses of Seaton and Downderry – reminders of yesterday’s walk.

I meet a few other walkers, but not as many as you would expect to find on the popular South West Coast path on a bank holiday Monday. The path winds through gorse and scrubby bushes as I round a headland and continue walking towards Talland Bay.

Talland Bay would look lovely in sunshine. Today it looks wild and stormy.

There is a cafe here, a small car park, and a rough, grey beach, covered in seaweed. There are a few families milling about. I am tempted by the cafe and the thought of a cup of tea, but decide to continue onwards instead.

The sea breaks over rocks. If you were sailing in this area, you would need to keep far off shore – or know the dangers well. I wonder how many ships have been wrecked here?

From Talland, the path climbs up some unexpectedly steep slopes and is surprisingly crowded with strolling walkers. I find myself resenting the company.  I am frustrated by how tiring I find this section.

I stop to look back at Talland Bay and realise it consists of two beaches – two little coves. I am sure it would be very picturesque in the summer.

Half way up the slope, I come across a World War 2 monument. There are only a handful of names on the memorial but, for a small community, it must have represented a significant loss of young men. Two share the same surname. I wonder if they are brothers.

The sun comes out, lighting up the stone. I take a few photographs and have a brief rest.

Many of the walkers from Talland Bay turn round at this place – Downend Point. But I carry on. Polperro is less than a mile away and there I am meeting my husband and his mother for lunch.

The path rises higher. This part of the coast is owned by the National Trust and is very scenic and unspoiled. Walking through high vegetation, I come round a corner and catch a glimpse of the harbour entrance through the bushes. This is my first view of Polperro.

Waves roll in fiercely, crashing past grey rocks and lashing at the harbour wall. There are no ships out, but I try to imagine small fishing boats setting off  from Polperro and passing through this wild water.  It seems a dangerously narrow passage, with unforgiving rocks on either side.

The path winds around the cliff, taking me down into Polperro. Behind the shelter of the harbour wall, the sea is calmer – a dull blue-green-grey colour. The houses hug the sides of the valley on either side.

I am startled by a strange vibration coming from my chest, close to my heart. Am I having palpitations? Or going into fibrillation? No. It is just my phone telling me I have received a text. I had forgotten I’d tucked it into my bra to keep it warm. Well, the technique was successful. It’s still working.

My husband has arrived at Polperro and he, with his mother, are walking along the narrow streets towards where they think the coastal path will emerge. Ah yes, I see them.

7 Responses to 103 Looe to Polperro