We stand on the quay and look over from Polruan to Fowey. The ferry is here. A crowd of passengers has gathered. But there appears to be a technical hitch.

Seeing a mechanic peering into the bowels of the boat doesn’t fill one with confidence.

My husband waits with his bike. I wait with my poles. We take photos of each other.

Then – relief – the engine chugs into life.

When we arrive at the other side, we realise that Fowey is much livelier than Polruan and we wish we had chosen to have our lunch over here. There are pubs still serving food and people eating outside in the sunshine. We look back over the water at quiet Polruan. So near to Fowey and yet it seems so different, like a sedate maiden aunt.

My husband cycles off, and I head up along the South West Coast Path  – which runs along the road to Readymoney Cove. This strangely named area is where Daphne du Maurier had a house. You can read an article about the house and its recent sale on the Guardian’s web site.

Beyond Readymoney Cove the path converges with another long distance foot path, The Saint’s Way, which leads from Padstow on the north Cornish coast to Fowey. I am reminded of all the inland routes I have yet to explore. But for now I am sticking to the South West Coast Path. It winds up through trees to an area above the entrance of the Fowey estuary.

Here is St Catherine’s Point and St Catherine’s Castle, built by Henry VIII to guard the narrow straits from French invasion. I don’t stop to look round the castle.

Across from the castle is Polruan and the lookout station I passed before lunch.

At the entrance to the estuary are sharp rocks that lurk in lines just above waves – these are the Washing Rocks, according to my OS map and are marked with a white cross. (They aren’t shown in this photo.)

Undeterred, sailing ships pass to and fro. At times these waters are crowded and in two weeks time there will be a host of cruiser yachts arriving here, having raced from South Brittany. 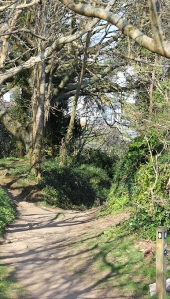 This section of the walk is lovely. I walk through the trees of Covington Wood. And later through gorse bushes with that familiar coconut/suntan oil smell.

Despite the lovely weather, I only meet a few other people on the path.

I am growing very tired. In retrospect, I should have ended my walk at either Polruan or Fowey. The first 8 miles I walked this morning (from Polperro to Polruan) were strenuous enough. But this is a rare, sunny day and I was keen not to waste a precious moment of it. After a good lunch, and a large glass of Cornish cyder, you feel you can do anything!

By the time I get to Polridmouth Cove, I have developed a painful right hip. This spoils what should have been a very enjoyable walk.

This little cove is divided into two at high tide. There is no road access, although there seems to be a private house with people enjoying a meal on a patio in the sun. I try not to stare too longingly – not at the food, but at the seats they are sitting on!

From here, the path winds around the coast, over the top of a low cliff that has suffered some landslips. Then I encounter a horribly steep, grassy slope, where I meet a couple of walkers coming down. I stop for a rest and take photographs of them walking down to Polridmouth.

I realise, with relief, that I am on Gribben Head. The steep slope leads up to the highest point on which is perched a tower.

The tower is painted with broad red and white stripes and had been my way-mark for many miles. In fact, I had first seen it in the distance shortly after leaving Polperro. I had assumed it was a light house but, as I get near, I can’t see any sign of a light at the top.

It is nearly six pm. The view ahead is obscured by the light of the sinking sun. Behind me, from this high vantage point, I can see right down into Fowey harbour. The late afternoon haze prevents some really great photographs.

I reach Gribbin Tower (sometimes spelt Gribben). I had imagined there would be car park here, but there isn’t. The nearest is a mile or so away. As a consequence, the place is eerily quiet. There is nobody else about. 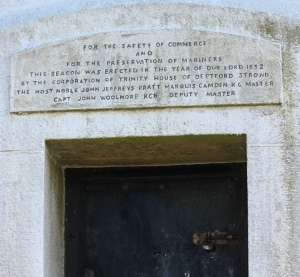 Over the door  is a carved plaque, explaining that the tower was erected by Trinity House in 1832 to protect mariners. The inscription calles it “this beacon”. Maybe there was a light on top once upon a time. Or a flame of some sort. But later, Wikipedia confirms there was never a light. The tower is a “daymark” navigation aid, marking the way into the estuary and Fowey.

The climb up the slope has really challenged my hip. It is aching on the outside, not in my groin. I take this to be a good sign as joint pain is usually felt in the groin and I dread developing arthritis. The pain must be a protesting tendon. I tell myself it is nothing serious.

I sit on a stone and have a long rest. I take a paracetamol, eat my emergency chocolate bar and drink the rest of my water – although I am not hungry, nor very thirsty. Really, I am putting off having to start walking again. I know I have a couple of miles, maybe longer, before I get to Polkerris. I can’t make out from the OS map whether I will have many more steep slopes to navigate. I hope not.

I must carry on.

Just a few minutes after leaving the tower, I see my husband coming towards me along the path. He has walked from Polkerris to meet me. How lovely to see him. I feel instantly better.

He carries my rucksack, relieving the load on my hip. Trying to cheer me up, he tells me the rest of the walk is along the flat. It isn’t. But the ups and downs are not as steep as they were earlier. My hip still hurts.

We walk along the top of cliffs, the path runs alongside farm land. There are views across St Austell Bay and I can see the golden beach of Par Sands ahead and the promontory of Black Head on the far side of the bay. The sun is coming straight into our eyes and the light is too tricky for photography.

Coming down into Polkerris, the path zigzags down a wooded slope. The evening sun is very low and sends slanting rays to sneak between the trees, lighting up the foliage of the undergrowth. I love the way the vertical tree trunks are highlighted by the light and cast shadows in horizontal stripes across the bright carpet of leaves below.

Polkerris is set in a small, sandy bay where people have been enjoying a day on the beach. But the peaceful scene belies a dramatic event. Across the cove we can see a recent rock fall. Large boulders have tumbled across the sand.

Tomorrow, when I will start my walk from here, I will need to detour inland, following roads. The coastal path on the other side has fallen away with the landslip. The path no longer exists.