Today the forecast is good – intermittent sunshine and no rain. Yippee! Below is the view from my bedroom window in the B&B at Porthallow.

Last night I slept with the window open to hear the sound of the sea.

It has been such cold weather recently, the landlord has left a radiator in my room. This turns out very handy as a boots dryer – and as a ruck-sack dryer, jacket dryer, socks dryer, etc.

The worse casualty of yesterday’s wet weather was my train ticket. I made the mistake of leaving it in an outside pocket of my so-called waterproof jacket. I hope it is still valid.

The beach at Porthallow is made of rough shingle. There are various boats drawn up on the shore. I linger and take photographs but, sadly, I don’t take a photo of the midpoint marker for the South West Coast Path – not realising the significance of the large slab that sits at the entrance to the beach.

For some reason the South West Coast Path leaves the coast at this point and meanders for a couple of miles, following inland roads.

Before I leave the beach I stop to look at this sign. Here hangs a unique weather forecasting instrument and it brought a smile to my face. Today, thank goodness, the stone is dry.

At the B&B, I learnt there is a footpath I can take from the beach and it goes straight up the cliff. This is not obvious on my OS map. From the top you can walk along the top of the cliffs, by the coast. This route involves tracks across private land but, apparently, locals often walk this way. Although I am slightly confused by the information given, I am going to try to follow this route.

I scramble up the cliff via a narrow footpath that runs through bushes. I enjoy the climb and the wonderful view from the top. I look down on Porthallow and down on the cliffs I walked along yesterday, in the grey and gloomy rain. They look so different today.

At the top of the cliff is a field and no obvious footpath. I follow a vague path – it may be a sheep track – and eventually end up on a narrow road. I head towards the sea and find my self at Porthkerris. There is a water sports centre here, but the place seems deserted this morning.

Looking ahead, I see a path leading up out of the beach, following the edge of the cliff. I am not sure if this is a public footpath (it’s not marked on my map) and I have no idea where it ends up. Instead of following the path, I follow the road up the hill.

The road leads past a few rather grotty-looking caravans. I’m not sure if they are lived in or not, but they certainly aren’t holiday caravans. I feel rather insecure, not knowing who  might be watching me from behind their tatty curtains.

On the way up, I stop and take a photograph of a building below. It sits on the end of Porthkerris Point and commands a fine view across Falmouth Bay. Is it a lookout point? It seems rather too grand. I’m not sure what it is.

Sadly my promising road comes to a dead-end in a field. The entrance to the field is blocked by a closed gate with barbed wire entwined around its handle, to deter walkers. Several little caravans, with drawn curtains, sit at the side of the field. Worse still, the field is full of cattle – cows, not bulls, but each with the most enormous sets of horns.

According to my map, there might be a road on the other side of the field. But, even if I managed to climb over the gate and safely negotiate the cows, I don’t know if I can get out at other side and find the road.

Reluctantly I turn back to Porthkerris Point, and backtrack on my route – plodding down the steep hill and up the other side. On the way down I see a boat pull into the shore and men jump over the side and wade up onto the beach. They are wearing diving kit and must have been out for an early morning trip. At the same time, cars begin driving down the road to the beach. Wives, coming to collect their husbands after their dive.

I walk away from the coast along narrow lanes which seem to be nothing more than tarmac tracks.  I can’t correlate the tracks with any of the roads marked on my map. The hedges are high and it is hard to get my bearings. I get thoroughly confused and am relieved when I find a familiar yellow acorn on a pole – a footpath sign. Hooray! I am back on the official South West Coast Path.

I follow roads through the tiny village of Trenance. Then a footpath takes me over a field. The path is visible – just – as a line of slightly shorter grasses among the taller plants.

By the time I get to the end of the field, I am sneezing and my eyes are itching with hay fever. I wish I’d remembered to bring my drops in my backpack.

I emerge from the grassy field and see Porthoustock below me.

The headland looks strangely moth-eaten and – when I get nearer – I realise it has been quarried.

The footpath leads down to a track and I walk along past a lovely row of thatched houses. They have climbing roses, potted plants and tiny well-tended front gardens.

Thus I get a very favourable first impression of Porthoustock. Unfortunately, the rest of the place is not quite as beautiful as this lovely lane.

The beach is made of a rough shingle and  a number of small boats are drawn up at the top of the beach, but look very unused and are surrounded by weeds.

A tall concrete block – some sort of  industrial building, dominates one end of the beach. [Later, on Wikipedia, I learn this is a stone mill.]

At the other end of the beach is the quarried headland.

I was hoping to have an early lunch here, but I can’t see a pub or a cafe – this is a working beach not a holiday place. So I sit on a bench and eat my emergency rations. The only other people I can see is a workman sitting in his parked van and having a snack break, and a man in a wetsuit with a woman. The man is carrying a canoe and walks down to the sea. He paddles off around the concrete building while the woman stands on the shore and watches him.

I walk up the road out of Porthoustock, past the quarry entrance  – Dodman Quarry, I think it’s called – but later I realise I have misread the sign – it’s Dudman not Dodman.

After a few more minutes of road walking, a footpath leads down towards the sea and I find myself walking through an area of tall grasses and reeds and then onto the shingle of a beautiful wide bay. Again I misread my map and believe I am in Godfrey Cove. Only later do I realise it’s proper name is Godrevy Cove. [But not to be confused with Fishing Cove, Godrevy, on the north coast of Cornwall – which is a nudist beach!]

Godrevy beach is bounded by Manacle Point at the north end with a rock that has an apt name, ‘Shark’s Fin’. Out to sea are a further series of fierce-looking rocks – the Manacles – responsible for many shipwrecks. This makes the area a great site for divers.

The rocks might be hostile, but the shore is lovely – with pretty wild flowers and insects buzzing. 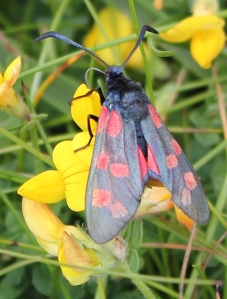 One of the colourful insects I meet is this fine-looking chap – showing off his red spots against the yellow petals.

I spend a long time in Godrevy Cove, reluctant to leave this lovely area.  There are a few other walkers on the beach and a couple of fishermen with long lines leading out into the water.

At the end of the beach, the path heads up a low cliff and becomes a track along the edge of another quarry. Warning signs ask walkers to stay on the path. I’m not sure if these are working quarries or not, but I can see no sign of activity on this Thursday afternoon.

In one area, concrete panels protrude from the quarry wall, creating the impression of a series of rooms in a partly demolished row of terraced houses. Numbers are scrawled on the concrete and denote the size of stone stored in each section.

Later I come across an information board that tells me that gabbro rock was quarried here –  hard rock used mainly for roads and sea defences. The crushed stones were carried by conveyor belt to a jetty and loaded into ships at high tide. This continued to operate until 2005.

The jetty remains as a rusty finger, sticking out into the blue sea.

Beyond the jetty a small bay curves around to a low-lying headland – aptly called Lowland Point. Apparently, this area was once a rocky island until the intervening sea became filled in as the result of land slips. Strange to think that while many sections of coast have disappeared as a result of the falling cliffs, this section has actually been formed as a consequence of the same process.

From Lowland Point, looking northwards, I can see Shark’s Fin rock off Manacle Point, then St Anthony Head and Nare Head of the Roseland Peninsula beyond. Will this be the last time I see those headlands?

Rounding Lowland Point, and looking southwest, I see Coverack ahead. I have been walking for over three hours – what should have been a short walk has turned out longer than anticipated because of my detour around Porthkerris – so I am looking forward to reaching Coverack and having something to eat.

Before I leave Lowland Point, I meet a few familiar friends. I have no idea why I seem to attract so much attention from cattle.

Normally I am frightened of cows – but these are young, small, definitely female and look friendly. They follow me for quite a distance.

The rest of the walk is fairly easy, mainly across flat land. This is National Trust property and crisscrossed with paths. I see a fair number of other walkers.

It must get muddy here at times because the National Trust seems to have provided plenty of handy stepping-stones. Despite the rain yesterday, it is dry walking today.

The final stages of the walk, just before I reach Coverack, become a little steeper. Then I find myself at the end of a track. Private houses block the sea view (shame) and I head down into the pretty village.

The beach is lovely – proper sand. I walk along beside the gentle waves and then head for a cafe on the beach road, where I have a yummy Cornish cream tea in the sunshine.

After tea, I head for the B&B where I am staying tonight. It is a pub called, rather grandly, The Paris Hotel and sits at the far end of the little bay, just behind a small harbour and next to the Lifeboat House. [Later I learn The Paris Hotel is named after the shipwrecked SS Paris, and not after the French city.]

My room is small but freshly decorated. The window opens directly above the South West Path and that is the only thing between my room and the sea. Wonderful.

14 Responses to 112 Porthallow to Coverack