I am staying in Portreath and catch the Greyhound Express to St Ives. The ride is wonderful with extensive sea views most of the way. There are only three of us on the bus until we hit the holiday camp at Hayle Towans. After that, it is standing room only.

The tiny bus station at St Ives is perched on a hill and the bus requires careful manoeuvring to get in and out. There is a grand view of St Ives harbour.

I head down and eastwards, away from the harbour and towards the railway station. From here there is a lovely path which takes me past the station and above Porthminster Beach. The weather is overcast but the clouds are high, the sky is bright and the walkway is crowded with holiday makers. It is 11:00 am and the beach is beginning to fill up.

Unfortunately, at the end of Porthminster Beach, the path crosses over the railway line and loses the sea view. I am walking in a green tunnel until a bridge takes the path back over the line, and into Carbis Bay

At very low tide it may be possible to walk on the sand all the way from Carbis Bay to the neighbouring beach of Porth Kidney Sands. I’m not sure if it is or not but, anyway, today the tide is too high. So, on the other side of the bay, I begin to climb the rising path that takes me up and over the headland of Carrack Gladden.

Carbis Bay is lovely, the view of the beach is best seen from up on Carrack Gladden when I look back.

Following the official South West Coast Path, I come around the headland. Ahead, high up on the steep slope above the beach, I can see a jagged line slicing through the greenery.
Is that really the path?
It must be.
A deeper ledge, just above, indicates where the railway tracks run.

I want to walk on the beach, not high above it, and I’m pleased when I find a path branching off to the left and leading downwards. But this path comes to a dead-end on some rocks above deep waters, where a man and a boy are paddling in a canoe. I am tempted to ask them for a lift across the stretch of water that still separates me from the beach – but that would be cheating. Reluctantly, I turn back.

Following the official path, I reach the section that heads across the slope. It is very narrow and the drop below is precipitous. This walk would be daunting for both the very young or the very old.  Passing someone coming the other way is difficult but, luckily, I meet few people.

The view across Porth Kidney Sands is wonderful from this high point. The beach is vast and it rapidly widens in front of my eyes, as the tide goes out.

As soon as I can, I come down off the slope and walk across the beach. 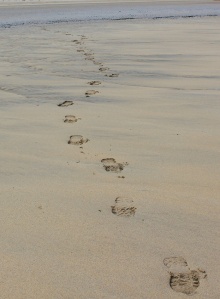 The sand is very soft underfoot and makes heavy going. I walk closer towards the sea, looking for a firmer surface.  Between the low and high tide marks, the sand is rippled, forming a series of geometric furrows.

The sand is firmer nearer to the sea. There are a few people on the beach but the space is so vast and wide that it feels deserted.

I look back and see my footprints. It’s always a great feeling to make the first marks on a freshly washed patch of sand.

I head towards the far end, where I can see swimmers and surfers are congregating at the water’s edge, and I come across an area marked off for swimming. The flags that denote the edge of the swimming arena seem very close together. Rather mean, I think, considering the vast expanse of sand around.

Just beyond the swimming area, the wide stretch of sand slowly curves around to the right, until it forms the west bank of the River Hayle. The junction between beach and river bank is subtle and barely noticeable until you suddenly realise you are no longer walking close to sea waves, but close to the fast-flowing waters of the river.

I look across. On the far bank is Hayle Towans with its holiday camp. This is where I plan to catch my return bus to Portreath. It looks very near, but impossible to get to across the deep river mouth. I have a three mile detour to make, away from the coast, around the estuary and through the town of Hayle itself.

Despite warning signs advising people not to swim or paddle in the river, there are families with young children and dogs splashing around on the sandy bank, where the waters lap with deceptive gentleness. As if to illustrate the danger, as small tug boat chugs past, battling noisily against the fierce current in the main stream.

I leave the sand, reluctantly, and turn inland to follow the footpath around the estuary. This section of the South West Coast Path is called St Michael’s way.

The path ducks under a low bridge, where I hear the noise of a train approaching. But, by the time I swing my camera up, I’m too late, the carriages have whizzed by. 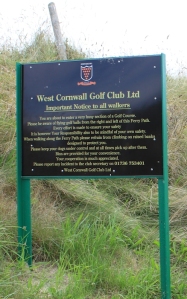 Just beyond the bridge is a golf course and the usual warning notices are displayed. At least this sign contains some helpful and  practical advice – and not just the usual ‘beware of flying balls’ nonsense.

Don’t climb up the banks.
Stick to the path.  OK.

The path joins a road and I walk along the tarmac of the narrow lanes, feeling frustrated because I know the bank of the estuary is hidden behind bushes and just to my left. At one point I pass the entrance to Lelant railway station and can’t resist popping onto the platform.

Lelant station is lovely. Tubs of flowers, a nice wooden seat, and the place is kept spick and span. Best of all, there is an amazingly beautiful view across the estuary. Sitting here, you wouldn’t care if your train was late, would you?

Beyond the station I have to walk along a short stretch of busy road with no footpath, rather unpleasant but still officially the South West Coast Path. I meet a family coming towards me. They have young children and are nervous of having to share the road with thundering trucks and buses.

So I’m relieved when I get to Griggs Quay and the apex of the estuary. There is a pub here – the Old Quay House – and I have lunch in the garden. The fish cakes are ‘off’. I have fish and chips instead.

After sitting down it is hard to get going again. The road widens into a dual carriageway as it crosses ‘The Causeway’ and heads towards Hayle. At least here the carriageway is wide and there is a proper pavement.

To my left are wonderful views across the estuary. The tide is very low and so there is plenty of mud – and lots of seagulls.

At the end of The Causeway I take another detour. A footpath runs away from the road, following a narrow D-shaped ridge as it edges around a pool of water. An information sign promises the area is home to many exciting species of birds. But, disappointingly, I see nothing apart from sea gulls.

But the detour is worth it after all. The ridge leads me close to the other side of the river and I get a great view of pretty Lelant Station and even manage to catch a photograph of a train as it hurtles by.

At the end of my non-bird-watching detour, I am about to enter a strange area of semi-derelict land, marked on my map as ‘Works’. People walk here with dogs but, unlike the beach, they seem to be locals rather than holiday makers. I guess this place was once an important port for the mining industry. It is pleasant enough – wild flowers split colourful cracks in the concrete – but I always get an uneasy feeling walking through these abandoned industrial places.

East Quay. Strange rafts float on the water. The other side looks like it should be a bustling dockside, but is weirdly empty of boats.

I cross a bridge that connects the far end of the bird-watching ridge to the ‘Works’. On this bridge, beneath which water flows swiftly, are a number of warning signs. 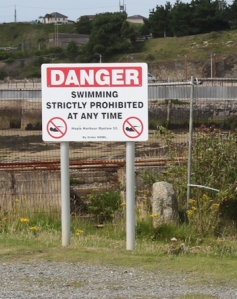 No fishing above the tunnels.

To one pole are attached bunches of withered flowers, still in their cellophane wrapping.

These are classic memorial tributes. Someone died here. A young lad? Was he swimming? Or fishing and got dragged into the river?

[Later, I discover that 28-year-old Jacob Cockle died here a few months ago. He was filming a whirlpool, formed by currents from the rapidly emptying pond I have just walked around, and was dragged under and down. Details are given in The Cornishman.]

I leave the ‘Works’ and walk along a short section of riverside in the old part of Hayle. This is not a wealthy tourist town, like St Ives, but I find it very attractive. Small boats are moored in the mud and there is a pretty waterside walkway with gardens and flowers.

I like this area. It feels a genuine place, not a holiday village but a real place where people live and work. It has a somewhat run-down appearance at the moment, but I suspect that is about to change.

A new bridge leads over another river and towards The Towans.

I find myself walking along a spanking new esplanade, kitted out with street lights and newly painted railings. Most odd. Because there is nothing else here. No shops, cafes or houses. And on the other side of the water is the derelict area of ‘The Works’, while at the far end of the walkway is an empty car park.

It is weirdly surreal. And reminds me of some of the building projects I’ve seen in Spain, where brand new stretches of tarmac road are laid out but are empty of anything – no cars and no buildings – as the developer’s dreams are postponed or abandoned.

But this purposeless esplanade has provided me with an easy walk to the sand dunes. I take one last look back at Hayle and its harbour.

[Later I discover there are redevelopment plans for this area and my suspicions about change were correct. The new walkway is part of this overall plan. I’m pleased to note, the old Quay is designated a listed structure and must be preserved. You can read more about the new development  on the Ing site.]

I come off the end of the walkway and head down the sand towards the sea, surrounded  by huge dunes that lie heaped up along the shore. According to Wikipedia, the Cornish word for sand dune is tewyn. Not surprising, therefore, that this whole area is known as The Towans.

I walk through the dunes and then along the edge of the River Hayle, looking across at the opposite bank and seeing where I stood taking photographs a few hours before. In the distance is St Ives.

I turn north-east and walk along the beach for a short way. At low tide there is a huge expanse of exposed sand and plenty of space for holiday-makers to spread out with their windbreaks and sandcastles. But at high tide the water comes up close to the foot of the dunes.

Between here and Godrevy Point is a three-mile stretch of beach and dunes. I am looking forward to this section. But it will have to wait until tomorrow, because now I have to head inland to catch the bus back to my B&B at Portreath.