135a Bude to Northcott Mouth

Posted on November 22, 2013 by Ruth Livingstone

Standing on the cliff at Upton, I look back along yesterday’s walk. I thought I had left good old Cambeak behind, but there he is, pointing his gnarly finger out into the sea. And the farthest promontory must be Tintagel. I believe I can even see the Camelot Castle Hotel.

But I am heading northwards, past Bude and onwards. The logical place to aim for is Hartland Quay. But that is 15 miles from Bude and 17 miles from my starting point at Upton. Too far.

The South West Coast Path Association have an excellent website (better than the official one). According to Andrew Lack’s distance calculator, the 15 mile walk from Bude to Hartland Quay is graded “severe” and would take me well over 10 hours at my usual walking speed. I only have 6 good hours of daylight.

The official South West Coast Path site advises that this is probably the hardest stretch of the SW Coast Path and rates the walk as “challenging”. They usually suggest a longer option, but here they say, “This walk should be enough for anyone!”

I am aiming to get to the village of Morwenstow, which is 7.5 miles from Bude and 9 miles from here. If I can manage a steady pace of 1.5 miles an hour, I should make it before nightfall.

Ahead I can see the antennae and discs of a radio or radar station. Morwenstow is only a couple of miles beyond. I cheer up. It looks very close!  But first, Bude.

I follow wide paths across the cliff tops of Efford Down. This appears to be common land and popular with dog walkers. I walk parallel to a young woman for half an hour. She spends the whole time on her mobile phone while her dog runs wildly about.

The sun is burning the morning haze away and the November day is turning clear and bright. Out in the sea are lines of jagged rocks. One looks like a rusting submarine.

Over the next rise and I get my first sight of Bude. I couldn’t see it yesterday as I walked the coast from Crackington Haven because it is hidden away, as I suspected, in its own little bay.

Before I get to Bude’s bay, I come across this strange little tower.

It is hexagonal in shape and appears to be either a lookout station or a shrine. The points of the compass are carved at the top of each wall.

Later I discover this is known as Compass Point or the Pepper Pot tower. It was built, privately, as a lookout point.

Given the treacherous rocks in the sea, it seems appropriate to have a lookout station here. But, from looking at Bude’s official tourist site, the tower was moved here from somewhere else. Where from? They don’t say.

Just below is the harbour wall, which keeps the Atlantic swell from invading Bude’s peaceful bay.

Here is Summerleaze Beach. What a wonderful name! And it’s a very pretty place. Across the water, the low rocky cliffs glow a warm russet colour in the slanting sunlight.

Coming down from the harbour wall, the first thing I have to do is cross over Bude Canal, which passes through a lock gate and then runs along the side of the beach and empties into the bay.

I later learn that the Bude Canal is very unusual in its construction, as it drops over 400 feet but only has only two conventional locks. Inclined planes were used to haul boats up the gradients.

I walk across the sands to the opposite side of Summerleaze beach and up some steps. Here I find an amazing thing. A wonderful open-air swimming pool!

There is something surreal about seeing the calm surface of the water with the sea breaking just beyond the concrete walls.

This is Bude’s Summerleaze Sea Pool, part natural and part man-made. It is large and has diving platforms and pool ladders, all set against the striated rocks of the cliff behind.

I would imagine it becomes crowded on a warm summer’s day. But this morning the water is like a mirror, only gently ruffled in places by the breeze.

Walking along the top of the cliffs, I come across a memorial bench with a difference. This one is in memory of a guide dog for the blind, Abba. There is an inscription in braille too.

I walk along an easy path to Crooklets Beach, a little cove just along from Bude, where I find a few dilapidated-looking beach huts and Bude Surf Lifesaving Club, which is shut today.

On Crooklets beach I see dog walkers and a few young men with surf boards. I can’t resist stopping to take photographs. I like the juxtaposition of old codgers and young dudes.

But I have been walking for an hour and need to get a move on. The difficult part of the walk is yet to come. Up and on. Soon I am walking over open land on the top of cliffs.

The next beach is a mile or so further on from Crooklets and is called Northcott Mouth. It is National Trust land and marked on my map as a surfing beach, although the rocks look vicious to me.

A public notice warns of pollution on the beach.

“A non-toxic fatty substance has been
washed up on this beach.

This could be dangerous to dogs
if eaten.”

I wonder what it is, but resist the urge to go and look for fatty stuff floating about in the surf. 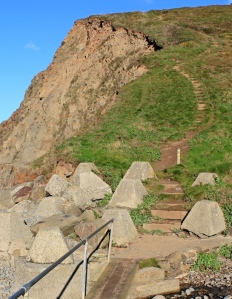 Ahead I can see the path rises up steeply from the beach, passing close to the edge of a crumbly cliff.

I check my map. This is Bucket Hill and the beginning of a stretch of coast designated an Area of Outstanding Natural Beauty. I have a feeling the route is going to get serious from this point onwards.

Up until now there have been strollers and dog walkers on the path. (But, after heading up Bucket Hill, I only meet one other person all the way from here until I reach the outskirts of Morwenstow village.)

From the top of the cliff, I take a photo showing the corrugated rocks running across the beach below. The next patch of sand must be Sandy Mouth.
Onwards.

10 Responses to 135a Bude to Northcott Mouth