146b Ifracombe to Combe Martin

It is hot and sunny July day. I walk along the track leading out of Ilfracombe and find a shady park with views over towards Ilfracombe’s pier. I can’t resist taking a final photograph of Verity, standing pregnant and proud at the entrance to the harbour.

Here an information plaque gives some information about the great sculpture and this is where I first learn that she was created by Damien Hirst. It explains she is “an allegory for truth and justice”, but doesn’t explain why she is partially dissected.

I walk down some steps and find myself in a tiny cove. The way is slippery and I fall over, managing to save my camera from damage. The beach is unmarked on my map, but a sign tells me it is called Rapparee Cove. [Later I learn this is where a terrible shipwreck took place, in 1796, when many lives were lost. The London is a controversial wreck because the ship was probably carrying slaves as well as prisoners of war.]

I climb up the slope on the other side of the cove and then face a long climb up the mound of Hillsborough. This hill was the site of both stone age and bronze age settlements, and its modern name, Hillsborough, is probably derived from the more ancient name of Hele’s Barrow.

The higher I get, the more wonderful the view.  Ilfracombe is laid out like a toy town below me.

But I am in trouble. I know I haven’t walked any long distance for some time, but I have been going to the gym, taking short walks, and think I am moderately fit. Yet, I find myself puffing and my heart is hammering away. I keep stopping for a rest, but every time I turn around and look down at the view, I feel strangely dizzy and faint.

At one point, I wonder if I can continue the walk.

I put on my sunhat and take a drink of cold water. This makes me feel nauseated and the dizziness is worse. I decide I must carry on until I hit a road. Then I will phone my husband and ask him to come and collect me.

But, after the steep slopes of Hillsborough, I find myself in a cooler, wooded area. And I feel better.  I carry on. It’s not far to Combe Martin. Only 3 miles according to my map.

The next cove is Hele Bay. It is rather spoiled by the new holiday homes being built on the far slope. Shame.

I walk out of Hele Bay, following the route of the A399. According to my map, it looks like the South West Coast trail runs along the road itself, but it actually follows a proper path just to the edge of the road. The views are wonderful and the path is lined with wild flowers..

I come to a section where I do have to walk along by the side of the road.

The slopes below are covered in a mass of dense vegetation. I look closer, and see the familiar red stalks and handsome leaves of Japanese Knotweed. Yes, it is that horrible invader.

Further along, I come to a section of concrete, possibly an older route of the A399, and the knotweed has grown right through the concrete, its red stalks rising as easily out of the hard surface as though it was sitting in softest of soils.

I see some signs of dead leaves. Whether anybody has tried to tackle this menace, or whether the dead foliage is a strangled native plant, I don’t know.

At the other end of the tangle of knotweed, I reach the highest point on this section of the A399. And here is a lovely white house overlooking the sea. A coastguard’s car sits in the drive. Does the coastguard and his/her family live here? What a wonderful position.

From here, the South West Coast Path dives down the slope and runs parallel to the coast, before climbing steeply up. It passes Rillage Point, Samson’s Bay and now I am walking up towards Widmouth Head.

At the top of Widmouth Head is a seat on a rocky mound. Unfortunately, a couple of Europeans are sitting on this seat and I have to perch by the side of the path in the shade and wait for them to move on. Another walker comes up towards me – German or Dutch – and stands admiring the view for a while, before turning back.  These are the first walkers I’ve seen all morning. 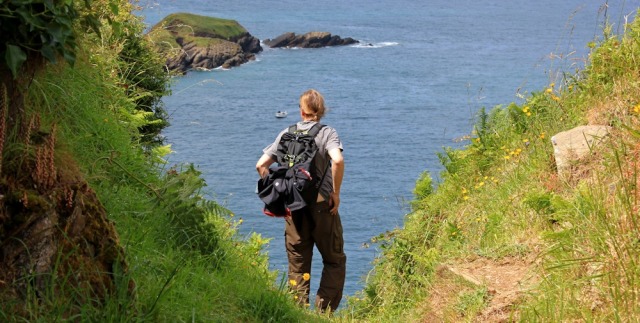 The young couple move off – finally! And I climb up onto the rocky point and look out at the view.

It was worth the wait. Ahead is the lovely cove of Water Mouth with its sheltered harbour. And beyond, tucked around the corner, must be Combe Martin. The sun ducks in and out of clouds and I struggle to take a photograph that properly illustrates the beauty of this amazing place.

The walk down into Water Mouth follows the curve of the slope and is shaded by trees. At the bottom, I find Watermouth Castle – a grand Victorian house, now converted into a themed holiday attraction.

The harbour is full of boats of various sizes and, since the tide is going out, contains a lot of mud. A public footpath leads along the spit of land to the right of the photo below (Sexton’s Burrow), but I am behind schedule and so I stick to the official SW Coast path, and head eastwards.

I pass the entrance to a holiday centre, and then the path crosses a campsite – a proper campsite with tents. The route is clearly marked, but without any of the usual rude signs telling you to stick to the path or else! What a lovely site. It is perfect. With incredible views over Water Mouth bay and Widmouth Head at the far end. I can trace the track of the SWCP coming down off the headland.

There are a number of people out for a stroll here, although none of them get much further than the top of the camp site. I meet a couple who were having a meal in the same pub last night.

I walk past the entrance of a rather fine hotel. A man is taking photographs of a bride and groom in the garden. I remember the other guests in our B&B are attending a wedding today and are staying at the B&B because it is cheaper than the venue. This must be the same wedding.

Apparently the path has been deviated away from the coast, due to land slippage. And so I am forced to walk along the road. Luckily there is a footpath and it is only for a short distance. 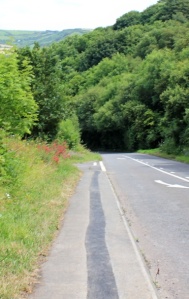 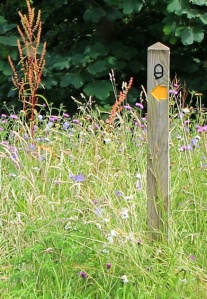 I follow a path down to a shingle covered beach.

And then follow a walkway. Around the corner – and there is Combe Martin. My husband is waiting for me at the pub, with a pint of cider and a large glass of water.

As we wait for our lunch, I check my walking app and I realise I have walked further than I thought – 6 miles, not three. And, after a good meal of fish and chips, I feel better and full of energy. So, I decide I can easily carry on walking for a little longer. 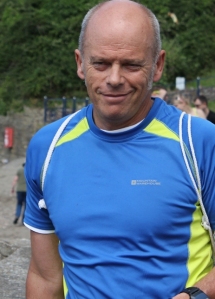 Before I set off again, we take photographs of each other standing in front of the beach at Combe Martin.

I arrange a meeting place with my husband for later that afternoon. My aim is to walk up Little Hangman and then go on to Great Hangman hill.

On my map, scribbled in pencil over Great Hangman, I’ve written, “Highest cliff in Southern Britain”. Must have picked up that fact from somewhere. No time for second thoughts. Onwards…

10 Responses to 146b Ifracombe to Combe Martin