150a Minehead to Dunster

My B&B landlord told me the council say Minehead is a tourist destination, but fail to promote the town. I don’t know if this is true or not, but Minehead has, potentially, much to recommend it as a holiday centre.

There is the Thomas the Tank Engine, for a start.

The West Somerset Railway operates on 22 miles of track, running from Minehead to Watchet along the coast and then inland to Bishops Lydeard. But for some inexplicable reason, there are no regular services covering the 4 mile stretch that links the line to the mainland train service at Taunton. What a shame. I had to travel by bus from Taunton, but would have taken the train if I could.

The station at Minehead is very attractive and bustling with people.

I am walking to Watchet today, but plan to catch the train back to Minehead. So I continue onwards and hit the esplanade.

Now this had to be the saddest seaside sign I’ve come across – a fundraising effort to raise money to build a clock tower for the Queen’s Silver Jubilee. Now long since passed. I gather the charity raising the money has failed to collect enough funds, and has had to modify its plans. The sign gives a really sad impression of the town.

Just next to this area is a crazy golf course and the attached Jubilee Gardens Café. I managed to have a tea and scone their yesterday, but got the impression -at 4:40pm -they were just about to close. In fact, they started clearing away around me as I sat outside. A couple saw me with my pot of tea and went inside to order, but came out a few minutes later disappointed because they had ‘turned everything off’. For goodness sake, boil a kettle! And why shut in full daylight on a beautiful July afternoon? As the disgruntled couple said, if this was a holiday resort in Spain a place in a prime position on the esplanade would stay open until sunset.

In another prime position on the esplanade, a rather fine row of buildings houses an amusement arcade, a boarded up “Queen’s Hall” and a tacky-looking indoor market. And no sea view if you sit in the café. So nice buildings, shame about the content.

Further along are some new apartment blocks. They look attractive. I get the impression they are for permanent residents, not holiday lets. The upper windows have great views across the Bristol channel.

And then there is Butlins. The strange roof reminds me of an upside down milking machine.

The beach may not be at its best today, with the tide out. In fact, it looks more like mud than sand – to be expected I suppose at this point on the Bristol Channel. But it is not a patch on the fine beaches of Woolacombe and Saunton, only an hour’s drive away.

However, I am fascinated by the vast expanse of lugworm casts. And get carried away taking photographs. Each pile of casts is unique and it isn’t long before my eyes are converting random squiggles into recognisable patterns. Here, from left to right, is reluctant donkey, a crucifix above an altar (you need to squint to see that one) and a bicycle. 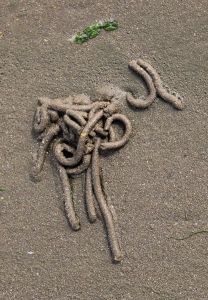 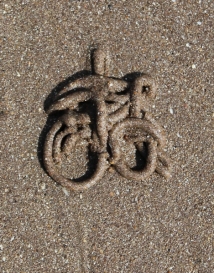 Minehead coast is not completely unattractive, especially today in the sunshine.

The esplanade comes to an end and I join the West Somerset Coast Path. This involves a tramp through a yard and, although signposted, more could be made of this important stretch of long-distance footpath.

The path follows the edge of a golf course. The warning signs are predictable – it’s always the walker’s responsibility to dodge flying balls – but at least they are bright and amusing. There are several people playing golf today. I don’t hear anyone shouting ‘fore’.

A groyne of rocks leads out across the beach. More warning signs. Wales is in the distance.

There are beautiful flowers along the path. And looking back to Minehead, the golf greens glow in the sunshine, while behind the links the peaks of Butlins rise like a strange UFO.

The sun is shining and it’s a perfect day for walking, cool because of the strong breeze from the west. Luckily this means the wind is behind me, pushing me along.

Did I mention the beautiful flowers? Wonderful.

After a mile I come to a place – Dunster Beach. More signs. Private property. Is this sign really necessary? Of course the chalet’s are private, but this is a public footpath along the foreshore. Why not have signs saying ‘Welcome to Dunster Beach’?

Below a bank of rocks, the beach seems cleaner than further along in Minehead. Less like mud. More like sand.  I am standing, buffeted by the breeze, admiring the view, when I hear wild shrieking.

A few seconds later, a horde of young children appear from somewhere inland, and beginning clambering over the rocks towards the beach. They look so cute, kitted out in sun hats and each with their own backpack. And they are all very, very excited.

I head out across the sands, and walk along the wide stretch of Dunster beach. From the shore, the holiday huts peer out at me.

The sand is soft and hard going in places, but I enjoy being on a beach again. I pass a couple of walkers. Apart from the children – and a few people sitting near their cars in the car park – the place seems deserted.

I stop at the car park, hoping to find a café or ice-cream kiosk. But there is nothing here. So I sit on a bench and eat a snack. A lady with a little girl in tow comes up to me. Have I seen a group of small children anywhere? She’s received an urgent mobile phone message – her granddaughter is cold in the wind and she’s brought her a warm jacket.

Yes, I point up the beach. They are about a mile away, at the end of the row of chalets. She sighs and sets off to find the party.

I watch them go, battling against the wind, and am glad to be walking in the opposite direction with the wind behind me. Onwards.

I may have been unduly harsh in my criticism of Minehead’s coastal aspect. And, with Exmoor on its doorstep and the coastal paths passing through it, the place has a lot to offer walkers. But it could do better and really needs to try harder if it wants to successfully promote itself.

In the spirit of positivity, here are my top four suggestions for improvement.

17 Responses to 150a Minehead to Dunster