I’m staying in Kilve and catch the 8:50am bus to Watchet to resume my walk. I’m the only passenger on the bus (a County Council subsidised route) until we hit the outskirts of the town. It is a wonderful sunny day. I wander down to the harbour and take photographs.

At the bus depot (in front of the train station) I didn’t see any signage for the Somerset Coast Path and the trail is not marked on my current OS map . But last time I was here I noted a path running down the seaward side of the railway line, and this is where I start my walk today. Since it runs along the coast, it must be the coast path.

It’s not a particularly attractive start.

The path veers round to the right, following the railway line. But I clamber up the bank, wondering if I can continue along the beach, and am rewarded by a great view of Watchet’s harbour wall.

Striated rocks cover the shore under the cliff. Clearly there is no walking route below. 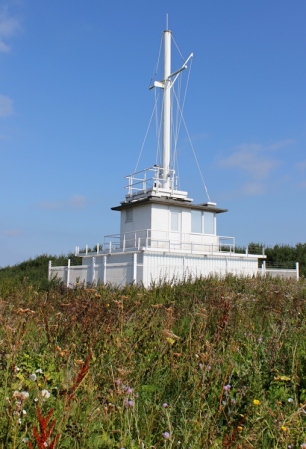 I keep to the path and reach an area of rough ground, with a coastguard lookout point. From the amount of grass and bushes growing around the station, it doesn’t look as if it is used.

At this point, I begin to worry. The area looks like wasteland. There are plenty of tracks through the weeds, and I see some dog walkers. But am I really on the West Somerset Coast Path? Where are the footpath signs and the ammonite way marks?

I approach a man who is walking his dog. Can I get along the coast from here? He tells me if I continue straight ahead I will reach the beach.

[It’s not until later that I realise the official West Somerset Coast Path took a right-angled turn in Watchet and continued inland!]

After battling through nettles, I reach the beach. A sign warns me of mud. But I am relieved to see there are steps leading down and people are walking on the sandy strip at the top of the beach. This must be the right path after all.

Helwell Bay. What an incredible place! The rocks are laid out in long strips, stretching ahead along the beach. I walk along one of these natural ‘roadways’. Wonderful.

As I near the end of the rocks, I look back.  It almost seems as if the construction is manmade, as if the stones have been deliberately laid to provide a series of pathways across the bay. [Later I learn these geological features are called ‘intertidal shore platforms’.]

Ahead, the beach is cut across by a wide, shallow stream – unromantically named, according to my map, as The Swill. There is no path leading inland at this point, but I wade across the stream.

Beyond is a collection of static homes – Doniford Bay Holiday Park – on the other side of which I can see a road rising up a hill. That must be the coast road. Knowing I am trespassing, I stride off through the holiday camp. But, after a while, I realise the ‘road’ is simply an internal track, not a public highway.

The road ends. My way forward is blocked in by thick hedges and cultivated fields. I have reached the highest point and the furthest boundary of the holiday resort. A great place for a photo.

Trudging back through the camp to find the main exit route, I expect to be challenged at the entrance checkpoint. But I’m not. Maybe the guards only stop intruders trying to get in, not scowling middle-aged women trying to get out.

I reach the public road, a minor B route with no pavements. Luckily traffic is very light. I am passed by a couple of cyclists. At the top of the steep hill, I pass the same cyclists taking a breather while fiddling with their tyres. I pass woods and farms and private signs. As roads go, it’s OK I suppose. But not exactly the coastal walk I had anticipated.

I change maps – from the OL9 to the OS140. After a mile, I hit the busy A39 with cars and lorries thundering by, and still no pavement. To avoid certain death, I continue along my B road and into the small village of West Quantoxhead. Here, despite being on a road, signs tell me I have joined the official Coleridge Way, another long-distance footpath.

Time to stop for lunch at The Windmill Inn. Often I arrive at pubs too late for food, but today I am too early! It is not yet 12 midday.  I drink a pint of cider while waiting for the kitchen to open, and then order some excellent crab cakes which arrive, bizarrely, with a full selection of cooked vegetables. 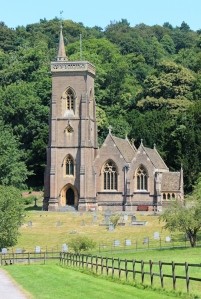 After lunch, I walk down the hill to look at the pretty church – called either St Etheldreda or St Audries.

Beyond the church is what used to be the Amitabha Buddhist Centre, now used as a wedding venue. I would like to explore, but decide I’ve done enough trespassing for one day.

I head back to find the continuation of the Coleridge Way, leading off from the main road, and climbing up the slope of a hill, where I take a photograph looking down at The Windmill Inn.

My new path is broad and skirts around the edge of a deer park at the base of the Quantock Hills. A mile further along and I hope to pick up a permissive footpath that should lead back to the coast.

But I’m surprised to see the familiar ammonite on the signposts. So this path is both the Coleridge Way and the West Somerset Coastal Path.

I’ve rejoined the official coast path at last! How strange. Where has it been?

I come across a bench. At first I think someone has left their lunch box behind. Then I realise the blue box is attached to the bench and I wonder if it’s a very obvious geocache. But the writing on the lid says this is part of the Story Box Project. And inside is a notebook and a pencil.

The idea of the Story Box is that you write a few lines in the notebook to continue the ongoing story. Or, if you wish, you can add a drawing. Unfortunately, the most recent additions appeared to be guest-book type entries – “I was here and enjoyed the walk” sort of thing – rather than continuing a piece of prose fiction. Ah, well. I add a bit about being hot and sweaty. Not really fiction either, but sums up the way I am feeling at the moment.

The view is beautiful. Haze obscures Minehead in the distance, but the fields are glowing in the sunshine.

The path begins to wind through trees. 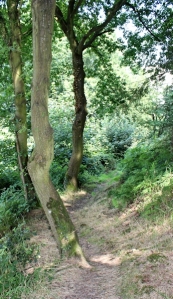 Some parts are really scenic. I love woodland walking.

In other places I have to thrash my way through ferns and brambles, and as I progress the path becomes more and more overgrown. My legs accumulate scratches and nettle stings, and I begin to lose patience with the path.

I am pleased when I find a sign and the beginning of the ‘permissive footpath’ down to the coast. Hooray. Crossing over the busy A39, the path heads across golden fields.

When I meet a solitary woman walker (first walker I’ve seen since the dog walker in Watchet), I warn her the coast path seems to go nowhere near the coast, but she lives locally and already knows this.

Finally I reach the shore, at a headland called David’s Way. I have to take a photograph of the geometric patterns made by the tractor trails through the fields, and echoed in the rocks on the shore.

The next mile is lovely walking, with sea views and wild flowers, although the path is very overgrown in places. More bramble scratches. Ahead I can see the distant hulk of Hinkley Point power station.

It is blazing hot and there is no shade. So, when I reach Quantock’s Head and find a flight of stairs leading down to the beach, I decide to have a rest in the shadow under the cliff.

I am nearly back at Kilve and have plenty of time. So I spend half an hour in this lovely place, watching children playing in the rock pools.

The next photo was taken 20 minutes later. Wow. The tide comes in quickly. The pools are swamped by the sea.

And a few minutes later they are gone completely.

(I am pleased to report the children were unharmed!)

I climb the steps and continue my walk along the top of the low cliff. Some of the land in this section has been deliberately put aside for wild flowers. It is a lovely walk. Soon I  reach Kilve Pill.

I stay on the beach for a while and take more photographs of the cliffs ahead – looking forward to my walk tomorrow – and the rocky ‘roads’ across the beach.

This section of beach – between Blue Anchor, through Watchet, to Kilve, and onwards to Lilstock  – is designated as Site of Special Scientific Interest.
It is rich with minerals, fossils, oil deposits, and dinosaur bones. An unexpectedly wild and wonderful coastline. Shame so much of it is inaccessible for walkers.

From Kilve Pill I walk up the narrow road to the village, where I am staying at the old coaching inn, The Hood Arms. Kilve is listed in the Domesday Book (true fact) and reputedly is the home of a dragon called Big Ben (probably untrue!).

On a sad note, I look up the Coleridge Way Story Boxes on the internet and discover that one of the notebooks has been stolen. It is the same one that I wrote in on the path above St Audries.

The West Somerset Coast Path is possibly the most secret long distance footpath in the world! The path doesn’t yet appear on the latest Ordinance Survey Explorer maps, neither on the OL9 map nor its continuation, the OS140 (2013 edition).

And details of the route are hard to find on the internet, with no dedicated website. I did eventually find a downloadable PDF information sheet produced by Somerset County Council. But the maps are reproduced sideways, which makes them impossible to read on my iPad or my iPhone.

The path’s official emblem is the ammonite. An extinct creature. And perhaps a fitting emblem for this astonishingly elusive path.