164am Chepstow to Mathern

Posted on October 6, 2014 by Ruth Livingstone

Today I am following the Wales Coast Path from where it starts, at the beautiful Old Wye Bridge in Chepstow.

I walk eastward along the southern bank of the River Wye following its route as it heads to join the River Severn.

I am map-less because I decided it wasn’t worth buying the OS map that covers this short section at the beginning of my walk today. And, somehow, I manage to miss the point where the official path turns off  the river bank.

So I find myself at a dead-end beneath two bridges, where I can’t resist photographing the underbellies of their structures.

On the left is the concrete road bridge carrying the A48 into Chepstow. The metal bridge on the right carries the railway line and was constructed in 1962 to replace the original Brunel bridge, which proved too weak. The cast iron, circular pillars are the remnants of the older Brunel bridge, now supporting the modern one.

I turn back and pick up the Wales Coast Path again. It takes me, rather disappointingly, through the streets of Chepstow, around a complex road junction and past the railway station (where I get lost again for a few minutes).

Eventually the path becomes a wide walkway through a wooded area. Very pleasant. But without any view of the river. I know it’s somewhere down there on the left hand side.

I walk past a semi-industrial area, hemmed in by tall fences.

And finally get a chance for a view when I spot a small patch of parkland through a gap.

This turns out to be the site of an old Iron Age hill fort – The Bulwarks Camp – where the Silures, a Celtic tribe, once held out against the advancing Roman Empire. 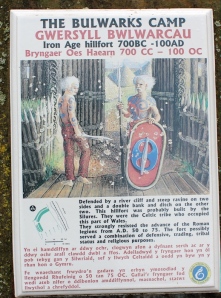 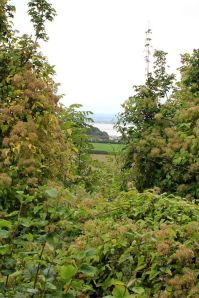 The information board mentions the wonderful defensive position of the fort.

But when I walk across the grass, hoping to take a photo of the view, I find the vegetation is too high to get a decent shot. There is a gate in the fence, but it’s locked.

A number of people are walking their dogs on the grass and, sadly, this historic site now seems to be used as a modern doggy toilet.  Onwards…

A few minutes later and I’m relieved to find myself heading downwards, away from roads, dogs and people, back towards the river bank. A railway line lies between the path and the water. Even without my map, I know this is too narrow for the Severn and so it must be the River Wye again.

I walk through a muddy yard and then the route takes me up into woodland. The tarmac turns to dirt and the path becomes narrow, uneven, steep, slippery and exciting. This is better. At the top of the slope I’m rewarded with a fine view.

Over there is Sedbury Cliff, with the River Severn beneath. I can see the line of bushes, marking the end of Offa’s Dyke, where I stood yesterday before getting lost in the boggy marshes on the river bank below.

From here onwards my walk is through pleasant woodland. Bulwark Woods. I come across signs giving information on the types of trees.

And, I see a weird bird. I’m not a bird watcher, but can recognise the common types I find on my walks. This is one I’ve never seen before. 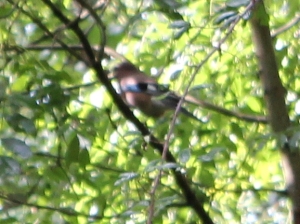 It’s the size of a small blackbird but has a warm-coloured breast and contrasting wing feathers, black with tinges of blue. But the thing I notice most is its massive head, which seems out of proportion to its body.

It flies up from the leaf litter on the ground and I manage to get a fuzzy shot as it perches for a moment on  a branch. I don’t have time to focus properly.

[Later, I look this bird up on the RSPB site and I’m pretty sure it is a Hawfinch, an endangered species.]

The next time I look up hoping to get a glimpse of a rare bird – I see an enormous spider instead. And a giant fly.

Further on and I come across a large metallic coloured sculpture of a fish.

The woodland gives way to fields and I can see across the River Wye to Beachley, with the River Severn beyond. I’m making slow progress.

And then, ahead, I see the Severn Bridge. It looks very elegant from this view, arching up as it crosses from Beachley towards the far bank of the Severn.

The footpath ends in a housing estate. But the route of the official Wales Coast Path is marked out by signposts and by circular symbols set into the tarmac.

I recognise this area. I walked through here yesterday, looking for a pub for lunch. And, soon enough, I come to the subway leading under the M48 motorway.

I take more photographs of the graffiti. I like this friendly crab, who seems to have half my name engraved above its head. LivingSTONE.

On the other side of the underpass I find one of the information signs has fallen down. Was it pulled off the post? Or was it blown off in the rainstorm we had last night? It explains why I’m now walking without sight of the water – “What, no coast?”

The next part of the walk is fairly dull. The path turns inland and goes through pleasant parkland and then around the periphery of an industrial estate. I walk quickly, making up for the time I spent dawdling in the woods.

The industrial estate gives way to fields, and I end up walking across a very boggy (and a very smelly) cattle field. I can hear the animals moving about in the sheds, and am glad they’re locked away. It’s bad enough dealing with slippery cow-pat-mud.

After the farm, the path emerges onto a road and I realise I must have reached the village of Mathern. Somewhere here is a pub, and my lunch stop today. But I am still walking off-map, and can’t find the pub.

I do find a very pretty church. And at this point the sun comes out, making the green grass of the churchyard glow.

Outside the churchyard is an impressive, life-size wooden statue of St Tewdric. 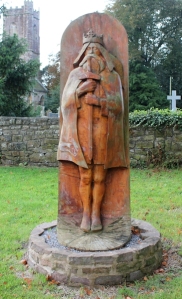 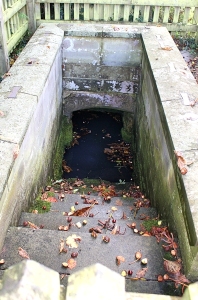 Tewdric was a Celtic king who became a hermit, but later came out of retirement to fight the Saxons. He died from battle wounds and the church is named in his honour.

I turn back from the church and head along another road, still searching for the pub, and discover St Tewdric’s Well.

The well is encased in stonework and surrounded by wooden fencing, spoiling the view somewhat. Is it to keep out children?

I pass under the motorway, following the road into another part of the village, and here is the pub. It does very nice food.

After a delicious lunch, I leave and spend a few minutes outside adjusting my Garmin and checking my phone for text messages. Then I hitch my rucksack over my shoulders and am just about to set off, when the young barman comes running out. I haven’t paid the bill!

I’m terribly embarrassed and follow him back inside, flushing red with shame. It’s the first time I’ve ever done such a thing. And its the first time, he confesses, he’s ever had to chase after anybody for not paying. He seems almost as embarrassed as I am.

One of the few advantages of being an old woman is that nobody suspects you of being deliberately dishonest and everybody assumes you are simply confused. He accepts my explanation  – I just  forgot.

16 Responses to 164am Chepstow to Mathern