I set off full of energy for the climb up to Port-Eynon Point. I need it – the energy – because the path is steep and leads up along a rough track and through a maze of disused quarry workings. It could have been a harsh landscape, but the path is softened by the glowing beauty of gorse bushes in full bloom.

Unfortunately it’s a dull day and the views from the top are disappointingly hazy. But at least it’s not raining and the breeze is gentle, full of the warm-sweet smell of gorse flowers.

I look ahead and down into the next cove, Overton Mere, with its rough beach of shingle and rocks.

After Overton Mere I walk along Overton Cliff and Long Hole Cliff, which is owned by the Wildlife Trust – a change from the National Trust, who seem to own the rest of the coast in this area.

As I walk along the cliff top, I see walkers on a stony path below, and feel the familiar twinge of path-jealousy. Why are they closer to the sea than I am? How did they get down there? I check my map, but can’t identify a public footpath below me.

Later I realise there is a cave in the cliffs – Long Hole Cave – used by pre-historic humans and an important site. Perhaps the path leads there? Anyway, I don’t see a way down and so I continue across the top of the cliffs, watched by sheep and their lambs in the adjoining fields.

It’s a Saturday and perhaps that explains why I meet other hikers today, after several days of trekking in splendid isolation. They all seem to walk faster than I do.

Perhaps I’m slow because I keep deviating from the official path, choosing to walk as close to the cliff edge as I can, not wanting to miss out on the views.

I constantly check my map, loving the names of the landmarks. Common Cliff, Foxhole Slade, Horse Cliff. The photograph below is taken above Deborah’s Hole and looking towards Worm’s Head, which is somewhere in the mist ahead. The strange triangular rock just below is called The Knave, I think.

The rocks are amazing. Look at the folds! It reminds me of the Jurassic Coast in Devon.

I come across an area where the gorse has been burnt. Luckily, gorse bushes don’t mind the occasional fire – in fact they enjoy repopulating burnt ground. I walk through the charred bushes to regain the path, and get my trousers covered in black streaks in the process.

I wonder if this fire might have been started deliberately? It seems to be a national pastime in Wales – lighting fires and setting the countryside ablaze. The local news has been full of it: 49 deliberate grass fires in 12 hours.

Ahead the ground falls away and the path leads down into a narrow valley, unnamed on my map. A signpost says it’s Rams Grove. Down I go, and up the other side.

When I reach the top again, I see the mist is beginning to clear. The hill ahead has been constantly covered in a cap of cloud up until this point. Now it suddenly becomes visible and I realise it must be Rhossili Down (although I have no idea why we call high ground a ‘Down’). Lying just below the hill is the village of Rhossili.

Rhossili is the endpoint of my walk today, and looks surprisingly close. But my path is going to loop around along the coast and I realise I still have a way to go.

I stop for a snack on a cliff. It’s a beautiful picnic spot. Where am I? I think I’m looking over Mewslade Bay, although by now I have passed so many cliffs and coves, I confess to being a little disoriented. I do notice a wonderful narrow path that runs along a steep slope above the rocks on the other side of the bay. I’m looking forward to that!

After my snack, as I walk back towards the official path, I trip and stumble over uneven ground. I must be getting tired, I think, and then I see a National Trust sign. I’m on Pen Thurba Head, and the bumps in the ground are all that remains of an ancient fort.

Another valley ahead – Mew Slade. Before going down, I stop and take a self-portrait.

At the bottom of the valley, I see the official Coast Path heads straight back up the other side, to regain the top of the cliffs.

But I decide to follow the narrow path I saw from above.

First it leads down towards the sea and then it turns upwards and curves along the side of the slope. It looks far more interesting than the official way – although I realise it could be a sheep track, leading me to a dead-end. (I’ve experienced that so many times!)

On the way up I meet a group of young people coming down towards me, carrying enormous rucksacks. They are oriental in appearance, Chinese I guess. (I remember my bus driver telling me that there are a lot of Chinese tourist in Rhossili, because it features in the top 10 most beautiful places in the world to visit, or so he said.)

I ask if they have come down from the top. I see one of them, a young man, processing my words and then thinking for a moment before he answers. ‘Yes,’ he says, ‘we have come down.’ ‘From the top?’ I ask, wanting to be sure. Another hesitation as he gropes for the words. ‘Yes, but it is a little bit difficult. Loose stones.’

Then a young woman joins in the conversation. They are heading for a campsite. She waves a hand vaguely inland. I ask if they are carrying their tents on their backs and she nods. I sympathise with their heavy loads, but I am also reassured. If they can make it down with laden rucksacks, then I must be able to make it up safely with my tiny backpack. 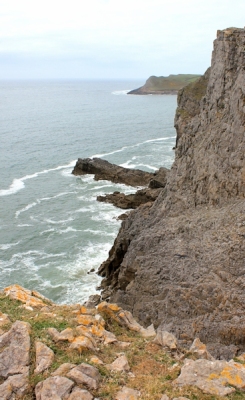 The path turns out to be far more dangerous than I anticipated.

Loose stones are not the problem. It gets steeper and steeper, and  narrower and narrower  – until at one point it just seemed to disappear off the edge of the cliff!

But a quick look around, and I realise where the path has gone.
Round the corner.

If you can call it a path now.
Really it’s just a narrow ledge.

The photograph makes it look far wider than it actually is. Less than a foot across in places. The drop below is precipitous.

I feel my heart thumping.
Don’t look down, I tell myself.
And, if they did it, you can too.

Looking back, you can see the ridges across the cliff. My path is one of those ridges. No wonder it wasn’t signposted as the official path!

From here onwards the way seems easy in comparison. There is a beach below. People are on the sands. This is Mewslade Bay and then Fall Bay.

Filled with confidence, full of adrenaline and feeling invincible, I choose to ignore ‘footpath closed’ signs and walk along the slope just above the beach.

The path is crumbling beneath my feet, bushes hanging with their roots waving in the air where the soil beneath has slipped away. No wonder it is closed: sometimes the path is reduced to a few inches of broken earth. But, compared to the rocky cliff I’ve just experienced, this seems tame. True, one false step could lead to a nasty tumble into gorse bushes below. But that would only lead to scratches, not death.

After the beach, my ‘closed’ path slopes gently upwards to join the official coast path. A couple of cyclists, seeing where I have come from, head along the same route on mountain bikes. I nearly shout after them to warn them, and feel guilty for having given them the false impression the route was safe. But, a few moments later, I see them turn back.

Looking back the way I’ve come, I take a photograph. You can see the official path in the top left hand corner. The ‘closed’ footpath is below, just above the rocks and the beach.

I walk onwards, round another corner, and there is Worms Head. From this point of view, it looks like the back-end of a sleeping dragon.

I was planning to walk out to the tip of Worm’s Head. But the tide is high and the causeway is covered. Signs warn of DANGER, the crossing is only safe 2 hours on either side of low tide. I have two hours to wait.

Hungry now, I head inland towards Rhossili and, as I climb the slope up to the village, I get my first glimpse of Rhossili beach. A lovely curve of sand.

I’ve been here before, as a student. One of our fellow students has a mother who had a holiday home in Gower. Still has. And a group of us came here once for a holiday. But I have no visual memory of the place. Strange. You’d think I’d remember this lovely beach, but at the time I was fresh from living in the Bahamas, so I may have been unimpressed!

I look back and take another photograph of Worms Head. It looks more like a dragon than a worm. [Later I discover it was called ‘Wurm’ – meaning ‘dragon’ – by the Vikings.]

I walk along the path, now a tarmac road, towards Rhossili. It’s a popular place with tourists.

At the top I have lunch (fish) in the pub. Then I have tea and cakes in the café. The views are wonderful.

I was planning to walk back down to Worms Head for 5pm, the earliest crossing time. But instead I feel too full, and too tired, to make the effort, and I just sit in café and enjoy the view over the beach. Maybe tomorrow…

18 Responses to 179 Port-Eynon to Rhossili