I’m feeling better today, apart from a persistent cough. I park my car at the top of Newborough Forest, and walk down a woodland track…

… until I reach the coastal path at the point I left it yesterday.

This is a wonderful time of year and one of the best seasons for walking. It’s the end of April and the trees and bushes are just beginning to turn green but haven’t yet developed the heavy foliage that will later obscure the views across the landscape.

And the gorse bushes are glowing with new blossoms. I love these golden flowers and their delicious scent.

I follow the coast path northwards as it skirts the edge of the forest and then strikes out across a long bank towards the village of Malltraeth, where it becomes a cycle path.

This bank, in common with so many others like it, is called The Cob. It separates an inland area of marshy land from the sea.

At the end of The Cob is the Afon Cefni, crossed by an interesting bridge with valve gates. These gates were designed to close when the tide is flowing in (in order to protect the low-lying land beyond from flooding with sea water) and open when the tide is flowing out. But I’m not sure if the valves are still in operation, because there seems to be a freely flowing channel through the nearest part of the bridge.

Just beyond the bridge the coast path cuts off to the left, turning muddy and passing behind the back of several gardens.

Surprisingly, this section seems crowded, with a chain of elderly gentlemen carrying planks of wood, huffing and puffing under the weight of their burdens. At first I think someone is mending a garden fence along with the help of their neighbours, but then I realise the group are busily constructing a boardwalk.

Turns out the workers are the Silver Slashers, an offshoot of The Ramblers, and they go around Anglesey repairing and improving footpaths. Today they’re constructing a boardwalk to raise the path above the mud. What a wonderful group of people!

… along roads and past fields.

This large white bull seems to be blissed-out in the sun. But I make sure I stay on the safe side of the fence.

… and, of course, a post office van. Feels like a day’s walking wouldn’t be complete without spotting one.

On and on the road meanders…

… until I come over the brow of a low hill and see the village of Aberffraw ahead. That’s my destination this morning.

The road leads me down into what I guess was once a wide river valley, but is now overrun by a mass of vegetated dunes. At this point I could either stick to the road and head straight towards Aberffraw, which is only 1 mile away, or take an alternative route through the dunes.

I turn off into the dunes, of course.

Maybe it was a mistake? The first stretch is very muddy. Pretty much a swamp, to be honest. I’m always amazed how much water seems to accumulate in a dune system. You would think – with all that sand – it would just drain away.

The driest route seems to be on the higher ground against the boundary fence, which is where the path runs.

And, finally, I end up by the sea again.

This beach is called both Traeth Mawr and Aberffraw Sands, according to my map, and is covered at high tide. But now the receding waves have left a tracery of zigzag lines across the sands.

I walk to the end, where the beach is interrupted by the river, and turn to walk up the banks of the Afon Ffraw, which looks more like a continuation of beach than a river bank.

For the first time since I left Malltraeth I meet other walkers – dog owners and casual strollers, not long-distance hikers. And when I reach the road I see several large coaches are parked with hordes of young people milling about. Is it a university or college outing? Perhaps a geology or biology field expedition?

I cross the bridge and head into Aberffraw, where there is a pub. And I find my appetite has returned. It’s the first meal I’ve properly enjoyed for several days.

After lunch, I catch the bus back to my car in Newborough Forest and, while changing from boots into shoes, I catch sight of a squirrel running up a tree. 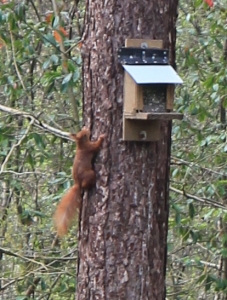 Yippee! I was hoping to see one. Anglesey has managed to eliminate the grey variety, allowing the native red squirrels to thrive.

Full of enthusiasm, I set off along a nearby walk, the Red Squirrel Walk, convinced I will see many more. An hour later I return to my car having failed to see a single squirrel during my circular tour.

My plan this afternoon is to return to Newborough Warren and make my way through the enormous stretch of dunes (a larger system than the one near Aberffraw) and reach Abermenai Point.

The official coast path bypasses the Newborough Warren dunes completely. So why do I want to walk to Abermenai Point? Firstly, it’s in keeping with my rule number two: stick as close to the coast as possible. Secondly, when I stood on the other side of the straits a few weeks ago, right at the tip of Fort Belan, I saw my future-self standing on the dunes at the Point. ‘One day soon, I’ll be standing there,’ I thought. (Once I get an idea in my head, it’s hard to shift it.)

I’m doing this section of the walk out-of-turn. That’s something I try to avoid, but my map has the following warning in red letters:

‘WARNING.
Access Land and Public Rights of Way to Abermenai Point can be dangerous under tidal conditions.’

The wording is a bit vague, but I take it to mean the dune path might be dangerous at high tide. That’s why I waited until this afternoon, when I knew the tide would be out.

The walk doesn’t get off to a good start. The ground is very waterlogged. And a sign tells me I must stick to the path, which is fair enough…

… if only I could work out where the path actually is!

I splash through pools and wade through marsh, until I eventually reach the shore. But where am I? Where’s Fort Belan? I check my Garmin and realise that Abermenai Point is still a mile away and the footpath continues straight towards it. Really? Across that stretch of water?

I take a self-portrait photo. The footpath should continue directly behind me in the photo below. Abermanai Point itself is right behind my head.

Am I’m expected to walk on water? Clearly there is no way across. So I turn and begin to follow the edge of dry land, which curves around in a wide circle.

When I eventually reach the sand dunes on the far side, it is considerably later than I anticipated. Past 6pm. I know I have 2 hours of daylight left, but the bright light of the day has faded and dusk seems to be falling already.

I cross the dunes, aware that I’m not supposed to be here at all, as I left the path a long time ago and this is a protected National Nature Reserve. It’s a relief to see the shore on the far side. There’s the mouth of the Menai Strait, with Fort Belan across the water, and the mountains of Snowdonia behind.

I walk along the beach. And must confess I don’t make it all the way to Abermenai Point, spooked by the fading light, the soft sand that make every step an effort, and the complete absence of any other human being within sight. Instead, I get pretty close to Fort Belan. And take a photo with my camera on full zoom.

Fort Belan isn’t exactly pretty. And the light is too dim for a decent photograph. But at least I’ve done it. Or almost. Near enough, anyway.

I turn back and retrace my route along the beach. On the far side is wonderful Llanddwyn Island, with its two daymark towers visible as tiny punctuation points on the skyline.

After a couple of miles, or so, I reach the point at which the official coast path joins the beach. Here I turn inland and follow the track back along the edge of Newborough Forest.

During the last mile of the walk, the evening sun comes out from under the clouds and turns the world a golden-yellow. Ahead I can see the tops of the Marram Grass sculptures that form the centre point of the car park. My walk is nearly over.

The sunshine arrives too late! If only I’d had this wonderful light while walking towards Abermenai Point. Maybe I’d have carried on to the end, after all.

12 Responses to 236 Newborough to Aberffraw