I return to West Kirby. The lifeguards are back. And the route to Hilbre Island looks enticingly easy… I’m nearly tempted to walk out again…

Onwards, following the coast, along a track running beside the shore which has changed from beach into marshland. This route is not marked as a public footpath on my map, but seems well used. Ahead is Hilbre Point and Hoylake.

At Hilbre Point there are private houses bordering the shore. I clamber over rocks, looking for a way around that doesn’t involve walking along the road. I follow a girl, who seems to know the way, until she stops and sits down.

Hmm. Well, I continue. The rocks here are the same amazing red colour as the rocks over on Hilbre Island. Not surprising, therefore, that this rocky outcrop is called ‘Red Rocks’, according to my map.

I get around the point successfully (don’t know if it’s possible at high tide) and now I’m walking along the northern shore of The Wirral Peninsula. Ahead stretches a long beach. Actually, it’s a cross between a beach and a marsh, because even here it looks as though the sea has been driven back and vegetation is trying to reclaim the shoreline.

Further along and sand predominates. Acres and acres of sand. The sea is a thin line on the horizon.  I pass a group of horse riders.

And then I take to the promenade. Here is an old Victorian monument – a drinking fountain erected in honour of Queen Victoria’s Diamond Jubilee. It looks in good condition [and later I learn was restored, thanks to a grant, in 2008].

Otherwise, the promenade is a featureless place. And it goes on, and on, and on…

… until eventually I reach slipway with boats waiting for the tide to rise. It’s creeping in now – the water unexpectedly sneaking in along a channel from the east, rather than coming in directly across the vast expanse of sands.

The sloping embankment catches the sound of the waves and amplifies it, creating the sensation of rushing water. I’m walking along a shared cycle/walking route. More cyclists than walkers are out today.

I’ve left Hoylake behind. Ahead is Leasowe, with its lighthouse – an impressive white tower surrounded by the rolling grasses of common land. The lighthouse is, apparently, the oldest brick lighthouse in Britain, and once featured a female lighthouse keeper. It is no longer in use.

Beyond Leasowe Common is a golf course, dominated by a hotel – The Leasowe Castle Hotel – where I am staying for a few nights.

Built in the 16th century, the castle originally consisted of a single, octagonal tower. Later other towers and buildings were added, until the castle was abandoned and fell into disrepair for a time, before being extensively rebuilt. It was used as a convalescent home for retired railway men, and during the first world war held German prisoners. Now it functions mainly as a wedding venue at weekends, and a rather nice hotel during the week.

Onwards. I walk past the golf course and reach a corner in the promenade. Ahead are the red cranes of the Liverpool dockland.

I turn the corner… and am surprised to see a curving stretch of sandy beach. After miles and miles of concrete, this make a wonderful change.

Beyond the beach, and I’m back on the promenade. I reach New Brighton, part of Wallasey. A road runs to my right, while to my left is a high concrete wall, shaped to form seats. Why anyone would want to sit on these seats, overlooking the road and buildings of Wallasey rather than the sea, is a mystery. But apparently people do.

It’s a Friday afternoon and parents are strolling with their children. From a young child’s perspective this must be an incredible boring walkway – because they’re too short to see over the sea wall!

Neither can these fishermen actually see the water. A weird way to spend the afternoon.

I reach the far northeastern point of The Wirral Peninsula. It’s a place called New Brighton, part of Wallasey, and here is a rather nice swimming beach, and another lighthouse – this one is in working order.

At the far end of the northern shore is a fort.  Fort Perch Rock. Built during the Napoleonic wars, the fort is constructed of the same red sandstone that dominates this area. It’s an impressive building, but turned out to be an unnecessary defensive structure, because it only fired its guns once or twice – targeting a harmless Norwegian ship by mistake and, luckily, missing the vessel while, not-so-luckily, managing to shell Hightown on the other side of the Mersey instead.

The fort is open to visitors, but I don’t have time to stop. Onwards.

Now I’m walking southwards up the River Mersey. And here I am surprised to find more swimming beaches. The river water must be clean.

The promenade is quite crowded at this point. There are joggers, cyclists, families out for a stroll, dog walkers, and groups of chubby young men walking around glued to their mobile phones – Pokémon hunters!

On the beach is an impressive pirate ship constructed out of driftwood. A notice declares it to be an ‘art installation’. Of course it is being used as a wonderful, children’s playground.

Everyone I meet speaks with a Liverpool accent.

Lining the wall of the promenade is a series of information plaques.

I take a closer look. Memorial plaques in memory of merchant ships and their seamen lost during the wars, all erected by a private individual. I pause to read one of the notices. The Tacoma Star survived one bombing raid in Liverpool docks, only to be sunk by a U-boat in the Atlantic eight months later. 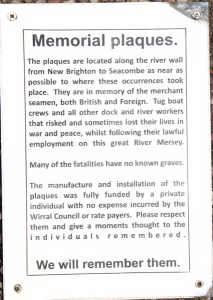 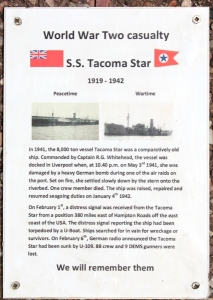 I’m always touched by memorials to merchant seamen. Treated as civilian casualties, they often have no graves or other memorials. My Uncle Peter (aged only 16) died when his merchant ship was sunk by a German U-boat somewhere in the Atlantic too.

Across the water is Liverpool. It looks marvelous. Can’t wait to get there.

But first I have to make my way to the ferry port (cue endless earworm music – Gerry and the Pacemakers Ferry Cross the Mersey – a song I don’t even like, but which now bugs me for the rest of the day!)

Further along and I see a brightly coloured boat chugging along the river. A cruise ship? A joke ship? It can’t be the famous ferry, can it?

I watch it pull up to a landing stage, which a sign proclaims to be the ‘Mersey Ferries Seacombe’. So it really must be the ferry. How disappointing. I expected something more classic. Older.

The ferry terminal building has an impressive tower. Rather sinister looking. Is this art deco style? Later I’m not surprised to discover it’s a listed building.

I go inside to enquire about ferry tickets. There is a cheap commuter service, which operates weekday mornings and evenings, but not tomorrow (Saturday). The alternative is a more expensive river-cruise service, which I don’t want.

The ticket-seller looks me up and down, and obviously decides I need financial help. He tells me I can buy a Mersey Saveaway Ticket, for £5.20, and with this I can travel on all the Merseyside buses, trains and ferries free of any further charge. Perfect! Just what I need.

I walk past the Seacombe ferry building, because I’m heading for the second terminal. This is all rather confusing, but the ferry actually runs in a triangular pattern, between Liverpool on the eastern shore, and two separate terminals – Seacombe and Woodside – on the western shore of the Mersey.

There is the second ferry port, the Woodside Ferry Terminal, dead ahead. And close by is another impressive tower.

And I can’t resist taking more photographs of the Liverpool skyline across the Mersey.

To get to the second ferry terminal I must walk through a dock area. Parts of it are a little grim and, with no other walkers in sight, I feel slightly uneasy.

Am I in Birkenhead now? It’s not clear where Wallasey ends and Birkenhead begins, but I feel I’ve crossed some sort of threshold – moving from seaside resort into an industrial city.

A few minutes later I pass a Stena Line ferry port. Cars and freight. For Ireland, I assume. It’s not shown on my OS map, so maybe it’s a new terminal?

I walk across a swing bridge. Does it still work? I doubt it. Despite the docks around me, I can’t see many ships. Everything on the wharf side has a disused air, and although new buildings are springing up, they don’t seem to be connected to the docks in any way.

The reason I’m heading for the Woodside Ferry terminal is because it makes a convenient starting point for my walk tomorrow. There is no station handy for the Seacombe terminus, but the Woodside ferry port just a stone’s throw away from the Hamilton Square railway station.

The station has a rundown air about it. And I’m surprised to be ushered into a lift. It goes down. I follow other passengers out of the lift, and there are more stairs, still going down. The platform is deep underground – a surprise. It looks like a London tube station.

Later I wonder why I was so surprised. This is the last stop on the Wirral and from here the train dives under the Mersey. The line needs to be deep.

Today was an interesting walk. I started from the rural resort of West Kirby, plodded along one of the longest promenades I have yet encountered, walked up the iconic River Mersey, trudged through a busy industrial area, before descending here into the bowels of the earth under Birkenhead.

21 Responses to 260 West Kirkby to Birkenhead