Posted on September 18, 2016 by Ruth Livingstone

I’m back in Blackpool and staying near a place called Gynn Square. In the morning I set off to catch the tram, and one of the things I notice is a wonderful memorial to honour the emergency service people who lose their lives while helping others.

But the main thing I notice is… Daleks! 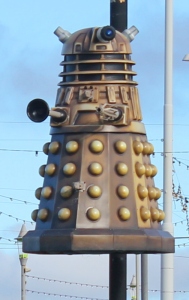 There are several of them. Red and gold and other colours too. Life size.

You can’t miss them because they’re hanging from poles in the middle of a roundabout. One is still on a trailer, waiting to be suspended.

It looks like a weird execution ground for cyborgs.

[Later I realise the Daleks are something to do with the Blackpool Illuminations, which were switched on a couple of days before my visit. At the time the scene just seems weird and surreal.]

The tram is wonderful. I buy a daysaver ticket (which I promptly lose!) and enjoy the ride down the seafront.

I get off at the South Pier and resume my walk, heading northwards. The day is breezy and cool. Good walking weather.

After walking past the pier, I see Blackpool’s Golden Mile stretching ahead.  There’s the Central Pier in the distance. And Blackpool Tower. And the horrible Great Wall has turned into a much nicer stepped embankment – perfect for walking along or just sitting on.

I leave the promenade and walk along the sand. The sea is still a long way out. Is it my imagination, or is it visibly creeping nearer?

The Central Pier is attractive, with a Ferris wheel ride on top.

I walk under the supports of the pier. It’s one of my favourite experiences – walking under a large structure such as a pier or a bridge. (I don’t know why.) So I linger here and take photographs of the rusting pillars and the tangled meshes of seaweed.

Just beyond Central Pier is another pier, and I admire the logical naming structure adopted by Blackpool. This one is called North Pier.

North Pier is more open and less built-upon. And so the supporting pillars are narrower and more widely spaced, making it look more elegant than the other two.

Close to the entrance of the pier is the famous Blackpool Tower. For some reason it never occurs to me I could go UP the tower. I just keep on walking.

As I approach the North Pier, I look back at Central Pier, and am surprised to see the sea has come in and is now well on the way to covering the sands. Crikey! That was quick. It’s only 15 minutes since I walked under Central Pier.

A lifeguard has been rounding up stragglers on the beach and directing them back to the stepped promenade. Now he is trying to persuade two women to come off the sands. They don’t seem convinced it is necessary to move…

… but just one minute later the sea has cut off the sand bank where they were standing, and in only a further minute the water is swirling right up against the wall. [There is only a 2 minute difference between the two photos above and below!]

I’m not sure whether the life guards are usually as vigilant as this, or whether the recent tragedies this month have made them more assertive in removing people from the beach. Last week 5 young men lost their lives at Camber Sands, making a total of 11 deaths by drowning in UK waters in August.

I walk onwards along the promenade. With death on mind, I come across a war memorial. I like the inscription on the surrounding wall: ‘Sing softly. Be still. Cease.’

The Golden Mile is behind me, and now I’m heading along Blackpool’s North Shore, following the lower promenade. My destination is Cleveleys, where I’m meeting my daughter and her husband for lunch. It’s 5 miles away.

I pass a bus station. They seem to be announcing buses over a loudspeaker system, which seems a little strange. But as I get nearer, I realise they’re not announcing bus times, but are interviewing bus drivers. It’s all rather weird. Not as weird as the Daleks, but still weird.

The day has grown hot. The promenade stretches ahead. Above me, but invisible from down here, is Gynn Square, where I caught the tram this morning.

Onwards, and the sea has completely covered the sands below me. (I’m not sure if they’re always covered along this part of Blackpool, or just at high tide.) Last night was windy, and the waves are large and rough, slapping up against the sea wall.

A tower ahead turns out to be an old lift system. I assume it isn’t working any longer? Beside it is a go-cart track, laid out with car tyres, but not in use today.

This area has the same faded-glory atmosphere of so many of the seaside towns I’ve passed through on my trek. Abandoned attractions. An air of shabby decay.

Occasionally I come across slipways leading down from the promenade to the sea. ‘No Access’ says the sign. Don’t worry, I’m not going down there! Much too rough.

It’s a surprise to meet a few cars, crawling along. And then I come across the fishermen, which explains the cars (most fishermen don’t like walking further than they need to!).

One man actually has something on his line. I hang around, but he doesn’t seem in a hurry to reel it in. There are two women fishers among the bevy of men, which is unusual.

Further along and there is no fishing any more. I think I’ve left Blackpool behind now. Above me are green slopes. This might be Norbreck. I’m hot and thirsty, but need to keep moving.

The sea is a frothy mass, seething against the restraining wall. It’s a brown colour and reminds me of Weston-super-Mare. Strange, because Blackpool faces the open sea, not a river estuary like Weston. Why so brown?

Now you run the risk of getting wet as you walk along the esplanade. Ahead a family group are dodging waves. In places there are steps leading down, but now fenced off. The waves take advantage of the gaps to unleash sprays of foam.

The promenade ahead is closed. I’m not surprised. But it’s disappointing to have to turn inland.

I cross the tram tracks. Little Bispham. I check my watch and pick up my pace, not wanting to be late for lunch with my daughter.

Coastal walking is never straightforward. The road veers further inland, but the path along the shore remains stubbornly closed.

I walk around the perimeter of a building site, following a green fence. ‘Phase 2 is coming’.  Well, I wish it would hurry up and arrive – and give us back our coastal path.

I text my daughter. ‘Will be a little late.’  Now I must do some road walking – along a busy road, until I can cut back towards the shore again.

The promenade remains out of bounds. I walk down the coast road, among fences and cones, until I see the end of the construction works ahead. And a promenade!

This must be Cleveleys. Now, where’s my daughter?

Later I learn the bus rally I passed was the Bus Driver of the Year awards, which is held in Blackpool every September.

9 Responses to 268 am – Blackpool Golden Mile and North Beach