Yesterday it rained heavily and solidly. I couldn’t face walking, and went to look around Culzean Castle instead. Today’s forecast promises sunny intervals and no rain (hooray!), so this morning I catch the bus back to Ballantrae and resume my coastal trek.

I walk along the sea front, past a dilapidated boat on the grass, past a sign warning me about suicidal cars, and past an old brick pier where one sad and lonely boat is moored.

Onwards. Along the beach.

The tide is going out and the sand is gleaming, newly washed. My OS map shows a straight coastline, but my eye shows a curving bay. (I’ve noticed this often happens, and I wonder if it’s an optical illusion? Or is it due to the map makers not keeping up with the changing high tide mark?)

Anyway, straight or curved, I should be able to walk along the beach without interruption until I reach the far headland, Bennane Head.

Out to sea is Ailsa Craig: a dramatic volcanic plug, rising over 1,000 feet above the water, and home to thousands of gannets, a few puffins, and the famous granite used for curling stones. You can take a boat trip out to visit the island if you wish, but be warned: due to all the gannets – the whole place stinks! 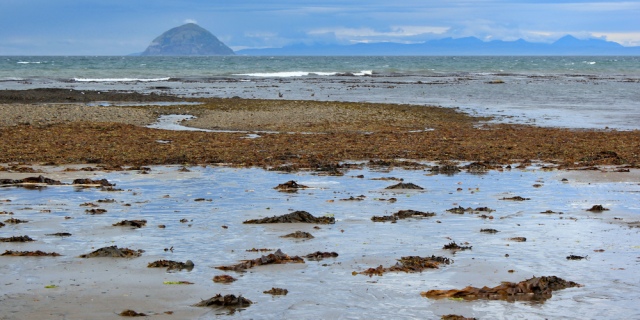 Nothing smelly about this lovely section of beach. Sand and flat rocks. Easy going.

The only other person I see is a farmer with a bevy of collie dogs. About eight or nine – hard to count because they run around like maniacs. Why so many? I wonder if he breeds them? Or trains them?

I’ve nearly reached Bennane Head. Unfortunately, the official Ayrshire Coastal Path leaves the beach at this point and follows the A77 for several miles. Shame.

As I get nearer, I realise I can see a track going around the seaward side of the hill… I wonder if it’s worth trying to follow it?

But, I have a moderately long walk planned today, and really don’t want to have to turn back, neither do I want to meet an angry farmer, and I particularly don’t want to find myself in a field full of hostile cattle.

By the time I reach the headland, I’ve made up my mind. I’ll stick to the proper path.

Here’s a sign. Cross the A77 and “Follow fence path north for 1500m then re-cross.” Good. That sounds clear enough.

But I’m not sure what is meant by a “fence path”. Beside the road is a crash barrier, and no path. Down the slope is a fence, but no path either. Oh well. When Gillian walked this route a few months ago in April, she describes walking just next to the crash barriers, and so this is what I do too.

I pull on my high-vis vest. Not the busiest of roads, but the traffic really thunders by, and so it’s not a pleasant walk. And relentlessly uphill to start with.

At one point I manage to get on the other side of a fence where someone seemed to have cleared a path… but only to soon find my way blocked by a bunch of brambles. I’m forced to turn back

Further along, and the Ayrshire Coastal Path sign indicates I really should walk next to the barbed wire. But the ground is uneven and overgrown with weeds, including thistles, nettles, and brambles.

So, basically, I stick to whatever clear path I can find by the edge of the road and keep my ears open for traffic, dodging into the longer grass whenever a vehicle approaches.

I’m relieved to come over the brow of the hill. Good, all downhill from here, I hope.

Gillian warns that the road section lasts for 3 miles. I had hoped she was exaggerating, but in fact I think it’s more like 4 miles. It seems to go on and on… but at least you get the occasional splendid view. There’s Carleton Bay ahead.

I soon get used to the whizzing traffic. The roadside grass is short and walking is easy. I fall into the familiar rhythm and drift off into a gentle state of reflection… thinking about writing and whether I should self-publish my novel, or not… and I really want to put together a dossier on dangerous encounters with cattle… and I MUST publish a book on walking the Wales Coast Path (which I finished last year) while it is still fresh in my mind… and wasn’t it nice to meet another coastal walker yesterday – the friendly Kieran Sandwell who is walking the coast to raise money for the British Heart Foundation…

And then something makes me jump into the air – dodge to one side – heart thumping.

It’s an adder. Coiled up and fast asleep in the grass.

Yikes! I nearly trod on it!

By the time I get my camera out, the creature is awake. It rears up and we eye each other warily.  Then it slinks off, sliding quickly into a patch of longer grass.

This makes the 6th adder I’ve seen on my coastal walk. (I think this one was a female, because it was a brownish colour, but I’m not sure.)

I don’t meet any more adders, but do eventually reach the end of this section of road walking. Just after a holiday park – and past a row of palm trees (very tropical!) – I can head down to the shore.

This is much better! What a beautiful place. The beach is covered in interesting rocks and, with the tide coming in, the views are wonderful.

I notice a plastic crate washed up on the high tide mark. The writing on its side catches my eye. “STOLEN FROM ROLAND BALLIEUL DUNCANNON”. Makes me smile.

(In my younger days, the restaurant in London called Borshtch N Tears was THE place to eat. It’s crockery was labelled “Stolen from Borshtch N Tears”. This, of course, seemed like an invitation. I’m sorry to admit it, but I still have a side plate.)

Thinking of restaurants makes me hungry. I perch on a rock and eat my snacks. Then use the same rock to balance my camera. Time for a self-portrait.

Out to sea, Ailsa Craig is looking magnificent. I take far too many photographs of the rock. Every time I look at it, it seems to have put on a different face.

Onwards. My pace slows down because the beach is littered with rocks and I have to pick my way with care. Never mind. Give me rocks over roads any day!

Ahead is Lendalfoot. On my map, the name appears in largish, dark letters, implying it’s a biggish place. It’s not.

At Lendalfoot, the beach is interrupted by a rocky outcrop and some dilapidated sheds. I take to the road again.

Ahead is another curving bay (again, my map shows a straight coastline!) and a high ridge in the distance.

I walk along the pavement beside the road until I come to the memorial. It’s a landmark mentioned in several descriptions of the Ayrshire Coastal Walk and was erected in memory of “Archibald Hamilton and Crew” who “were drowned near this place September 11th 1711.”

The memorial is an important landmark for walkers, because it’s the place where you can rejoin the beach. Hooray!

But only for a mile or so. Then the beach comes to an end in a scrumble of rocks. At this point, the Ayrshire Coastal Path crosses the A77 and takes an inland route along a track.

There’s an ominous sign on the gate to the track, warning about sheep with lambs and cattle with calves (oh dear). But the only alternative is to follow the road – and there’s no pavement. I decide I’ll have to risk meeting cows… onwards.

The track curves upwards through what looks like an old quarry. According to the wonderful Gillian’s Walks blog, I’m now following an old coach road.

As I climb higher, I enjoy the views. Here I can look back down towards Lendalfoot, over an interesting landscape of varying textures – striped agricultural pastures, hilly moorland, and rocky curves of the shoreline.

My track deteriorates into a rutted route. I pass through gates, keeping an anxious eye out for cattle. So far, so good.

Over the shoulder of the hill and the path becomes a proper track again. Below me is the A77 and, despite the fact I’m taking a more inland route, I’m really glad to be up high, away from the traffic, and with wonderful views.

I’m walking along the slopes of a ridge of high ground, made up of several hills. I pull out my map, because I like to note the features in the landscape as I pass through… but it’s hard to make out where one hill begins and the other ends.

My route takes me past Pinbain Hill, Kilranny Hill, Bellmoor Hill, Lochton Hill, Shiel Hill – all lower sections of a mass with twin peaks made up of Grey Hill (297 metres) and Fell Hill (266 metres).

Ahead is Kilranny radio mast, and a farmhouse.

The farmhouse is decaying, with a collapsing slate roof, and holes where doors and windows once stood. I stop to take photographs – because I’m slightly obsessed with ruined buildings!

The old farm now stands in a field of sheep. I keep the building on my left, and follow the track downwards.

Near the bottom, knowing I must soon rejoin the A77, I decide to stop for a rest and a snack. To my delight, I discover a pretty waterfall and climb up onto a hillock – displacing several irritated-looking sheep – so that I can sit and admire the tumbling water.

Feeling refreshed, I continue following the track, and then stumble along the edge of a sheep field, before the path takes me down to the road.

This is Ardwell Bay and I’m delighted to discover I can clamber over a barrier of rocks (rip rap sea defences, I presume) and walk along the beach instead.

I’m falling in love with Ailsa Craig. A permanent fixture on my left, but with constantly changing moods. Never boring. Always beautiful.

And I’m also getting a great view of the Isle of Arran. It’s profile is supposed to look like a sleeping warrior. From this angle… hmm… maybe. With a very small head?

The rocks that cover the beach are dramatic. Long strips and ridges. It almost looks as if a giant has been doing some rather clumsy road building. I’m always in awe of such structures, because I know I’m looking at millennia of geological history laid out in front of me.

I’m guessing that a huge river once flowed here and these striated layers represent sequential deposits of mud and stones. After that, some gargantuan tectonic force must have tipped the crust over so it now lies sideways, with the layers exposed.

Of course, I might be completely wrong about the river. I’m no geologist.

This pleasant section takes me a long time to cover, because I’m constantly stopping to take photographs and to just stand and stare. After a while the rocks become more difficult to navigate –  interrupted by little streams and with the tide high – and so I alternate walking on the grassy verge with walking on the shore.

The final section, as I approach Girvan, I take to pavement-walking alongside the A77. The official Ayrshire Coastal Path sticks closely to the beach instead – but I’m tired!

Girvan is a surprisingly large place and with a substantial amount of industry. This approach to the town is pretty, with a wide, flower-covered bank above a shingle beach, and a good promenade/cycle way.

My car is parked close to what passes for a bus station. It’s a circular turning place at the end of a road called Elder Avenue, and slap bang in the middle of a housing estate.

24 Responses to 331 Ballantrae to Girvan