Posted on September 11, 2017 by Ruth Livingstone

On a beautiful, clear morning, I park by the shore near Machrie, and catch the bus back to Blackwaterfoot. The harbour looks very attractive.

Today is a walk of two halves. The first half is glorious, the second half… well, it will turn out to be a bit of a slog. But let’s start at the beginning…

I follow the road and head north out of Blackwaterfoot. The main road swings round to the right, but I carry straight on, down a dead-end lane that leads to the golf course.

An information board tells me this is where the Arran Coastal Way runs. It’s only 5.5 miles to Machrie, where my car is waiting. I’m not sure if I believe the sign, because most of my walks turn out to be far longer (according to my Garmin) than the official distance.

I hear a clanging noise behind me and turn around. It’s a couple carrying a golf bag, with the clubs jiggling around inside. I stand aside to let them pass.

Onwards, and I soon leave the road to walk along the sand. I think this is the best beach I’ve come across so far on Arran. Easily accessible and perfect if you have children. But, on this fine day, it is virtually empty. Just a few strollers and dog walkers in the distance.

It’s one of those perfect moments at the beginning of a walk, when the day is full of promise, and I’m filled with a happy energy. The sun is warm on my back. Gentle waves roll across the rippled sand. I take dozens of photographs. 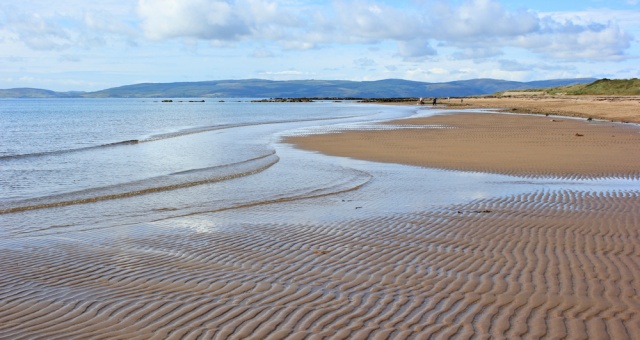 Further along, a family is climbing along a line of rocks that stretch out into the sea. They’re silhouetted against the gleaming water. In the distance… Ailsa Craig peeks out from behind the headland.

I reach the end of the beach. This is Drumadoon Point. (What a great name! Sounds like something out of a pirate adventure story.) I walk over a flat area of grassland, while ahead towers the craggy mass of… I check my map… the Doon Fort. Does that mean there’s an ancient fort on top of the cliff?

To my right is the golf course. A sign suggests it is too dangerous to walk over the links, and better to climb over the rocks by the shore. Hmm. I’m not convinced this is the safer route, as it requires scrambling on hands and knees.

As I crawl over the stones, I look up and see the couple who passed me earlier. He is hitting the golf ball but she appears to be an observer only. I know many people love the game, but it really doesn’t appeal to me at all.

I leave the golf course behind. It’s slow going. The coastal way here is really rugged and I have to watch every step. This is going to take me ages.

I clamber over a tricky section, and then sigh with relief as the path improves. Time for a self-portrait.

Further along, and people have created piles of stones. Each one is a feat of balancing skills. These little structures are both appealing and a little uncanny at the same time.

Down on the shore I spot a few sheep. At first I think they must be goats – but, no – they’re definitely sheep. It’s unusual to see sheep standing on wet sand. I look around to see where they might have escaped from… but I can’t see any nearby fields. Just rocks and cliffs.

The path here is well worn, but I don’t meet any other walkers. This seems very strange. It’s only the 1st September and I’m walking the Arran Coastal Path the wrong way (I always seem to end up walking the wrong way!). Therefore, I would expect to meet anybody who was walking this same section coming towards me.

The path begins to rise up the side of the slope. This is perfect coastal walking. A beautiful day, a well delineated path, and great views.

Ahead are a series of caves. A signpost points the way towards them. “King’s Cave”. Which king, and why he was in a cave, isn’t made clear.

Down by the shore are more constructions of balanced stones.

I clamber up to the mouth of one of the caves…

… and peer into the dark and damp interior. The floor doesn’t look very comfortable – covered in rocks. And here, inside, are yet more piles of stones. People have been very busy creating all these little towers. Seems a tad obsessional to me.

The largest cave has a metal fence in front of the entrance, although the gate is open. A large spider dangles from the bars. A spider? Somebody has a sense of humour.

[Later I learn the King’s Cave is where Robert the Bruce hid after he was defeated in battle, and where he learnt a lesson in patience as he  watched a spider repeatedly trying to build its web. Allegedly. Apparently there are several caves that lay claim to being the King’s cave! You can find out more here.]

Several people arrive. A group of young people, and a family with two dogs, climb up to the caves.

Further along, a group of ladies in walking gear are sitting on a large rock, sunbathing. Ah. That’s where all the walkers are! Lazy things.

The path leaves the shore and climbs up the steep slope above the caves. I meet an older couple coming down. They tell me I’m walking the right way round, because I’ll get to enjoy a lovely view in a minute, while they must keep stopping to look behind them.

They’re right. As I climb higher, the view is wonderful.

At the top of the cliff, the path runs along the edge of a woodland. The views are even more wonderful. Lush farmland, dotted with sheep, and the blue waters of Machrie Bay. In the distance, are the mountains of the northern part of Arran.

I sit on a bench and eat my snacks. Really, I could stay up here for ever.

A man walks past me. He’s come up from the shore and is carrying a string bag over his shoulder. It is stuffed full of shells (cockles?) and drips water down the back of his jacket. The bag looks heavy, and I admire his stamina up the steep slope.

Called amanita muscaria, or fly agaric, these mushrooms when intact look just like the toadstools out of a children’s story book. These are less impressive because they’ve been nibbled by something… not by me, I can assure you!

My woodland path ends in a car park, and from here I join the main road. There are no pavements, but the traffic is very light. I’m really not fond of road-walking, but the wonderful views make up for the tarmac slog.

I reach Machrie. I was expecting more of a village, but it’s really just a string of cottages strung out along the road. There is a café too – a “tee” room. A pun. Yes, Machrie might be tiny, but it has its own golf course!

At the far end of Machrie is my car. But I’m still full of energy, and it seems too early to stop walking for the day. I check my watch. There’s a bus that comes down this road in 90 minutes or so. If I continue walking, I could catch the bus and get back to my car.

Onwards, then. I’ve had a succession of short walks recently, and am keen to cover some more miles today.

The road stretches ahead. Easy walking. I pass a group of little boats pulled up on the grass verge…

Onwards. The road is pretty boring, but the views are great. Is that Goat Fell? The highest mountain on Arran? I think it must be. But I’m not sure.

I can see the road curving round the bay. No sign of the bus. Plenty of time. I’ll catch it when I get to Dougarie, because I’ve already checked on Google Maps and there’s a bus stop just beyond the Dougarie bridge.

I pass a couple of road-construction vehicles. An old notice warns me this road will be closed for a day in August. “Sorry for the inconvenience.” Wow. If they closed this road, it must have been very inconvenient. There aren’t many roads around Arran, and this is one of the few serving this area.

Further along, and I come across a few camper vans parked on the grass beside the shore. One of the joys of Scotland is the relaxed attitude towards overnight parking and to camping outside of official parks.

The sky has darkened and the light is poor. Shame. My photographs along this section of the walk all turn out rather dull.

I reach Dougarie. There is a line of stepping-stones running alongside the bridge. Does anybody use them? When the bridge is only 100 feet away? The building near the shore is called Dougarie Lodge. It is surrounded by “Private” signs, but looks empty.

I march along the road. And, after a while, realise I haven’t come across a bus stop. Oh. Where is it? I’m sure I didn’t miss it.

I walk past an electricity sub station. What is that doing out here? There’s not a house in sight. I check my map. Oh. I think it must be the “Submarine Cable Terminal”. Interesting. I’m not sure where the cable runs. To Ireland?

Onwards. This road goes on and on. Nothing much of interest to look at. Ah, here’s a rock with cormorants standing on it. I stop to take a photo.

I’m worried about the bus now. It should come along at any moment, but I haven’t seen a bus stop for miles. Will it stop to pick me up if I put my hand out? I hope so.

Onwards. On and on. I’m walking quickly and growing tired, with the tarmac hard under my feet.

The road curves away from the sea and begins to climb up a slope. I must be nearly at a place called Imachar. There’s a bus stop there, I remember, clearly shown on Google Maps. Onwards and upwards.

The road up to Imachar is very steep. I puff and pant, and have just reached the top of the climb when I see the bus hurtling towards me. Stick my hand out. Hold my breath.

The driver sees me. Brakes suddenly. And stops.

What a relief. I climb in, sink into a seat, and enjoy the ride back to my car.

The bus is filled with Japanese tourists, who take photographs of the view through the windows. I’m not sure if they capture any decent shots. The afternoon is dim, the windows are dirty, and the bus shakes and trembles its way along the road.

14 Responses to 344 Blackwaterfoot to Imachar