354am Southend to Machrihanish

It’s the last day of April. I catch the early bus from Machrihanish to Southend, a journey that involves one change and lasts nearly an hour.

It’s going to be a long walk today, and I’m feeling rather nervous. The official Kintyre Way website describes this section as “passing through wild and genuinely remote country where there is little shelter and no mobile phone signal”. Oh dear.

Luckily, the bus driver cheers me up with a stream of chat. He has a daughter who wants to go to music school in Cardiff, but he wants her to go to Manchester because it’s nearer – only 7 hours drive away! (A reminder that the Mull of Kintyre is really pretty far from anywhere.)

The first part of my walk leaves the road and loops down to the coast, along a track through a golf course.

A farmer who owns a nearby field apparently doesn’t want golfers retrieving their balls. Miserable git. There’s nothing in the field but grass.

I reach the coast and Dunaverty Rock, where there is a boat house and a slipway. A more friendly sign tells me “Visitors welcome.”

Dunaverty Bay is very pretty and I walk along the sand, enjoying the calmness of the sea and the emptiness of the beach.

At the far end of the beach is a small holiday park, and here I join the coast road again. There’s a weird house on the hill above me. Holiday flats? Looks rather institutional. 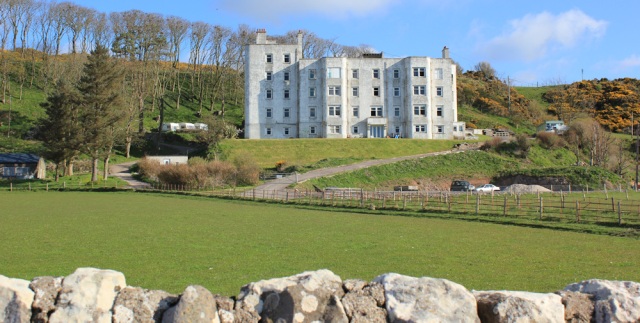 And then a few renovated cottages, and a line of tumbledown buildings. (You see a lot of ruined buildings in the Scottish countryside.)

I walk past a pretty cemetery, with great views of the headland of the Mull of Kintyre beyond.

… although the footprints themselves look very unrealistic, as if molded in concrete. But, on closer inspection, this print does seem to be set in genuine rock.

St Columba also has a cave nearby, but I don’t climb higher up the hill to take a look. My walk today is long enough.

I reach a place called Keil Point, with a car park. This is where the road turns inland. Ahead is another beautiful stretch of beach – Carskey Bay. It’s tempting to continue on along the sand, but I know I will soon come to a river and a dead-end.

So I turn inland along the road. It’s not exactly busy.

Oh dear. I spot a bull in a field. I’ve not come across many cows on my recent walks (I’m very nervous around cattle) and I hope my good luck isn’t about to change. I sidle past the bull, glad of the fence between us – although it does look rather flimsy. 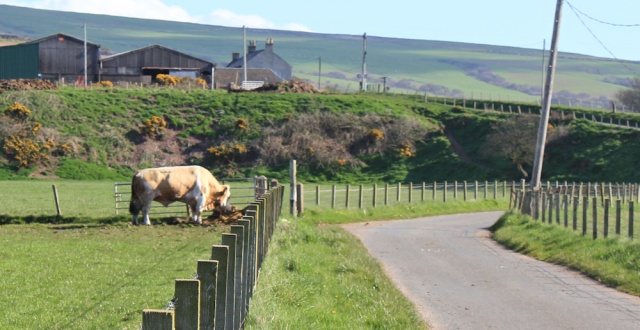 Soon I reach the turn off to the Mull of Kintyre lighthouse. Now I need to make a decision, because there are several ways to tackle the next section.

The trouble with the Mull of Kintyre is that it isn’t a discreet point, or even a single headland. No, it’s a great, wide, lump of trackless ground with numerous separate peaks and troughs, and cut through by multiple streams and burns.

One coastal walker walked to the end of the lighthouse road and then tried to find a way across the Mull and up to Machrihanish following the coast. He warned me the land was really, really difficult underfoot and advised me not to attempt it.

Another coastal walker (Andy) found a track leading up from Carskey, a farm a mile or two down the road. I’ve studied the map, and think I can trace the track he walked along. But I chickened out from following in Andy’s footsteps because I wasn’t completely convinced I would find a way through.

The third option is to stick to the official Kintyre Way, and that is what I’ve decided to do.

So, I ignore the turn off to the lighthouse, and continue up the road. Past a barn where cows are standing safely behind grills, along with some very young calves. They stare at me suspiciously as I trudge past. 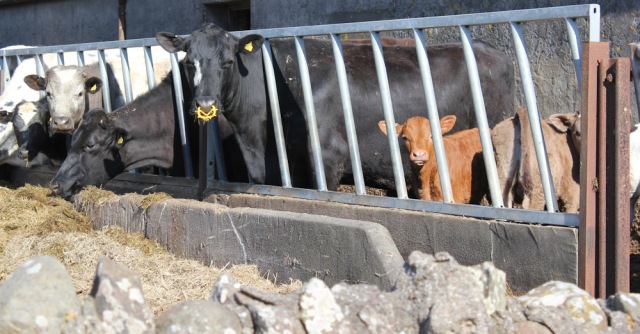 I soon come to a fork in the road and turn left towards… towards Dalsmeran? What? Where’s that?

I study my map. That’s another deceptive thing about Scottish signposts. You might think you were heading towards a village, but Dalsmeran is just a farm.

Onwards. I’m approaching Ormsary (yes, another farm) where there are more cattle in the fields. On my left is a herd of beef cows with young calves – some very young indeed.

I stop to strip off my fleece – I’m getting hot in the sunshine – and watch as a hugely overweight farmer drives up to the cattle on this quadbike. He inspects the newly born calves, talking to them with affection, but never gets off his vehicle. (I would have taken a photo of this enormous man, but it seems rather rude, especially when he gives me a friendly wave.)

Further along, I pass a herd of dairy cattle on my right.

I hope all these cows aren’t a bad omen!

I’m walking up one side of a river valley (called Gleann Breacairigh), and the road climbs gently. To my left, on the other side of the river, I can see Amod Hill, where I know the Kintyre Way doubles back on itself.

To try to avoid doubling back, I spend some time fruitlessly following a promising track, hoping to find a shortcut across the valley. Instead, I manage to end up on the driveway to a private house (or farm), and quickly turn back.

Back on the road again, I study the hill, and see something red making its way up the steep slope. Is that a walker on the Kintyre Way? If so, it will be the first proper hiker I’ve seen all day. The red dot is too far away to know for sure. It’s too small, in fact, to show up on the photograph below.

Next time I look, the red dot has disappeared. That was quick! It’s either a very fit walker, or maybe just another farmer on a quad bike.

I reach the driveway to Amod farm. Here the Kintyre Way turns off the road and heads down the drive to cross over the river via a bridge.

On the other side of the river, the Kintyre way turns off to the left, doubling back to follow the river bank down the valley for a mile or so.

I come across a picnic bench. It’s only 11:30 in the morning, but I’ve been walking since 8:30, and missed breakfast because I had to get up early for the bus. Time for a rest, a drink, and a snack. 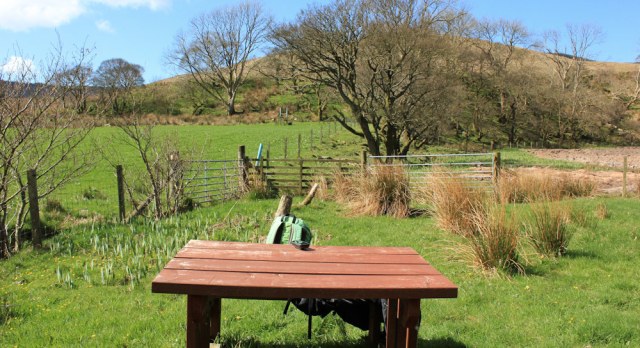 Now the Kintyre Way leaves the river bank, and takes me through a field and up the lower slopes of Amod Hill. A sheep’s skull lurks in the grass… maybe another bad omen?

When I check my Garmin, I realise the Way has been diverted slightly from its original course as shown on my OS map. If I’d continued along my earlier ‘short cut’, I would probably have lost the track completely and been thrown into a panic.

The field is large with few features, and no definite path is visible on the ground. Luckily, a series of signposts mark the course of the Kintyre Way, although it is sometimes hard to spot the next one.

As I get close to the top, the ground flattens out and I come across another picnic bench. Time for another drink and a rest… 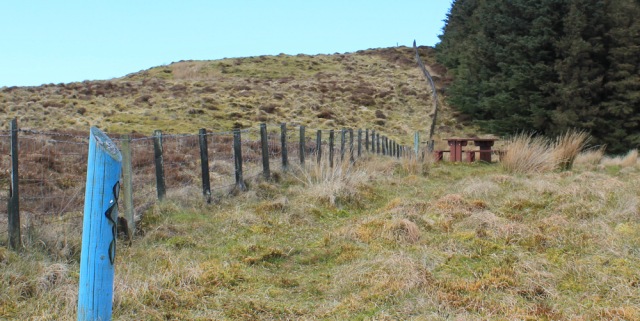 When I set off again, and go over the rise at the top of the hill, I realise this wasn’t the top at all! There’s more climbing to do.

The path isn’t very clear underfoot, but I know all I have to do at this stage is follow, roughly, along the line of the fence. Easy peasy. What was I worrying about?

I look across at the neighbouring hill, which appears to have been scalped by logging activity. There I can see a track slanting down the slope. Is that Andy’s track? I think it might be.

Meanwhile, I continue my slog up this slope. It may not be so relentlessly steep as it once was, but it undulates – sometimes going down and then going up again – and the ground is uneven underfoot, with hidden rabbit holes and boggy pools, so it’s hard to get into a steady walking rhythm.

It’s also hard to know when I’ve reached the “top”. I walk across open moorland and come across a fallen signpost. “Welcome to Largiebaan.” It instructs me to take my litter home (of course) and keep my dog on a lead (I wish I had a dog) and to beware of cliffs. Cliffs? Yes, I’ll stay away from those.

Actually, I’m feeling very relaxed by now. This path is well signposted and has become relatively easy. In fact, to be honest, it’s getting a bit boring. (I’ve never found open moorland particularly exciting.)  And I’ve nearly reached the top of the hill, although it’s hard to tell because the slope is so gentle.

What was I worrying about?

10 Responses to 354am Southend to Machrihanish