365am Crinan to Kilmartin

I catch the bus to Cairnbaan – or as close to Cairnbaan as I can get – and walk the rest of the way along a beautiful lane, shaded by trees and lined by bluebells and buttercups.

I walk past the Cairnbaan Hotel where I’ve been staying. Every night they leave a printed letter on the bed, warning guests to keep the windows closed because of the “wee beasties”. This worked fine, until there was a fire alarm at midnight, and we were all eaten alive in the car park while waiting for the all clear!

I can’t help feeling the midges triggered the fire alarm deliberately. Pay back for keeping the windows closed.

At breakfast, a few days ago, the waitress asked if I’d met Paul Merton, who was staying here overnight while making a program about Scotland. Oh, no. I was really disappointed I hadn’t… until I realised it wasn’t Paul Merton the comedian she was talking about, but Paul Murton the documentary maker.

In fact, I had seen him in the bar, but didn’t realise he was anyone special.

The hotel is in an idyllic spot, overlooking the Crinan Canal. A couple of ships are entering the lock, and I stop to watch their progress, and to snap a few photographs.

The other end of the lock is crossed by a swing bridge. It takes some heavy traffic. I hold my breath as an enormous sheep-carrying lorry manoeuvres onto the bridge.

I’m not following the main road, but sticking to this side of the canal, where there’s a quiet lane which doubles as a cycletrack.

Only a few cars come down here. The speed limit is 10 mph.

Yesterday when I walked along the canal it was evening, and there were hardly any boats to be seen. Today is different. Here’s another lovely ship making its way through the locks. 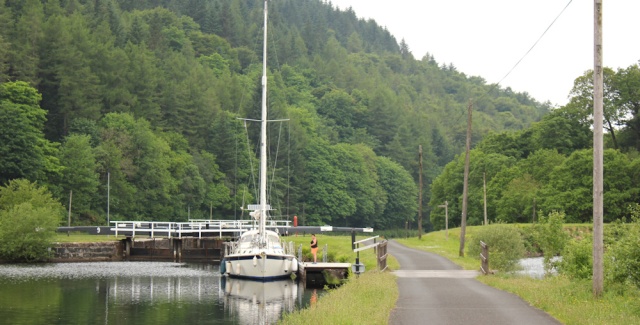 I stop at a wide basin to watch more ships navigating their way up the canal. There are 15 locks in total along this 9 miles of waterway, and each lock takes time to pass through. It’s slow progress, but I guess the effort is worth it, because the Crinan Canal creates a safe short cut between the Firth of Clyde and the Atlantic.

There must be some sort of system for deciding which ship has right of way. Despite the busyness of the canal, I don’t see any arguments or disagreements. Everyone seems very polite and friendly.

The landscape to my right opens out onto a wide, flat plain. A sign tells me I’m walking along the edge of the Moine Mhor National Nature Reserve. It looks pretty featureless and boring to me, but I gather it’s an important area of raised bog, full of peat, which merges into salt marsh at the Loch Crinan end.

Onwards. I’m approaching Bellanoch. A hefty blue boat is tied up at a wharf, more of a working barge, despite the sailing mast, than a pleasure ship.

There’s the bridge I ‘m looking for. It is going to take me away from the canal and northwards across the salt marsh, heading for Kilmartin.

I parked my car near this bridge yesterday and ended my walk here. So, despite having walked nearly three miles already, today’s walk is about to officially begin.

There’s not much to say about this next part of the walk. The road crosses over the marsh, and then through woodland. Only a few cars overtake me, but they are going much too fast. The road is very straight. Very long.

After a couple of miles I come to a crossroads, where I turn left because that should take me closer to the shore.

I can still feel my blister, although it’s much better, and I try not to limp. The sun has gone and the day is dull, but it’s a pleasant walk along this weak road. I stop to take photographs of bluebells among the trees.

Ahead, looking dull in the poor light, is the castle I saw yesterday from across the water. Duntrune Castle. From this angle it looks disappointingly like a large house, and not a romantic ruin after all.

There’s an intermittent roaring noise to my left. Soon I discover the cause of the racket – an orange digger. Some sort of quarry? It looks like a very small-scale operation. A one-man job.

I reach a T junction, where I could turn left towards Crinan Ferry. What’s that? A ferry? I check my map… but the real ferry must be long gone, and Crinan Ferry is now an isolated hamlet along a dead-end road.

So, I turn right, and then first left, ignoring signs that tell me I’m walking along a “Private Road”.

At this point, I’m back near the shore of Loch Crinan and following the curve of the bay. It’s the closest I’m going to get to the sea all day, and I was hoping to walk along the beach… but… oh dear! That’s not sand. That’s mud. Definitely mud.

So my beach turns out to be a messy expanse of gleaming mud. I feel a little cheated, because my OS map definitely indicates sand. Oh well, I better stick to the road.

On the other side of the bay is a white building. Ah, I recognise it. That’s the Crinan Hotel where I stopped for a cold drink yesterday. And, next to it, is the mouth of the Crinan Canal.

I come to a cottage where a track leads off to the right. I know I could carry straight on along the road and reach Duntrune Castle, but the road is a dead-end, the castle appears to be more private house than ruin, and the ‘private’ signs have put me off. So, I turn right along the track.

Today is another one of those frustrating days, where I’m forced to walk tantalising close to the shore, but without sight of the sea. (I’ve studied the map closely and decided the coastal landscape is just too rugged and difficult for me to attempt without the help of a path or a track.)

Now I’m heading in a northward direction, towards Kilmartin. It’s a good track and easy to follow, although I feel increasingly nervous about meeting cattle along the route.

After a mile I come to a little cottage, Kilchoan Lodge, I think. And another orange digger. 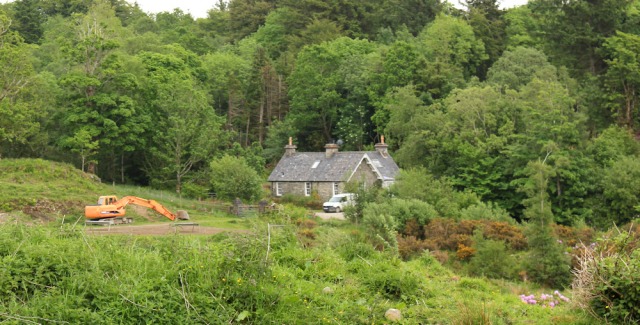 Here the track meets a narrow lane, and I turn left. The lane is soon barred by a gate, and a sign says “PATH ONLY”. I walk through and carry on.

This is a lovely walk, despite the absence of the sea, which is nearly two miles away on the other side of a mass of high ground. More gates to navigate, and occasional half-hidden cottages among the trees.

The gateposts are marked with a sign that seems to suggest I’m hiking along a recognised long distance walking route. But the symbol is unfamiliar, and my map doesn’t help. It’s a mystery.

The road winds down towards a valley. I’m surrounded by a mix of woodland and farmland, and cross over cattle grids.

Round the next bend, and I realise I’m feeling tired and hungry. It’s gone 2pm. Definitely time for lunch. Luckily, here’s a handy bench beside the track.

The view is wonderful. That’s Kilmartin Glen below me, a long valley running south to north, with fields of sheep and – oh, yes, I knew they’d be somewhere – cows too. Beyond I can just see traffic moving along the main road

While I’m sitting eating my lunch on my handy bench, a man comes down a track from some house hidden further up the hill. He apologises for disturbing me, but wants to look inside the “bench” for some post that should have been delivered.

I jump up, feeling a little foolish. My bench is actually his letter box!

Onwards, down the road, and into the valley. Shame about the dull weather, because my photographs of these views should be spectacular.

As I approach a proper road, I come across two Open Reach vans. I see so many of these vans racing around this remote rural landscape, I’ve been intrigued. How many broadband connections are needed out here? What do these vans actually do all day? Now I discover the answer.

One of the vans has its back doors open. Inside is a collection of tools and equipment, and a stove and seats. The kettle is on and the two drivers are having a snack – although I’m not sure if it’s a late lunch or an early tea. A black dog lolls about.

So, that’s what they do all day.

Onwards. I turn left along the road and reach the village of Slockavullin. Here’s a funny house. A shed, really. But built over a stream. I wonder if it gets damp – or even flooded – during the long, wet Scottish winters?

I reach the end of the road. From here I pick up a footpath which runs beside a field and behind a few scattered houses. I’m heading downhill and further into the valley.

12 Responses to 365am Crinan to Kilmartin