I’m back at Carnassarie Castle, where I spent the night in the castle’s deserted car park, sleeping with my new and wonderful best friend – The Beast – a sprightly 16-year-old campervan. I plan an early start and brew myself a cup of morning tea, feeling remarkably perky…

… despite the fact I got very little sleep last night.

I never sleep well in a new place anyway, but decided to sleep with the curtains open, so I could watch the stars. That’s how I discovered it never truly gets dark in Scotland in June. And, instead of watching stars, I spent the night watching battalions of blood-thirsty midges hammer on the window.

This morning is my first morning in the Beast, and I find it takes a surprisingly long time to pack up the van and set off, so my early start becomes not-so-early after all. Then I have difficulty finding somewhere to park near a bus stop, and then the bus is late… so by the time I finally get back to Carnassarie Castle it’s already 10:30am.

I now face a tedious trudge up the A816. It’s a major route to Oban, and the traffic isn’t too heavy, but everything travels at a terrific rate.

I spot a camp below the road… no, those aren’t tents. What are they? Weird. Ah, a sign explains it all… it’s a fish farm.

A track leads down to the fish farm. I check my Garmin, and it looks as if I can walk up to a ridge and pick up another track at the top. Great. I can avoid a section of road walking.

The track turns out to very overgrown, with some strange tanks lying around. Something to do with the fish farm? I sidle around them.

The track peters out at the bottom of someone’s garden, and I take a circuitous route around the house, searching until I find a path leading further up the slope. Good. I climb above the house and stop to take a photograph.

But the slope becomes steeper and steeper, and the path more and more overgrown with ferns and weeds. It’s hard to keep my balance, and my feet keep slipping back downwards. I begin to sweat from the effort of the climb, and every step becomes horribly difficult.

I’m just deciding I should turn back, when I hear a noise behind me. A young man is coming up the slope carrying some drainage pipes on his shoulder. I ask him if there is a track or path at the top of the slope, but he shakes his head. Even the path I’m on isn’t a proper path, he tells me. He’s made it himself carrying pipes up the slope.

Oh no. So this isn’t a proper path after all? I apologise for intruding onto his private land, but he doesn’t seem to mind.

Turns out he’s trying to divert water down to his house. “I would never have thought I would need to worry about water in northwest Scotland,” he says, shaking his head. “I work at a fish farm, and we’re having trouble getting water there too.”

I leave him struggling up the slope with his pipes, while I turn round and slip and slide my way back down the slope. It’s a relief to reach the road again.

I check my OS map, and can’t find any sign of the track I thought I’d seen on my Garmin. What a stupid waste of time and effort that was. And dangerous too. I could easily have got into trouble on that difficult slope.

Oh, well, a lesson learned. There were a few other possible tracks I thought I might try, but now I decide I’ll stick to the road.

Onwards. If only there weren’t any thundering lorries and speeding cars to worry about, because the road is lovely in the lulls between traffic.

After a couple of miles I reach a place called Salachary, where there’s a rather rundown farm-house. Here the road bends round and…

… plunges down a steep slope, with uncompromising barriers on either side and a blind bend at the bottom. Oh dear. There is no verge to step onto. I listen out for lorries, and hurry along this section as quickly as I can.

After this, the route becomes easier. The sun continues to shine, the day is warm, and I feel my spirits lift. Only another couple of miles and I should be able to turn off onto a much quieter side road. In the meantime, I relax and enjoy the views.

Round a corner and there’s Loch Craignish below. Oh! It’s wonderful to be back near the water again. And looks like a nice beach down there.

Beside the next bend in the road I spot a standing stone, and go off the road to have a look at it. There are so many remnants of ancient monuments in Scotland, they don’t bother fencing them or providing signage.

Back on the road, I was hoping to find a way down to the beach, but it looks as if it is all private property and fenced off. A white horse comes running up to take a look at me, and obviously doesn’t like what he sees. Such a disdainful expression! 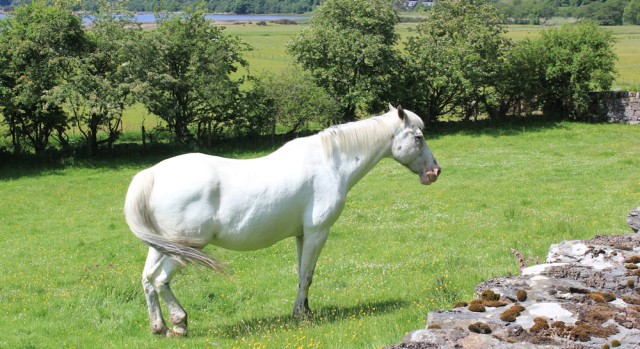 I’ve nearly reached the turnoff I’ve been waiting for. Good. I can get off this main road. There’s plenty of signage to entice me down to Ardfern. I’m promised an inn, a chandlery, a village shop, and a B&B.

On my right, across a wide field, is an impressive large house. Barbreck House. I wonder if it’s a private home – looks deserted to me. Would have great views down Loch Craignish.

Now I’ve reached the turnoff for Ardfern, where a large carved hand – with a somewhat intimidating red finger nail – points me in the right direction. They really want you to visit!

I know the bus I caught this morning was supposed to come down here, but didn’t because of the road works. Instead, the bus company provided a minibus link to Adfern from a place called Craobh Haven.

Anyway, this minor road is a delight. There is barely any traffic – perhaps the road works have put people off – and the road runs along the edge of Loch Craignish, with lovely views over the water.

There’s a roadside mirror opposite the driveway to a property, and I take a sneaky self-portrait. You can see I’m wearing my hi-vis jacket, and my wonderful Australian bush hat.

I decide I must look completely bonkers!

Onwards. Signs warn me that the shellfish in this area might have elevated levels of bacteria, and I mustn’t eat any. What a shame. I wonder why?

It’s linked to the mainland by a causeway, and I can’t resist going over to take a look.

I find boating sheds, a collection of kayaks and inflatables, and a small club house. It’s funded in part by a lottery grant, and looks an idyllic place for messing about on the water. There’s nobody here today.

I take a seat on a bench and tuck into my packed lunch. Luckily the breeze from the loch seems to keep the midges away.

Half way through, I wonder if I should have waited until I reach the pub, where I could have bought myself a decent meal. But I decide I was far too hungry to wait… and there’s no guarantee the pub will be open anyway.

Leaving the island, I haven’t gone far before I spot a “pop-up café” in the village hall. Oh, I could have got something to eat here too.

Beyond this, I reach the section of the road which is being resurfaced. It’s a very hot day. The workmen are standing around, chatting and smoking, and doing what workmen do best… absolutely nothing! (To be fair, it’s probably their lunch break.)

The recently spread tar is still very sticky, and the soles of my shoes are soon coated in a mix of black tar and grey pebbles. I make a crunching sound with each step.

It’s a relief to reach the end of the road works, and to be back on solid tarmac again. Here I discover an art gallery… no, I’ve misread the name… it’s a pub. The Galley of Lorne Inn. And it’s open too.

I stop for a half pint of cider, and then decide I need to replace some lost salt (it’s a hot, sweaty day), so I ask for a packet of salted peanuts, and another half pint to go with them. Then I sit in the shade and enjoy a rest. What’s the hurry?