I get off the bus at the Kilninver bus stop, and try not to think about the walk ahead. There’s going to be a lot of road walking today.

It’s a miracle I managed to get here at all because, when I caught the bus from Oban, I had a ‘senior moment’.

“I’m going to Kil… ah… Not Kilpatrick, not Kilmartin… somewhere else beginning with Kil.”
“Kilmore?” the driver suggested.
“Doesn’t sound quite right…”
“Kilmelford?”
“No. Hang on, it’s in my brain somewhere… ah…”
The bus was crowded, and I felt the hostile stares of a dozen impatient passengers.
“Oh, got it. Kilninver,” I said, eventually.

Nobody else got off here.

I cross over the A816, and start my walk by going down the same quiet lane I walked up yesterday. The sheep are still there, along with their not-so-little lambs. Morning ladies. Morning babies.

To my left is the little river. It looks lovely with the bright sunshine filtering through the trees.

When I get to the fork by the church, I turn right. Now I have a mile to walk along a lovely stretch of coast road, before I hit the A816 again.

There’s a wonderful view looking across fields and towards the mouth of Loch Feochan. I check my Garmin. That’s Ardentallen Point, but what are those tall hills (or mountains) in the distance? Must be the Isle of Mull, I think.

I come to a little cemetery, with a sign saying “Commonwealth War Grave” – note, only one. Can’t resist going for a wander among the stones. It would be nice to be buried here, with this beautiful view.

Onwards, down the road. I’m walking close to the water now. It seems so peaceful, but I can hear the roar of traffic along the A816, which runs almost parallel to my sleepy lane.

All too soon and I’m back on the main road. Oban is only 8 miles away, according to a road sign. That doesn’t sound far, but involves nearly 3 hours of dodging traffic along this verge.

I’ve studied the map, because the road cuts across the apex of another peninsula, and I would love to walk closer to the shore. But I can’t see a route. There are a number of lanes and tracks but… the same old story… they don’t seem to join up.

I come to layby. I never really noticed these places before, but now I’m always mentally checking them out and thinking, “Would this be a good place to camp in the van?” This one looks promising…

…until I realise the caravan that appears to be parked is, in fact, completely wrecked. Smashed windows. The interior trashed. Such a shame.

I would be reluctant to park next to a smashed van. It seems… well, just wrong. And I wonder how it got in such a state. Was it smashed and then left here as a fly tip? Or did someone park it here deliberately, but came back to find it vandalised and then abandoned it?

Onwards. A stone block beside the road appears to be a milestone, but I can’t make any sense of the markings, because there are no place names, just enigmatic initials.

I hate this road. Traffic travels fast. Everybody is in such a hurry, and I must keep jumping into the ditch. I’m walking facing the traffic (obeying the highway code) but it’s terrifying every time a car overtakes its companions and comes roaring up behind me.

Here’s another layby. The sign promises a picnic spot, and I was planning to stop here for an early lunch… but there’s no bench to be seen. It might be somewhere nearby, but hidden in a jungle of weeds.

An unfriendly sign says “No Overnight Parking”. Shame, because it would be a lovely spot to camp, although a little too close to the main road for my liking.

I’m not the only person who thinks this is a little disappointing. Somebody has added a question to the sign. “Why not?”

There are a few houses on the opposite side of the road, so maybe the residents don’t want campervans parked so close to their front doors.

Unable to find the picnic bench, I sit on a stone beside the driveway to one of these houses, and have a quick drink and snack. Wow. It’s hot.

Then I notice a little lane leading off. Oh? I check the map. It’s only a short semicircle and soon ends up back on the A816, but it will give me a little break from the traffic. It’s a very nice lane too.

Apparently there are waterfalls and other beautiful things to see along the forest tracks that branch off from the lane. I’m tempted… but I must get to Oban today, and the waterfalls are nowhere near the coast. Maybe I’ll return and visit another time.

(This is one of the frequent “maybe” promises I make to myself. And, of course, I know it is extremely unlikely that I’ll keep any of them. There is just so much to see, so many deviations I could make… and I have to keep reminding myself that my primary task is to walk the coast.)

I’m back on the A816 and, approaching Kilmore, I take advantage of a break in the traffic to take a photograph.

I’ve really, really, had enough of walking along this road. The cars aren’t too bad, but every time a large lorry goes by I’m almost blown into the hedge. It’s not just unpleasant, but dangerous too. So, I’ve come to a decision. I’m going to get off the road as soon as I can, and the first chance I have is at Kilmore.

From here, I can walk along a series of minor roads to Oban, and maybe even pick up a forest track, if I’m lucky. It means going inland, even further inland than the A816, which is already several miles from the shore at this point. But it’s better than continuing to risk my life.

The minor road through Kilmore turns out to be unexpectedly busy. It’s only single track too, which means I must step off the road for every car that goes by. Maybe I’ve made a mistake?

I come to a junction, and hope things will get better after here. The junction is festooned with signs, including one that says “Dumb Dumpers. Don’t do it. You now face fines of £40,000.”

Shame we need such a sign. I hate to see fly-tipped rubbish.

I turn left at the junction, and soon come across what looks like a fly-tipping site. But, on closer inspection, I think all this rubbish has actually been collected by someone. Old metal frames, mesh wire, broken bikes of various sorts – obviously all could be potentially useful. My hubby would agree. But I think it looks a mess!

Onwards. The traffic has disappeared, and this road is really very pretty. There’s a river running to my right, to my left are meadows full of wild flowers, and the verges are dotted with more flowers.

I reach a lake. Loch Nell. Well, I might be nowhere near the sea, but at least I’m walking beside water, and it’s very beautiful. 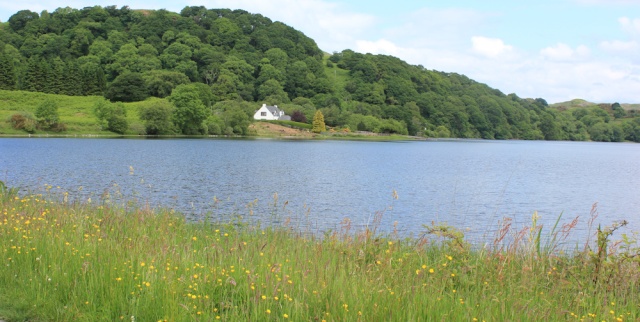 My map shows a chambered cairn just off the road. I think I can see it… climb over a gate… and scatter sheep as I walk up a grassy field. Yes. Here it is. What a wonderful place.

It’s nearly 1pm, and I’m hungry, so I spread out my jacket and sit beside the cairn, using the stones to shelter from the cool breeze blowing off the loch. Time for lunch.

2 Responses to 369am Kilninver to Kilmore