Today I’m walking through the abandoned settlement, of Glendrian, to reach a tiny bay called Port Eigin-aig. Then, because I have no way of getting back to my car otherwise, I’m just going to turn round and walk back again.

Driving slowly along the minor road towards Sanna, I find a parking place at the start of the path. I can’t see far along the track – just to the brow of the hill. So I set off with a mixture of hope and trepidation. Will the path shown on the map actually exist on the ground?

The view from the brow of the slope is wonderful. From this vantage point, I get a better impression of the topography of the place. Formed from volcanic activity, I’m looking across a vast plain, surrounded by a ring of hills. The Ardnamurchan ‘ring of fire’.

I soon come to a deer fence with a gate, and an information board. Glendrian was a  crofters’ settlement in the 19th century. Its depopulation was not the result of the awful Highland Clearances, but simply the result of the dwindling number of resident crofters. The last family left in 1941.

The track leads down towards the plain in the heart of the ‘ring of fire’, and then sweeps around the lower slopes of the hills.

I wade across a ford, shallow enough to avoid the icy water splashing over the top of my boots. But now I wish I’d worn my waterproof socks.

Most of the cottages in Glendrian are in total ruin. Only one remains with intact walls, although with a missing roof. I shelter from the wind behind a wall, and have a quick drink.

I climb up a slope to take more photographs of more ruins, and spend time enjoying the view over the flat plain and the circling hills. It’s all so vast. And so empty.

No wonder the last family left. It must have been a hard life, and they must have felt horribly lonely.

Leaving the ghosts of Glendrian behind, I follow the track as it heads into a range of low hills, and winds between outcrops of rock.

In the middle of nowhere, I’m surprised to come across a partly built fence. “This project has been funded through the European Agricultural Fund for Rural Development” declares a new-looking sign.

Apparently it will protect some new woodlands, which should “improve carbon sequestration through management of soils and through the creation and management of woodland”.

I look around. Woodlands? Not a tree in sight.

I begin ruminating on how Britain has lost most of its woodlands, and how urgently we need to reforest our nation. Really, we can’t lecture other countries about chopping down their trees, when we’ve destroyed so many of our own.

Onwards. I needn’t have worried about finding my way to Port Eigin-aig. This track is really clear.

I wade across another small stream. Still manage to keep my feet dry. Yay! Now, all I have to is follow this valley towards the sea.

But, suddenly, the track forks into multiple different branches, all of which are overgrown in the centre with grass, and none of which are very clear. I follow the one that seems more used than most… until it peters out.

Oh, dear. I check my Garmin. I’m off the path! Should have turned left somewhere a little while back. I retrace my step.

Ah, I was walking along the wrong valley and this is the right one! Glen Drian. It gave its name to the abandoned village of Glendrian

A little stream – Allt Mhic Cailein – runs down one side of the valley. My map shows the path closely follows the stream, so I make my way over the rough ground to walk beside the water.

There is no sign of a path here. It’s not tough walking, but the ground is irregular, with boggy patches and the occasional thorn bush. Requires constant concentration.

The valley (or glen) narrows. Ahead, I spot a track, which appears to have crossed over the stream from the other bank, via a ford.

Oh, I pull out my map again. Yes, stupid me, the path was actually on the other side of the stream. No wonder there was no sign of it on this side!

Onwards, along the track. I come to the end of the glen, and here the track rises and passes around the corner of the slope. I must be nearly there.

I follow the route across a marshy area. And then the track forks. One fork leads westwards towards a place called Fascadale. I’m pleased to see the route looks very clear on the ground, because I’ll be using that track tomorrow.

The other fork heads northwards towards the sea. Ah – there is the ocean. Just beyond that fence.

I walk down a steep slope to the little beach. This is Port Eigin-aig, and it’s where the people of Glendrian came to launch fishing boats and, possibly, set off in boats to trade with other coastal communities.

Nobody here now. What a splendid and lonely place.

I shelter behind a rocky cliff, and perch on a stone to eat my very-early lunch. (I’m hungry because I moved into a bunkhouse last night, and there was, of course, no breakfast provided. By the time I realised I needed to go shopping yesterday, it was too late and everything was closed.)

The wind is blowing cold, and the morning sun has disappeared into a murky haze. My photographs are disappointingly dull. Can barely see the islands across the sea.

I spot a sea otter! Frolicking in one of the inlets. Watch it for five minutes, admiring the way it twists and turns in the water, resisting the tug of the waves. Just like a frond of seaweed. Oh, hang on… I walk a little closer. It is a frond of seaweed.

Feeling foolish, I go back to my sheltered spot and finish my lunch.

My return is uneventful. I walk on the right side of the stream along Glen Drian, but it proves to be even more difficult than the wrong side was this morning. Narrow and very muddy.

Walking across the plain, I stop to take photographs of the oddly pockmarked ground. It’s where the roots of felled pines have been pulled out of the soil. Must have been a mighty big machine, because I can still see tread marks from it’s huge tyres.

The remaining roots have been burnt, forming tangled strands of charcoal within the upended clods.

The sad remains of the forest stretch out as far as I can, for acres and acres. I don’t know why I didn’t notice it on my way out. It’s like walking through a vast cemetery for fallen trees.

I walk back through the ruins of Glendrian, where I’m surprised to see I’m not alone. A young couple are taking photographs of each other in front of the largest house. Further along the track I meet a family group. The children are, very sensibly, wearing wellies.

Back at the carpark, and my car is no longer alone either.

This was a short walk today. I could have walked much farther, but I wanted to save the second half of the walk until tomorrow.

It’s only 1pm, and I have plenty of time to go shopping for food. I know it’s a Sunday, but surely there will be something open in Kilchoan? And I want to visit the lighthouse too. I can’t leave Ardnamurchan without going to the most westerly point on the British Mainland!

Later I read up on the geology of the place.

The circular topography in the heart of the Ardnamurchan Peninsula is sometimes called “the ring of fire”. Because the circle is so vast, it’s difficult to capture in a photograph taken from the ground. You get a better idea of the layout from this aerial photo (taken from Bing Maps). 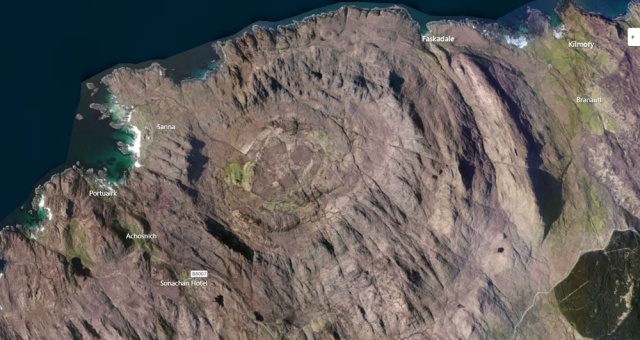 At first, I assumed the flat central plain was the caldera of a giant, extinct volcano, known as a ring dike. Further research (thank you Wikipedia) reveals this particular circular structure is actually the weathered remains of a lopolith.

I confess I found it difficult to understand exactly what a lopolith is, but it’s something to do with volcanic magna extruding into gaps between layers of rocks.

Anyway, here are the Wikipedia links: Lopolith and Ring Dike