I’m back in Scotland, and determined to finish walking around the Ardnamurchan Peninsula. I think some coastal walkers did this section in a couple of days. I seem to have been here for weeks and weeks!

Drive back to the farm at Achateny, and park on the same grass verge as I did before. There’s another car here, belonging to a dog walker.

I walk back up the road, away from the coast. This is the section I should have done last time, but was too exhausted from battling the wind. Luckily, it’s calm today.

A flock of sheep in a nearby field run over to see me, and then follow me along the road. They’re a noisy crowd. Baaing and bleating at me. They must think I have food for them.

The road leads up a wide, flat valley, with a river running somewhere to my left. I can see my old friend, Ben Hiant, in the distance. At 528 metres, he may not be a mountain, but he certainly is an impressive hill.

I reach the road junction where I’ve left my bike, just as I did last time, because from here I can freewheel back down to my car. It’s only a mile, but why walk the same route twice unless you have to?

Reaching my car, I heave the bike into the boot, drive back up the road, and park on the verge near the junction. I seem to have done a lot of toing and froing, and I’ve only walked a mile so far! No wonder I never get anywhere fast!

Now it’s time to turn left, cross the river, and head back down the valley to start the main part of today’s walk. I’m planning to walk to the end of the public road – to a place called Ockle – then I’ll simply turn round, and walk back to my car.

(I’ve decided not to use my bike for this section, because the map suggests it is very hilly and, as yet, my bike hasn’t learnt how to go uphill!)

The road winds slowly up the slope on the other side of the valley, towards a place called Branault.

My last walk in Scotland was through a desolate and intimidating landscape. Today I’m walking through gentle, pastureland. Hello cows.

I pass a field of sheep with their lambs. In England the lambs are now grown to be large, stocky things, but the lambing season seems to start later in Scotland, and these little babies are still tottery and only a few weeks old.

Near the top of the slope, I pass a farm called Branault Croft. I have a feeling this is where the people who farm down at Achateny live.

There’s a standing stone somewhere near the farm, according to my map, but I can’t spot it.

Onwards, up the road, and here’s a sign for Kilmory. Kilmory? I’ve been to a Kilmory before, I think, on Arran. And, didn’t I walk through another Kilmory somewhere down near the Mull of Kintyre?

[Later, I look up ‘Kilmory’ on the web, and discover there are at least four places called Kilmory in Scotland. Always very economical, these Scots. Even with place names.]

Just over the brow of the hill, I spot a red phone box. Love seeing these old things, and I open the door, expecting to find the phone missing. But it is still there. I lift the receiver. Amazing! Yes, there’s a dial tone.

I’m so excited to find a working phone box, I immediately want to phone someone up. The only person I can think of is myself, but I don’t have a mobile phone signal, so that seems a bit pointless.

Onwards. I pass the turnoff to Kilmory. Don’t go down to look at the village, but decide it would be a pretty place to live. 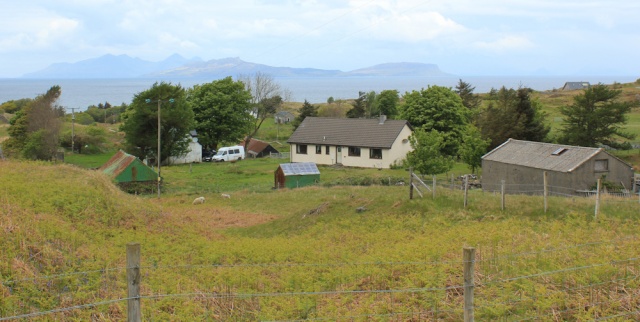 Just beyond the turnoff is an old cemetery. Wonder if it is still used. I sometimes imagine where I would like to be buried when I die. Silly, because when you’re dead it doesn’t really matter anymore, but perhaps one of these remote coastal graveyards would be the perfect resting place.

The road twists and rises. What a wonderful view. I try and work out what I’m looking at. I think the highest mountains in the distance are on Skye. But is the nearer piece of land Eigg, or Rum, or even the mainland?

I wonder if I’m being too timid by sticking to the road. I could climb over the fence and go down the slope, and walk across the fields closer to the sea. But then I pass a sign. “Caution. Farm livestock and young.” Uh, oh. That probably means cows.

Oh, yes. Over the fence I see some cattle-sized feeding troughs. But no sign of any cows. 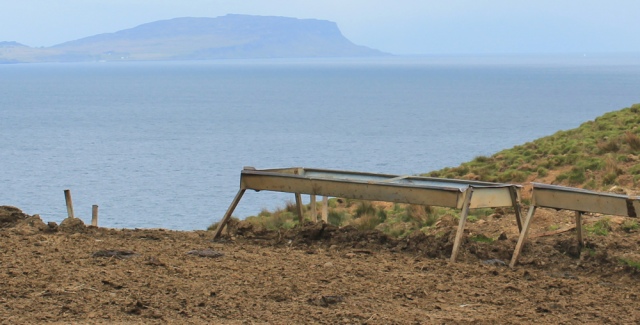 I stick to the road. A little further on, and I spot the cattle down by the cliffs. It’s a herd of that lovely Blue Grey breed, with one big red/brown cow in the middle. Oh… hang on. That big cow isn’t a cow at all. It’s a bull.

Although the road is running some distance from the sea, it’s still a lovely road to walk along. With virtually no traffic, and some gentle twists and turns to make the walk interesting, I get some great views whenever the road rises over the brow of a hill. 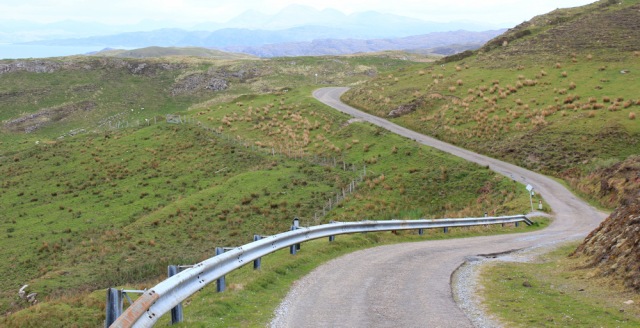 I come to a high point. Nearby, a house is being renovated, but at the top of the hill is a carparking area and an information sign. This is Swordle Bay.

I’m always amazed to learn how busy these remote places once were. I read how this used to be a thriving coastal community, with a number of settlements. Down there, close to the sea, are a couple of prehistoric burial cairns, and the more-recent remains of a 10th-century Viking boat burial site. 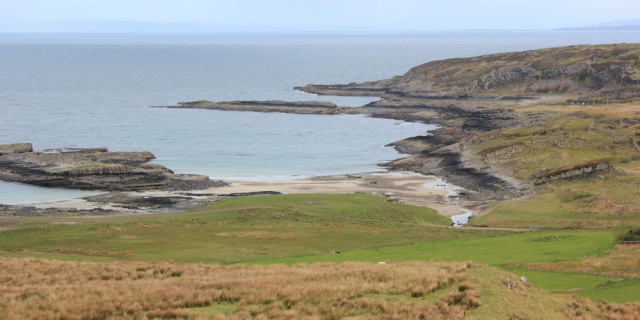 This particular area was forcibly cleared of people during the Highland Clearances. The dispossessed inhabitants went to live in other areas of Ardnamurchan, such as Sanna, or moved to larger towns or cities, such as Glasgow. Some emigrated to America.

Shake my head. The Highland Clearances were a shameful period in Scottish history. Although the 19th century seems a long time ago, it is really just a blink of an eye in the history of such an ancient place. A blink – during which families were divided, communities dissolved, and thousands of years of human habitation came to an end.

I look at the new building going up nearby, and at the other houses scattered across the fields. Well, looks like humans are moving back again.

Onwards along the road. Going downhill now. What’s that scruffy-looking van doing in the field?

The scruffy-looking van turns out to be a decaying horse box. Can’t resist taking photographs of the old thing. Got a real soft-spot for rusty and abandoned vehicles, although I’m more used to photographing derelict tractors rather than horse boxes.

Further along I see an odd sign. Sleddogcentre. I read it as all one word, and assume it’s the name of a house. Rather weird name. And the sign is obviously warning that the property is guarded by a pack of ferocious guard dogs.

I leave Swordle Bay behind. The road twists round a corner, and dips down to cross over a little river. 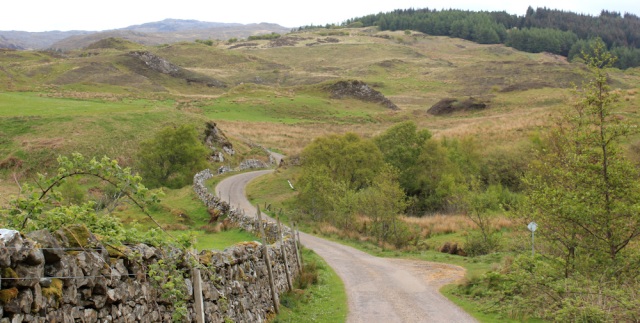 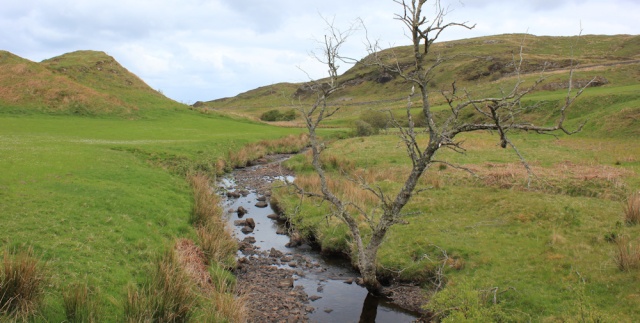 On the other side of the river, the road rises again. I’m glad I didn’t bring my bike along here, because the Monster certainly wouldn’t like all these hills.

I stop to look across the valley. I’m doubling back on myself now and the road along the far slope is the same road I’ve just come down. There are more buildings than I expected in this area. I suspect many of them are holiday homes, but there appears to be a working farm down there – Swordle Farm

The road skirts around a flattish, slightly boggy, area, through which a shallow stream runs. This one doesn’t even merit a name on my map.

The road rises again and the landscape looks wilder now. Less agricultural-looking. The turnoff ahead (marked by a wooden box) leads to a place called Port an Droighionn.

I come to the top of the rise and… oh, I’d almost forgotten this road would come to an end at some point. That must be Ockle ahead.

Coming up the road towards me are a couple of cyclists. Mountain bikers. The man is riding, but the woman, tired from the slope, slips off and starts pushing her bike. I wonder where they’ve been?

I don’t stop them for a conversation, because that would force the poor man off his bike too, and he’s nearly made it to the top!

In a field below is a workman in hi-vis clothing. What is he doing, why does he need such bright overalls, and why is he waving at me? Oh, no, silly me. It’s not a real man. A scarecrow!

The road twists and bobs over another little rise. Here’s the sign for Ockle. Such a great name. 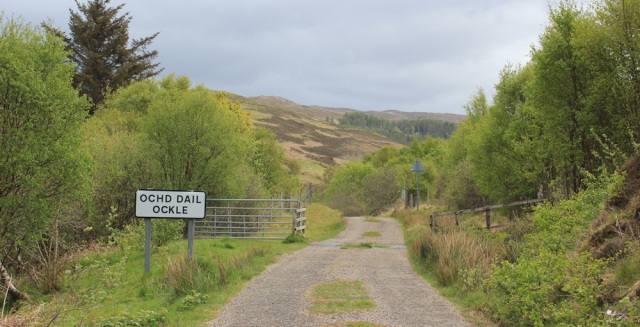 Ockle consists of a number of farm buildings, some looking a little ramshackle, along with a number of nearby holiday cottages. I’m very pleased to see there’s a parking area at the end of the road.

Good. Now I know I have somewhere safe to leave my car tomorrow, because I need to come back here to walk the next stretch of path.

I cross over the bridge. It’s a functional structure, but the river is very pretty, with water tumbling over a series of rocks. 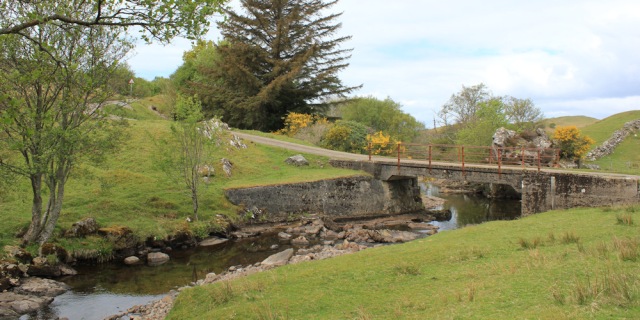 What’s the river called? I check my map. Oh, surprise, surprise. The river that runs through Ockle is called… Allt Ockle!

It’s just gone 1pm. I sit on the grassy bank and eat my picnic lunch. I’m staying in a self-catering place on this trip, and so I’ve stocked up with bread, cheese and ham. Made myself a proper sandwich for lunch this time, instead of the usual snack bars.

I balance my camera on a tree stump and take a self-portrait of my picnic place. 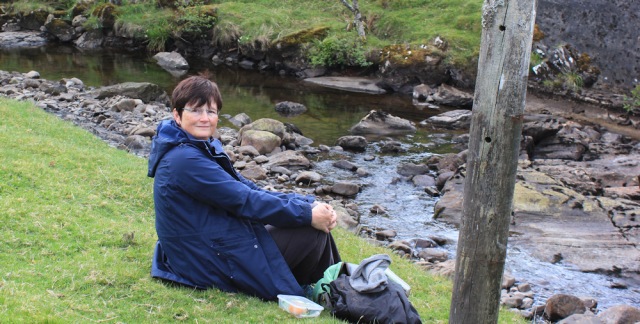 After lunch, I cross over the bridge again, and start walking back along the road. It’s frustrating to have to do the same walk twice, but at least I get a chance to see some of the sights again.

As I get close to Swordle, a group of people pass me. They have several large white dogs on leads, and they turn down the lane that leads to Swordle Bay.

Like huskies? Suddenly the penny drops. Sleddogcentre isn’t a weird name for a house. It’s actually just what it says on the tin. It’s a Sled Dog Centre!