397am Shiel Bridge to Castle Tioram

I have planned a circular walk today. I drive up the narrow road to Doirlinn (or Dorlin – take your pick), leave my car at the end of the road near the castle, march back down the road, and look for the footpath that should take me over the hills and down to Shiel Bridge.

The start of the path is hard to find. I end up in a lumbar yard (not the right way)…

… and then in a muddy clearing at the foot of a small dam (again, not the right way), before discovering the faint imprint of a path along the side of a field.

Is this the way? I negotiate a fence, scramble up a slope, and – yes – there is a definite path running up a narrow valley, alongside a pipe. A definite path. But is it the right path?

With no other obvious route to follow, I decide to follow the pipe. It’s very pretty in the little valley. Silver birches twist around me, and bluebells spread across the slopes.

Up and up, I go, following the path, which follows the pipe, which follows a tinkling stream. In some places the pipe has sprouted holes, sending mini-fountains of water into the air.

Pause for a breath, and look back at this wonderful view. That’s the mouth of Loch Moidart below.

At the top of the valley, I find the source of the stream and the pipe. A shallow concrete dam holds back a reservoir of water.

The dam has created a beautiful lake. It’s very pretty, and even has a lovely tree-covered island.

I check my map. The valley I’ve just climbed up seems to be called Baleach Sgairt Dea-Uisge, a mouthful of a name. (According to Google Translate, this means the “valley of the shrieking good-water” – but I guess something might have got lost in translation!)

The lake itself is nameless on my map. Shame. Such a beautiful place deserves a name. I follow the path as it narrows and teeters along the side of steep slope, looping around the edge of the water. Stop at the far end to take more photographs looking back down across the reservoir.

Above the reservoir, the landscape opens out to reveal a mass of hummocky hills surrounding another lake. This one is shallow and not very attractive. I’m going to turn right here, heading southwards. Later, if all goes according to plan, I’ll return to this same place.

A solitary tree marks the fork in the path. I make a mental note of the tree – because I must remember the way back.

Must remember that tree. But, what if I don’t… what if… Oh dear. It’s an intimidating landscape with a confusing and jumbled topography. There’s not a soul in sight. No clear landmarks. No buildings. Not even a telegraph pole.

No, I must stop being such a coward. I’ve got my OS map, my Garmin, and my personal locator beacon. I’ll remember the tree. I won’t get lost.

The path trails around the edge of the shallow lake, which is called Lochan na Fola. [One possible translation for this, I discover later, is Lake of Blood. Good job I didn’t know this at the time!]

There’s another loch ahead – Loch Blain – and as I get closer to this new lake, I’m surprised to hear the faint sound of women talking. For one brief moment I wonder if I’m hallucinating voices, until I see two little specks coming up over a ridge (to the far left in the photo below).

It’s a couple of women, walking with their dogs. They are deep in conversation, and barely acknowledge me as they come past. I’m not sure whether to be relieved at discovering fellow human beings up here, offended by their lack of interest in my presence, or annoyed at their intrusion into my solitary walk.

Past Loch Blain, the path climbs over a slight ridge, and then the land falls away. Somewhere down there is the River Shiel, and those blue hills in the distance must be on the Ardnamurchan Peninsula. Hello old friend.

I follow the path downwards, soon leave the empty landscape behind, and walk through groves of silver birches…

… until I eventually come to a track, pass through several gates, and then along a route thickly lined with rhododendrons.

Look at those gorgeous blossoms. Really lift my spirits. (I know rhododendrons are foreign plants and a bit of a nuisance because they stifle our native species, but I can’t help loving them!)

The track emerges, eventually, onto the A861, near to a little bridge over Blain Burn. I turn right towards Shiel Bridge. A few hundred feet later, and before I reach the bridge, I come to the turnoff to Doirlinn/Dorlin and the castle.

This point is where I ended my walk yesterday and so here, really, is the beginning of my walk today.

When I drove up this narrow lane earlier, I was nervous about meeting other vehicles in case I had to stop and reverse. Now, walking slowly, and without my car to worry about, I can really appreciate the beauty of the road.

The first section follows the bank of the River Shiel. I remember walking along the opposite bank yesterday. How calm the water looks.

I pass a little black hut. At first I assume it’s a fishing shack, but a little plaque on the wall tells me it’s a “gauging station”. Is it used, somehow, to measure the height of the river?

After a mile or so, the road leaves the river and passes inland on the other side of a hillock called Torr Mor. But, I might be able to stick to the shore because, according to my map, there might be a path close to the water. Now, I’m surprised and relieved to see there’s a definite path to follow – a track, in fact.

A sign beside the gate warns me there is a “killer on the loose”. I immediately think of cattle! But this killer turns out to be a microorganism, called Phytophthora ramorum, and it’s killing off larch trees.

I’m not sure how real the danger is now, because the sign seems quite old. Anyway, it’s a beautiful path, and lovely to be walking close to the water.

Something on the gravel catches my eye. It’s a snake! Oh, no, I think it’s a slow worm, not a snake.

The creature is lying absolutely still, and at first I think it is dead. But, as soon as I swing my camera up, it begins to move, and I soon lose sight of it among the leaf litter under the trees.

[Slow worms are legless lizards, and are perfectly harmless. They often play dead in order to escape predators. If attacked, they can even shed their tails to distract their pursuers, and will later regrow a new tail. Amazing creatures!]

A sign attached to at tree warns me of DANGER. Oh, dear! But, on closer inspection, the danger only applies to fishermen casting their lines near overhead pylons.

I walk under a canopy of trees, larches and birches, and past hedges of glowing rhododendrons.

The river is behind me – I’m not sure exactly where it ended, because its mouth was narrow and hidden in a maze of marshland. Now, I’m walking alongside the open water of Loch Moidart.

I’m surprised to see a car parked on the track, and realise there are houses ahead. Not sure if they’re holiday cottages or for permanent residents. Oh, and there’s the castle ahead too. A bit disappointing, because it seems dull and grim looking.

Across the water is the tidal island of Eilean Shona. I pass a stone slipway, beside which, on a patch of grass,  a line of washing is hanging limply. No breeze to make it flap today.

A nearby building is half-hidden under a sloping, grass covered roof. At first I think it is a cleverly designed eco-building, until I realise it’s just a derelict old barn!

The shore is indented with rocky coves, strewn with golden weed. Over the water, across Loch Moidart, I can see white houses on Eilean Shona. Wonder what it’s like to live over there?

I was a little worried that my route might turn out to be a dead end, and I’m relieved when I realise the track has turned into a definite road.

I pass a pile of logs. I’ve seen neater stacks and give this one a wide berth – it looks a little unstable.

Now a row of bins. Do they belong to the houses I’ve just passed? Seem to be placed in the middle of nowhere, but perhaps this is as far down the road as the bin lorry will come?

I think this stone hut is a bus shelter, but then I realise it’s probably a ferry shelter. “Eilean Shona house and cottages” says the sign. The pallets suggest goods might be left here too – post parcels and shopping, maybe. 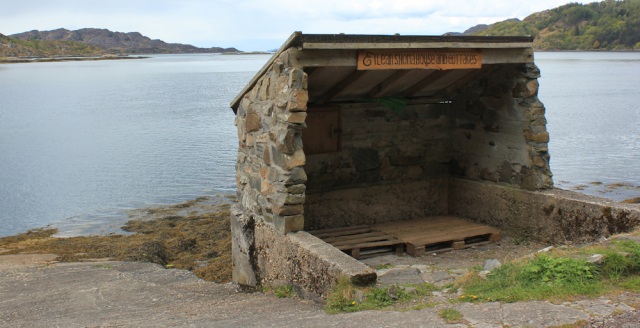 Onwards. I’m getting closer to the castle now. It remains, obstinately, in the shade, making photography difficult.

A short while later, my track rejoins the road, and I reach the point where the public road ends in a car park. This morning, I parked up next to the only other vehicle – a large motorhome with German number plates. Now the car park is positively teeming with cars and vans!

The castle is on a tidal island, linked to the mainland by a sandy causeway. This is what everyone has come to see – Castle Tioram.  Obviously it’s a big tourist attraction, although you can’t really say the place is crowded.

Signs warn that the ruined castle is unstable and you’re not allowed inside. I cross the causeway and climb up onto a rocky outcrop overlooking the castle. It’s gone midday. Time for a rest, and also time for lunch. What a splendid view!

I’m filled with contentment. I’ve negotiated the most difficult part of today’s walk, and remember how privileged I am to visit these amazing places, and to eat picnic lunches in wonderful spots with such fantastic views.

This afternoon I will round off my walk by completing the circuit. It’s only another 3-4 miles, and it will be easy-peasy, won’t it?

You can read about slow worms on the BBC Wales nature site.

11 Responses to 397am Shiel Bridge to Castle Tioram