It’s a thrilling, downhill, free-pedalling ride to Lower Diabaig, where I leave my bike chained near the beginning of a footpath. This is the path that should take me all the way to the famous Craig Bothy.

My whole day has been planned around one golden rule: the horrible Monster Bike can only be ridden downhill. So, I’ve had to make some compromises about how I tackle this section, and I’ve divided today’s walk into three parts. I don’t like doing this, because I prefer to complete my walks in strict geographical order, but today I’m starting with the final part first.

Despite the remoteness of the location, there is a hand sanitiser bottle stuck to a board beside the gate, which I dutifully use. Then I head up the hill, following the path as it threads its way through coarse grass and patches of heather.

I haven’t got far when I feel the urge to check I’ve still got all my vital possessions with me.  Again? OK, yes, I checked when I got on the bike, and again when I got off the bike. But… what if I’ve lost something since then?

This constant checking-urge is verging on obsessional – a bad habit I must break. I think it’s a response to the uncertainties and seismic shifts in my personal life. Not surprising, maybe, because I’ve left my husband of almost 40 years and moved to a completely new city where I have never lived before. It’s coming up to a year’s anniversary of my divorce, and of course my attempts to build a new life for myself have been complicated by lockdown.

So, I try to fight the urge, but decide I won’t enjoy this walk unless I start in the right frame of mind. Reluctantly, I swing my rucksack off my shoulders, and begin the check.

Key to the bike? Yes. Key to the car? Yes. Paper OS map in pouch? Yes. Garmin tucked safely inside? Yes. Garmin turned on? Yes. Phone safe in a waterproof bag? No… but, oh, of course, my phone is in my jacket pocket… no. No, it isn’t!

I empty out the whole rucksack, check through all my pockets in all my various layers of clothing… NO PHONE!

It’s one of those cold, clenching moments when everything turns grey. I can’t survive without my phone. Not only is it my lifeline in cases of emergencies, but I carry my credit cards in my phone case. Without it… well, I’m well and truly stuck. Can’t even buy enough petrol to get me home.

I retrace my steps, scanning the ground anxiously. No sign of it. I make my way back to the beginning of the path, fighting a feeling of panic. Why did I choose a green case, so easily missed among the grass, why not bright orange?

Almost back to the beginning of the walk, and I’ve achieved that strange sense of calm when you know you’re in serious trouble and there is nothing you can do but deal with the consequences.

Suddenly, there it is! Just by the gate. I must have dropped it when I was sanitising my hands.

The feeling of relief is intense. I almost start crying.

Come on, Ruth, that was lucky. Must be more careful. I clutch my precious phone tightly, and make myself a promise to keep checking. It’s a useful habit after all!

Onwards. I climb the path again, and reach the top of the hill. Oh, what a beautiful view. That’s Skye in the distance.

I was feeling anxious about the state of this path after all the rain yesterday, but it’s not too bad. Most of the surface is rocky, with flatter stones often forming a uneven pavement of sorts. Trouble is, you have to keep watching your step, which interferes with looking at the views.

The path keeps, roughly, parallel with the coast, but swings away from the water and runs along the side of a slope, without much of a view inland. The landscape is unstructured – with no trees or other landmarks. I’m surrounded by grass, stones, and the occasional outcrop of rocks.

To be honest, in this featureless landscape, with the sea a blue line in the distance, I’m finding the path a bit boring. At least it’s warm in the sunshine. I slip off my jacket.

Ah, here’s some excitement, a cairn ahead. I make my way up the path towards it.

I stop at the cairn, which is on a slope which might be slightly higher than some of the surrounding landscape, but the cairn certainly isn’t at the top of any hill. Why here? I guess it might be the highest point on the path.

I’d been aware of a couple walking behind, and slowly gaining on me. Now, I’m happy to admit I am a very slow walker, but I don’t like being overtaken. So, I use the cairn as an opportunity to stop for a drink, and to take out my phone. Wait, for the other walkers to come past. 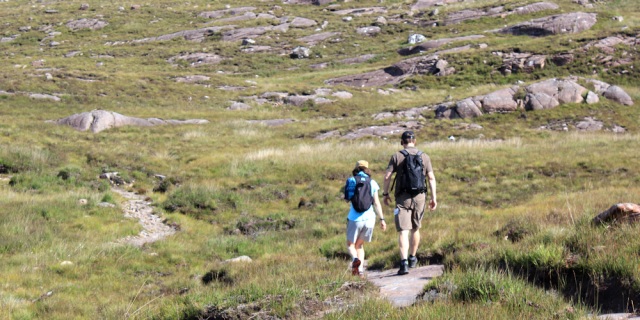 After they’ve gone a safe distance ahead, I set up my camera on the cairn, and snap a self-portrait.

Then onwards, through more of this stony, grassy, landscape.

The path turns upwards beside a burn, where a narrow stream of water runs down towards the sea, in a series of mini-rapids.

At the top of this slope, the view ahead opens up. Beautiful. I love the look of that finger of land ahead. The sunlight – falling in patches – lights up a distant beach.

I check my map. That must be Red Point. A very English-sounding name for such a wild Scottish place.

Soon, I reach another cairn. This one consists of a pile of stones perched on a larger rock. What possesses people to create these structures? I never get the urge to move stones around while out on a walk! But at least the second cairn provides another useful waymark along the route.

Ten to fifteen minutes later, I meet the same couple of walkers who passed me earlier. They’re on their way back, presumably having reached the bothy and turned back.

I follow the path, which continues on through the landscape of grass and rocks. A bright patch of water catches my eye. Pull out the map again. That’s Lochan Dubh – a name I’ve  seen before (it’s not uncommon in Scotland to find several places with the same name!)

The path rolls over up and over a ridge of high ground, and begins to drop down into a river valley. Ah, there’s the bothy near the bottom. Seems a long way down.

The path down to the bothy turns out to be quite tough. Firm stones give way to loose shingle, and any flatter surfaces seem to be inconveniently covered in a slick of slippery mud. I slip and slide downwards, grateful for my pole, and only pause near the bottom to take another photo of Craig’s Bothy.

I can see figures moving about among the trees in front of the bothy. More walkers! Where have they come from? Perhaps from the other direction, from Red Point?

When I get down, I discover it’s a family. A couple with two children. They’re having a picnic among the trees, which I’m sure is a mistake, because I can see midges dancing in the shade. They tell me they’ve come from Red Point, as I suspected, but the path is very overgrown and muddy, with lots of midges among the bushes.

I’ll be walking their route tomorrow, so I’m not very pleased to hear this. I ask where the path to Red Point starts, and they point further down the slope towards the river. There’s a bridge down there.

The entrance to the bothy has a sign asking people to keep the door closed, in order to keep wild animals out. I push it open, and go inside. What a cosy place! It has a nice wood-burning stove, a comfortable chair or two, and a desk with a guest book. Someone has painted an intricate pattern on the wall.

I look at the guest book, which shows a sporadic stream of visitors. And then I go upstairs and am surprised to find it’s fairly clean, and some of the beds even have mattresses.

Back outside, and the family has disappeared. I take more photos of the external view of this rather grand bothy – quite the best bothy I’ve seen so far.

In fact, the building was once a youth hostel, but it’s inaccessibility meant it became little used, and was abandoned, being later taken over as a bothy. It is maintained by a voluntary group.

I walk down into the valley, following the direction given by the family, and find the bridge. The path is very muddy, and the bridge is rather rickety, but passable.

On the bridge, I stop to take photos of the river – Craig River. I was planning to have my lunch here, but there are too many midges.

Climbing back up the slope, I linger for a while outside the bothy. Why are all those orange balloons hanging from the trees? Buoy markers? Weird.

Time to head back. I clamber up out of the valley, finding it much easier to climb up the slippery surface than it was to come down. Then I leave the path to find a nice big rock in an exposed place – with a great view, and enough wind to blow the midges away. Time for lunch.

The walk back seems quicker (it always does, for some reason). I pass the two cairns. And then, about 1/2 mile from the gate, I meet another lone female walker. She is wearing shorts – daring because of the risk of ticks – and turns out to be a local who lives nearby.

She tells me she is planning to walk all the way to Red Point, and will then try to hitch a lift back to Torridon. She’s done this before. Crikey! For a moment, I wonder why I’m not doing the same thing, but then I remember it’s a long way back by road, and what if she fails to get a ride?

My plan is to tackle this section as two there-and-back walks. Much safer. And I’ve nearly finished the first one.

I meet another family, walking towards me along the path, and step aside to give them the obligatory 2 metres of passing space. Two adults and two teenagers. This place is getting quite crowded!

Onwards. There’s the gate ahead.

I wheel The Monster back to the road, and leave it chained up against a fence. I’ll come back later to pick it up, but while it waits, at least the horrible thing gets to enjoy a lovely view over Loch Diabaig.

I had been intending go down to the shore at Lower Diabaig. But it’s now 3pm, and I still have some distance to cover today, and the next few miles are all uphill. So, I decide not to do any unnecessary walking, and head up the road instead.