142(a) Chivenor to Braunton Marsh

What a difference the sunshine makes. I resume my walk at the roundabout outside the Chivenor Barracks. The Tarka Trail continues ahead.

The first mile is pretty monotonous along a track runs between hedges, through fields and, in the distance, more industrial buildings.

I pass a fenced perimeter of Chivenor Airfield. I assume this is all part of the military base. There is a large yellow helicopter sitting on the tarmac. I stop and watch for a while, hoping to see it take off.

There is a buzz of activity, but no sign of the helicopter moving. 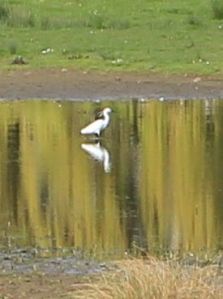 Continuing onwards I pass by some ponds and see this beautiful egret, sitting with its perfect, mirrored reflection. I can’t resist a photograph.
While I am busy with the egret, the yellow helicopter rises over the trees and passes overhead. The noise is horrendous. 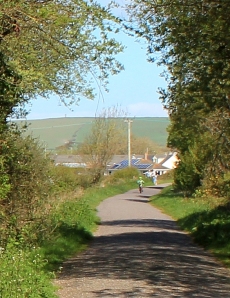 Ahead I see houses. I must be close to Braunton. There is a woman out for a walk with her child, who peddles furiously on a tiny bike, bright helmet on head.

The cycle trail ends, but the Tarka Trail continues, taking a sharp bend to the left and following the road. down the  western bank of the River Caen towards the mouth of the estuary. I am tempted to take the footpath along the eastern bank – it looks enticingly wild and overgrown. But it is, according to my map, a dead-end with no way back over the river. So I resist.

Road walking. Bah. But, once I cross over a little bridge, I find a narrow path running alongside the road, separated from it by a screen of trees and bushes. At last! A proper footpath. This is more like it.

The bridge is called Velator Bridge and the next place I come to is called Velator Quay. I was expecting something a little grander than this. Reeds, mud, and a variety of small boats in various states of disrepair.

Beyond the boats, the countryside opens out – flat and rural. The distant slope of land, with houses just visible, must be Instow or Fremington on the other side of the River Taw.

A single track road runs to my right. An occasional car passes. A group of young boys leap off their cycles to talk to the swans. I wonder where they (the boys) are off to. Fishing?

The River Caen bends to the left, while the road curves off to the right, taking a more direct route to the mouth of the estuary where there is a car park. I continue walking on the raised river bank. A dopey sheep blocks my path, with a couple of lively lambs. I wake her up and wait for them to move before I continue.

This is a lovely section of walk, around an area called Horsey Island. From the raised bank I can look over the river to my left and the marshy grassland to my right. The sky is blue, the light is wonderful, and the grass is a fresh April-green. I take far too many photographs.

I come across some shacks made from corrugated, rusting metal. I jump down off the bank to take more photographs. The ground I am standing on is very muddy and covered by water, I presume, at high tide.

These must be fishermen’s huts. They don’t look very cosy.

The river opens into the estuary and I turn westwards, following the bank around Horsey Island. Ahead I can see a line of grassed dunes running in a spit that seems to be reaching out across the mouth of the estuary.  I pull out my map, but I can’t see a curve in the shore and I am not sure what I’m looking at. I feel a little disoriented.

Anyway, there is nowhere else to go, but onwards. 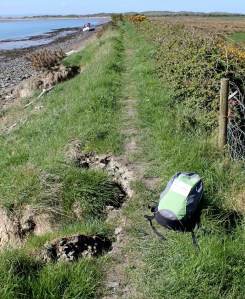 This section of path is less than a mile but stretches out, dead straight, and seems longer. I don’t see any other people.

I have to watch my feet continually. The bank is eroded in places, with gaps and overhanging mini-cliffs. The drop is not great, but would be enough to give you bruises and, if you caught your foot in one of the pot holes, give your ankle a nasty twist.

There is flowering gorse bushes along the path. I sniff eagerly, but can’t smell any coconut today.

With my lens on full zoom, I take a photograph across the river. Beyond the spit of dunes I can see houses. Strange. There is supposed to nothing but water out there, according to my map.

Later, I work out I am looking right across the sand-banks of ‘The Neck’ at the mouth of the estuary. The distant houses are on the other side of the river – Appledore and Westward Ho!

Meanwhile, the white house at the end of the straight section of my walk has been slowly growing larger. Crow Beach House. The only building marked on my map and the only house on Horsey Island. Does someone live there permanently? Or is it a holiday let?

Beyond the house is a nice section of beach, sheltered from the sea breezes by the line of dunes. Somewhere, invisible beyond the bank, is the car park. People are walking and erecting windbreaks, settling down for a day at the seaside. 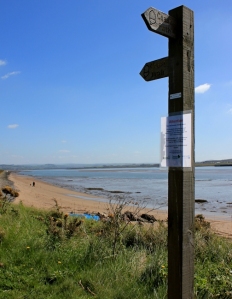 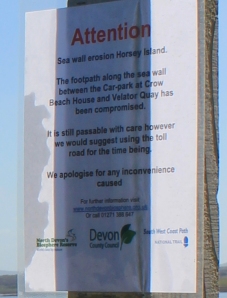 It warns of erosion affecting the sea wall around Horsey Island. As a result, the footpath “has been compromised”, but is still passable. Now they tell me!

I continue my walk along Saunton Sands, in the next blog post.

2 Responses to 142(a) Chivenor to Braunton Marsh