Posted on September 24, 2015 by Ruth Livingstone

I catch the bus to Newport, which looks very attractive this morning, despite the tide being out. As usual I take far too many photographs. Dinas Head is impressive in the distance.

The first part of my walk takes me inland along the estuary to the nearest bridge. I walk past marshland and a great collection of Canadian Geese, who honk and take off in long ungainly lines, only to splash down a few yards further along – and before I have time to get my camera up for a photo. Inconsiderate and noisy beasts! They’re not my favourite type of bird.

The path is popular and I meet several dog walkers.

I cross over the bridge…

… until I spot an unofficial path that ducks down through the bushes, and allows me to continue my walk along the sand. It’s another popular spot for dog walkers.

A spit of vegetated dunes stretches across the mouth of the estuary, forcing the river to wind in a narrow channel towards the far bank. Walking around the sandy spit, I find myself standing at the end of a very long beach. This is Newport Sands.

There is a café and lifeguard post, and a car park. Cars are also allowed to park on the beach. I would like to buy a drink at the café, but it looks closed.

Making my way up the slope at the far side of the beach, I stop to take photographs of the view along the gleaming sand. There is a wonderful feeling of freshness and space.

I haven’t got far along the path when I come across a warning sign, similar to the ones I came across near Angle a few weeks ago. 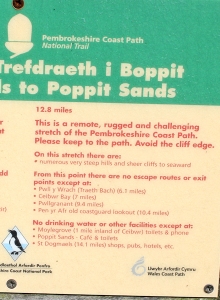 ‘This is a remote, rugged and challenging stretch of the Pembrokeshire Coast Path.’

It’s 13 miles from here to Poppit Sands, with only a few escape routes available if you want to leave the path.

I always find these signs rather intimidating. Despite miles and miles of coastal walking, I still feel like a total amateur. But I’m not doing the full 13 miles today. My plan is to stop at Ceibwr Bay – only 7 miles from here – and walk inland to the village of Moylgrove, where my car is parked.

Tomorrow, I’ll continue on to Poppit and then to St Dogmaels, and finish the day in Cardigan.

Could I walk all the way to Poppit Sands in one day if I really tried? Probably. But I am coming to the end of the wonderful Pembrokeshire Path – which finishes in St Dogmaels, just after Poppit Sands. To be honest, I’m prolonging the adventure, because I really don’t want this section of coast to end! It’s been wonderful.

The path hugs the coast. But it doesn’t actually feel particularly wild or isolated, because the tops of the cliffs are covered in agricultural land with fences, gates, and distant grazing sheep. Idyllic rural countryside – but not a wilderness.

And for the most part the path is flat. To begin with…

… and then it starts plunging up and down.

There are no pubs along this section, so I have brought a drink and some nuts for lunch. While I’m sitting and eating, three young men come walking past. They are the first serious walkers I’ve met today, and are sweating under large rucksacks.  How far it is to Newport Sands? I pull out my Garmin and tell them it’s 4 miles away. But I also warn them there’s nothing much there, except for the café. I hope it’s open.

A little further along, and I come across a solo male walker. He is sitting on the side of the path, bent under an enormous rucksack, stripped to the waist and dripping in sweat. He is swigging, somewhat desperately, from a water bottle.

‘Is there somewhere where I can buy something to eat and drink?’ he asks. I tell him about the café at Newport Sands, which may or may not be open. How far to a café after that? It’s only 2 miles further to Newport Parrog, I tell him, where there is definitely a café. He looks despondent.

Later, I wonder why the other walkers seemed so ill-prepared for this stretch of path? And then I wonder if they have just started walking the Pembrokeshire Coast Path, beginning at St Dogmaels? If so, this would be their first day. It’s easy to underestimate the difficulty of the path and to overestimate your intended mileage, especially when you first start out.

As my walking friend, Conrad, commented recently, “At the start of a long walk the scale of the undertaking is clouded by optimism…”.

Onwards. The path seems clear ahead. I can see the line it cuts through the ferns and gorse…

… but in places it is very overgrown, crowded with hanging vegetation, making it difficult to see whether the ground is safe beneath my boots. I have to tread carefully, not wanting to twist an ankle in a rabbit hole. And the sun hasn’t reached the ground – so I slip and slide on mud.

No wonder the solo male walker looked fed up. This is the most difficult part of the walk so far.

I pass a sign that reminds me the Pembrokeshire Coast Path is also part of the International Appalachian Trail.

Now I’m starting to tire, so I begin looking ahead to work out where my exit route might be. I’m going to leave the path at Ceibwr Bay, and follow a footpath inland to Moylgrove. Where is Ceibwr Bay? Behind one of those headlands?

I come to a river valley, where the path plunges down to nearly sea level. A huge hole indents the opposite side of the valley. That must be the Witches’ Cauldron. It’s not marked as such on my map, but my B&B landlady told me about it.

If I wanted to, I could head inland at this point. A footpath path leads up to the road, from where I could walk along tarmac to get to Moylgrove. But I’ll stick to the coast for now.

On the other side of the valley I stop to peer into the Witches’ Cauldron. Murky green water lies at the bottom. It’s connected to the sea and at high tides you might see some dramatic crashing waves. But at the moment it looks very peaceful. And there is a solitary seal floating just beneath the surface- as if in its own private swimming pool.

I climb up from the Witches’ Cauldron, and really enjoy the next mile of coast walking, knowing I must nearly be at Ceibwr. The sun is behind me, and the cliffs are lit up – showing off the patterns of their folded striations.

On a fence post I spot a bird of prey. It’s feathers are ruffled by the breeze and it seems unperturbed by my presence. Is it a young kestrel?

The path joins a road, and I walk down and into Ceibwr Bay.

There are a few cars parked along the narrow road, and people out enjoying the late afternoon sunshine.

I could walk along the road and up into Moylgrove, but there is a better alternative. A shaded footpath runs alongside the stream and I follow this up the valley. It makes a pleasant change from the exposed cliffs – a cool, green tunnel. A good way to end the day.

11 Responses to 206 Newport to Moylgrove