Posted on September 25, 2015 by Ruth Livingstone

This morning I catch the bus from Cardigan to Moylgrove, and then walk along the narrow road that leads towards the coast.

There is a lovely, relaxed feel to this part of Wales. I pass a driveway with bags of fresh apples for sale (£1 per bag, in an honesty box). The next driveway has cartons of fresh eggs for sale and another honesty box. And another offers free horse manure, but they want the sacks back, please.

One house is sporting a familiar flag – a white cross on a black background. The symbol of pirates and smugglers? No. The Cornish flag. Strange to see it flying in Wales. But the Pembrokeshire coast really does remind me of Cornwall, so perhaps not so strange after all.

While I walk, I ponder a mystery. A group of young men were dropped off by minibus at the bus depot in Cardigan, and caught the same bus to Moylgrove with me this morning.

I wonder what they are planning to do? It seems an odd place to come, because there is nothing in the tiny village – no pub and no cafe, and no bus back until late afternoon. The men looked half asleep (possibly hung over) and seemed ill-equipped for walking because they were wearing ordinary shoes and only had one light rucksack between them. I hung around for a while to see where they might be heading, but they seemed in no hurry to leave the bus stop.

I arrive at Ceibwr Bay. There is a notice pinned to a post warning visitors to stay away from the baby seal pup on the beach and requesting people keep their dogs away too, so as not to scare the young pup or its mother. But, disappointingly, I see no sign of the pup today.

I join the coastal path and walk around the outskirts of the bay, before undertaking the steep climb up the cliffs.

The slope is covered in a shrub with pretty pink flowers which give off a gentle perfume. I recognise the plant. It is Himalayan balsam, an invasive plant that crowds out native species and is regarded as a major nuisance..

At the top of the slope I pass a farm. This dog barks ferociously, but his aggressive stance is a fake front. He is betrayed by his wildly wagging tail.

From here the path winds ahead, along the edge of cliffs, over peaks and down into valleys. It’s a truly beautiful landscape, lit by intermittent bursts of sunshine, and I enjoy this part of the walk tremendously.

Unfortunately, because the cliffs are north facing, they remain stubbornly in the shade and my photographs fail to capture the true splendour of the scenery. (I remember I had the same problem when walking in North Devon.)

The first major headland is Pen yr Afr, from where sheer cliffs fall into the sea.

I make steady progress. Below, coming from areas of exposed and pebbly beach, I hear the distinctive cries of seals. Eerie and haunting.

By midday I reach the headland, and I decide to stop for a snack, sitting on a tuft of soft grass and perched above the high cliffs. On the beach below are a group of seals, camouflaged against the grey rocks. I spend some time watching them through binoculars – they are easier to spot when they are moving about.

I can see strollers on the cliff tops – a sure sign there is a car park somewhere nearby, and a couple come walking along the path. I show them the seals and lend them my binoculars.

Further along and I reach Cemaes Head, where there is a ruined hut and the remains of what might have been a lookout station.

Cemaes Head is the most northerly point of the Pembrokeshire Coast Path. I feel sad, knowing I am nearly coming to the end of this wonderful National Trail.

But around the headland I can see the next bay. This is where the River Teifi enters the sea, and the river forms the boundary line between Pembrokeshire and Ceredigion. Across the bay I can see Cardigan Island, and the coastline of Ceredigion, where I will be walking tomorrow.

Yes, my time on the Pembrokeshire Coast Path might be coming to an end, but there is the Ceredigion Coast Path yet to come, and people have told me it’s beautiful too. Something to look forward to.

Meanwhile, I hear more seal noises. I peer over the edge of the cliffs, gingerly because the steep drop makes my head swim, and take more photos. These seals are easier to spot here, lying conveniently on green-covered rocks.

Out in the bay is a strange rippling circle. Too slow to be a whirlpool. Too persistent to be formed by a speed boat. Perhaps it’s caused by the incoming tide meeting the outflowing river?

Along here, I spot a rabbit seemingly asleep among the short grass. I sneak forward slowly, taking photographs, and expecting it to wake up and shoot off at any moment. But it doesn’t move. I get to within a few feet of the creature, but it stays still and keeps its eyes shut. It looks old and ill. Poor thing.

A few yards further along and a border collie runs up to me, carrying a plastic dumbbell in its mouth. It clearly wants to play. I throw the toy. The collie brings it back. I throw it again. Back it comes. A couple – the collie’s owners – shout to me to ignore the dog. It’s a nuisance.

Actually, I have an ulterior motive for keeping the dog occupied. I don’t want it to spot the sleepy rabbit in the grass.

I walk with the couple – off and on – as we head down towards the mouth of the estuary and Poppit Sands.

They tell me they’ve never been to this particular area before, and decided to give the Pembrokeshire Coast Path a try. But it has been a disappointing experience.

Disappointing? The Pembrokeshire Coast Path? But soon – yes, I see what they mean.

We walk through a tacky yard, strewn with pieces of decaying machinery. From an open garage door, music is blaring from a loud radio. It’s jarring after miles of isolated walking, where the only noise is the sound of waves, the cries of sea gulls, and the spooky howling of seals.

From here on, the path follows a road. It may be a quiet road, but it is boring, with high walls and hedges. I have to climb up the bank to get an occasional view over the estuary below.

As we get lower, there are better views over to the coast on the other side of the estuary. It looks inviting.

And then I am walking down a lane and arrive at Poppit Sands. What a lovely name! And a lovely place. It has a lifeboat station, public toilets, and – most importantly – a café. I order a bowl of Welsh Cawl. It is, in my opinion, the best soup in the world and a meal in itself.

Afterwards I visit the public toilets. They are terrible. The cubicles are so small it is impossible to be inside one and to close the door without taking off your rucksack. Or without climbing onto the toilet itself. Who designed this? Crazy.

From Poppit Sands, the coast path seems to follow the road towards Cardigan. I am just setting off when the couple with the border collie come running over and offer me a lift. The road is narrow and not much fun for walking, they tell me. I thank them for their kindness, but explain I simply must walk. It would be cheating to catch a lift.

Actually, the walk turns out to be better than I anticipated. I follow the dunes to start with, and then walk along the sandy shore. The tide is coming in, filling the estuary with gleaming blue water and swinging the ships around.

Further along, and I have to abandon the shore. Now there is a long stretch road walking, and it’s tough on the feet and rather boring.

I pass a driveway where a man is loading golf clubs into the boot of his car. He is going away for a golfing weekend and we have a brief chat about the wonderful weather. I explain I’m walking the Pembrokeshire Coast Path.

‘Then I must take your photo,’ he says. ‘By the marker.’ And he points across the road. I see a patch of green grass and a floating quay. Marker? That stone?

Yes. It’s the end of the Pembrokeshire Coast Path. (Or the beginning, depending which way you go.) And I would have missed it if my golfing friend hadn’t pointed it out. 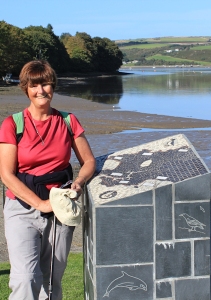 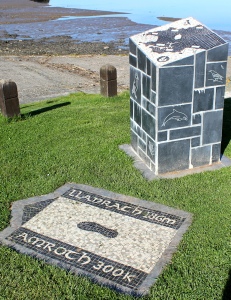 We cross the road and he kindly takes my photograph standing beside the stone. I remove my hat and my glasses. Must look my best at this important waypoint.

Then I take a photo of the stone and the mosaic floor panel. ‘Amroth 300K’

It really doesn’t seem 300k, or 186 miles, since I stood beside the start marker outside the pub in Amroth. That was in mid June. Only 3 months ago. I’ve made such good progress this year.

Later, my Artist in Residence, Tim Baynes, produces this stunning painting of the scene behind the marker.

Nearby stands a statue of a mermaid. I can’t resist a photo of her. She throws me a suspicious look.

Onwards. I need to get back to Cardigan, where I’ve parked my car.

I walk along roads through St Dogmaels, and then the path dives off and I follow a zig-zag route down a slope. The railings are not as solid as they look – some of the supporting soil has been washed away.

I reach the bridge over the river and stop to take a photo of the quay on the other side. I ate in the yellow coloured pub yesterday – The Grosvenor – and plan to eat there again tonight. They start serving food at 6pm and I’m hungry. 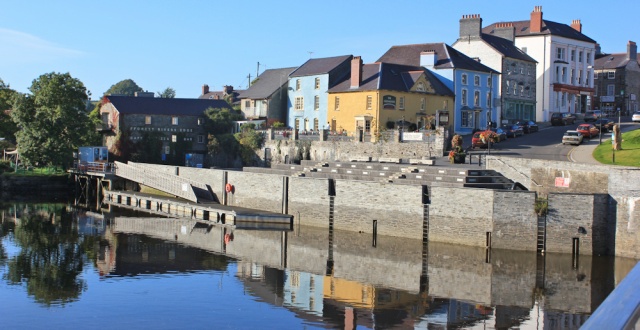 Once Cardigan was a busy and wealthy port, exporting and importing both goods and human cargo, as from here many emigrants left to start new lives in the New World. The value of goods coming in and out was second only to the great ports of London, Bristol and Liverpool. It’s hard to imagine now.

Highlight of the walk: Finishing the magnificent Pembrokeshire Coast Path.

What happened to the young men on my bus? No idea. I never saw them again.

16 Responses to 207 Moylgrove to Cardigan