Shotton isn’t really a town in its own right, more a continuation of Connah’s Quay to the west and Queensferry to the east. So it’s a little hard to tell when you’ve arrived, but I recognise the bus stop from yesterday and manage to get off in the right place.

Next comes a brisk walk through the two stations, down the cycle route, and I’m back at Hawarden Bridge. From under one of the arches I take a photograph looking down the River Dee to the road bridge, Flint Power Station, and the forest of pylons.

I’m back on the Wales Coast Path, although this doesn’t really feel like Wales, and neither does it feel like the coast. But I’ve nearly reached the end… only 6 more miles to go. I can’t believe I’m nearly there.

Forwards, then. I don’t cross the river at this point, but carry on along the bank heading east, along a raised ridge on the edge of the marshy area bordering the river.

I take another photograph of this wonderful building on the opposite side, noticing the windows are shuttered up and the place looks abandoned. Shame.

[Eunice has Googled and discovered the building used to be the offices of the old Hawarden Bridge steelworks. A listed building. Now owned by Tatar steel.]

I turn back to take another photo of Hawarden bridge, which looks much better from this side. It was, originally, a swing bridge. But since there is no longer any shipping along the River Dee, the swing mechanism no longer works.

I feel the banks of the River Dee are littered with the memories of this area’s industrial past. Although I’m pleased the pollution has been cleared and the area is a thriving habitat again, I’m also sorry for all the industry we have lost.

Onwards. My grassy path becomes a muddy track. Old Hall Farm, my map says, which sounds familiar until I realise it’s a very common name for farms all over the UK.

By the side of the track is a tiny, but interesting building. I like the elegance of the structure, but what was it for? Far too small for a house. A pumping station?

The muddy track becomes a grassy track. And there’s a road ahead.

I turn left along a quiet road and reach Queensferry Bridge, where I notice Green Samaritan signs are stuck on poles nearby. (Why are bridges such a magnet for suicides? I would hate to drown.) Anyway, although not a particularly elegant looking thing, the metal work of the bridge is painted a rather gorgeous blue colour.

[Later I learn the Queensferry Bridge is actually called the Jubilee Bridge, although locals call it the Blue Bridge – for obvious reasons. It’s a ‘double leaf rolling bascule bridge‘ according to Wikipedia, which means it could open up like Tower Bridge to let shipping through. Sadly the mechanism is no longer needed and no longer works.]

The Wales Coast Path crossed over the Dee at this point, via the bridge. I stop to take photographs looking the back the way I’ve come: Hawarden Bridge and the road bridge beyond, with the towers of the power station and the pylons.

Ahead of me is another bridge (such a day of bridges, today!). That one carries the A494, a major road. It’s a functional, no-nonsense structure, which makes no pretence at opening for shipping.

As I walk nearer to the bridge, I notice the signs on a gantry above. Chester is where I’m heading, but Manchester? I feel a little thrill. Two of my daughters live in Manchester and I suddenly feel very close to them.

One last photo behind me – of the Blue Bridge, which looks much more attractive from this viewpoint.

Onwards. I face 6 miles of straight-line walking. Everybody who’s done this before me has warned me how boring this section of the walk is. And the river bank does look incredibly featureless. More like a canal than a river. I could be back in the Fens.

I sit on the bench (above) and have a quick snack. And then I do something I never normally do: I pull out my phone. I’m going to need some help to survive the tedium of this walk and I plan to listen to a series of podcasts I’ve downloaded.

With no headphones, I tuck the phone under my rucksack strap, close to my ear.

Onwards. I listen to a TED talk on the financial tragedy in Greece and the meaning of democracy, delivered by the Greek financial minister. Ex-minister. It’s timely because the EU referendum vote is next week. Cyclists pass me.

Next I’m entertained by an amusing sci-fi story, narrated in the second person. Apparently I’ve got a weird rash on my foot and the computer is giving me instructions on how to access the medical services in a space station. It’s an interactive story with various options, all of which are explored, and all end in… (Oh there’s a little boat. Should I wave? No, perhaps not.)

… all options arrive, in one way or another at the same endpoint. Death. It is funnier than it sounds.

Another story. A recently bereaved woman takes a trip on a cruise on some incredibly cold sea on a different planet. Another sci-fi one. It doesn’t end in death. (And I’m overtaken again by a couple towing a child in a trailer.)

I come across some more of the little diddly coast path markers embedded in the tarmac. 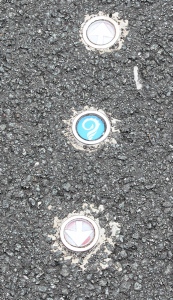 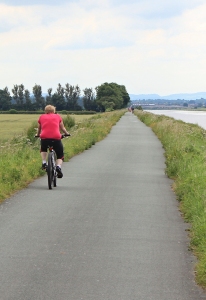 It seems rather weird. I’ve come across plaques in the pavement before, but they were much bigger.

Why so small? And why with little arrows that tell me to go either forwards or backwards – when there is nowhere else to go!

Another cyclist overtakes me. In fact, I meet quite a few cyclists. But no walkers. No walker in their right mind would choose to do this particular walk, not unless it was part of a much bigger trek.

I listen to a man explaining how we could survive on Mars. He makes it sound simple. In fact he predicts we’ll have a Mars colony up and running by 2025. Really?

There are cows on the opposite bank. I give them a wave, but they ignore me. Onwards.

And now for something really interesting – a pumping device. The water only appears intermittently, so I have to wait around to catch it in action.

Onwards again. I listen to a man explain how they discovered a black hole that was actually giving out light, only for a fraction of a second, but it was pretty intense. A black hole giving out light?! Now they’re looking for more. How little we really understand about the universe.

A bevy of cyclists come towards me. Serious boys in Lycra. They shout ‘hello’ as they go by.

They remind me of my hubby, who is a keen cyclist. In fact, this walking trips was delayed, and I had to abandon my plan to climb up Snowdon, because he fell off his bike and knocked himself out the evening I was supposed to leave. (Some people will do anything to get attention! Luckily my husband was such a nuisance in A&E – concussion does odd things to your brain – they were glad to throw him out as soon as they could.)

Onwards. Ah, another bridge. Wonderful. I’ve only got just over a mile to go. Nearly there.

A sign asks me to be more of a tortoise and less of a hare. No problem. Although I’m already the slowest walker I know.

And, to prove it, a couple overtake me. (I hate being overtaken.)

During the next stretch I was planning to listen to an explanation of quantum mechanics (I’ve listened to several and am still not much wiser), but I feel my brain has had enough.

They tell me they’re just setting out to walk the path. And they ask me how I know it’s the end (or beginning). Hmm. Well the line across the path says ‘Welcome to Wales’. But they’re right. It’s not very obvious. Where is the lovely blue and yellow logo?

It’s a little bit of an anti-climax, to be honest. And I had brought a miniature bottle of whisky and a chocolate bar with me to celebrate the occasion. But there isn’t anywhere to sit – no benches, just the rough grass.

I still have a mile to go before I reach Chester. Hey ho. Onwards.

And the entrance to Chester isn’t very impressive either. The path ends beside a rather depressing children’s playground, where a group of teenagers are sniffing aerosol out of plastic bags.

When I finally reach the town centre, I climb up onto the city walls. These are almost fully complete and make a truly lovely walk. Chester really is beautiful.

How did I manage to walk 1,075 miles around the Welsh coastline? It’s only supposed to be 870 miles officially, although the website explains the real distance is currently 882 miles. Well, I get lost a lot, take diversions, do a few circular walks when the transport logistics defeat me, and I also count distances to and from bus stops, train stations and car parks.

48 Responses to 256 Shotton to Chester