Posted on October 2, 2016 by Ruth Livingstone

I’m not sure where Heysham ends and Morecambe begins, but the promenade goes on and on…

… and on and on. It’s a shared walking/cycling track, and I think of my hubby cycling somewhere inland.

I come across a number of metal plaques set into the pavement. ‘The materials that formed the bay were deposited by Lakeland glaciers 10.000 to 25,000 years ago.’ More information on other plaques explains how important this area is from a geological point of view.

Marsh has given way to sand now. This is more like it! The beach is punctuated by a number of artificial groynes projecting out from the shore and creating secondary curves in the sand.

I round a curve and look ahead. That’s definitely Morecambe ahead. And the tall, thin tower is the Polo Tower. It moved here from Blackpool and has had a chequered history. Sadly, I think it’s probably destined for demolition.

I come across a section of pavement laid out with fountains. They’re the sort of fountains that appear and disappear in an erratic pattern. Children are running through the spray. I take a quick photo.

(I’m always nervous of taking photographs of children playing. Times have changed and adults hanging around playgrounds with cameras are viewed – quite understandably – with some suspicion. So the photo above was rather rushed.)

I see a beach café. Excellent. I’m hungry and thirsty. But my pleasure turns into disappointment when I discover the café is closed. Why?! It’s a beautiful sunny day in mid September. What a shame.

Deprived of a cup of tea, I walk onwards.

Then I come across another area with fountains bursting up from the ground. This time it’s an excited dog that’s playing with the water. 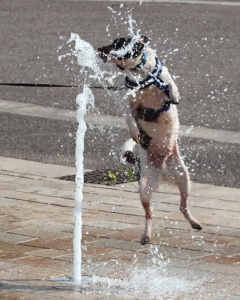 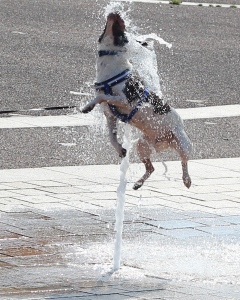 Well, not exactly playing. He seems to be trying to leap onto the top of the fountains, as they come and go.

Or maybe he’s trying to bite them?

He never gives up. Every time he think’s he’s dealt with a fountain (ie it disappears), another one spurts up somewhere else.

Onwards. Morecambe is rather a nice resort. I’m not sure what I was expecting, another Blackpool maybe. It’s not as tacky and much quieter.

When I get closer to the Polo Tower I realise the fun fair next to it is derelict. Seems an odd anomaly in such a nice area.

Morecambe doesn’t have a pier. It has something that looks a bit like a pier, but is actually a stone jetty.

I decide to walk down to the end of the jetty. One of the first things I notice are these wonderful sculptures of cormorants, perched on a couple of large rocks.

And here’s another cormorant, on the wall of a building.

It’s a beautiful day and the jetty is popular.

More cormorants. These are perched at intervals on the railings of the jetty, looking out over Morecambe bay and watching the fishermen parked on the sands.

I can’t resist taking photographs of the bay, either looking out towards the hills of Cumbria, or looking along the sands towards the end of Morecambe and Hest Bank beyond.

When I reach the end of the jetty I see fishermen far out on the gleaming sands. I presume they know when the tide is turning, because the waters in the bay come rushing in at a tremendous pace.

After spending a long time enjoying the jetty, I head back to the promenade and find more artwork. A fence is decorated with sea birds.

Morecambe really is a beautiful place. It looks as if the sea front has been renovated recently and the public art on display is rather wonderful. The view across the sands is pretty impressive too.

Then I see the statue I’ve been looking out for. It’s John Eric Bartholomew, otherwise known as Eric Morecambe. (He was born here and took the name of the town as his stage name.)

Eric and Ernie were my two favourite comedians of all time. I always looked forward to their Christmas shows in my younger days, and went to see them live on stage when I was a student in Southampton. They were even funnier in front of a live audience than they were on TV.

The only thing that is missing from the statue above… is Ernie.

Below the statue, on the promenade, a lone busker is playing on a keyboard. There’s something very mournful about this scenario.

Another striking piece of art catches my eye. It’s a metal structure showing the silhouettes of the fells you can see across the bay, along with their names. Sadly, the atmosphere was too hazy to catch a good juxtaposition of the metal outline against the actual scenery.

It’s growing late. I try to speed up. But there is always something visually interesting to distract me. Here, at the far end of Morecambe, it’s the fishing boats in the afternoon sunlight that catch my eye.

Boats are such wonderful things to photograph, even when they’re sitting on mud. I think it’s a combination of their curving surfaces and the slightly battered paintwork.

There is construction work taking place. They seem to be resurfacing the promenade.

I see our car parked on the street, but no sign of my husband, who must still be out on his bike. So I walk a little further on, and come to a patch of grass at a place called Scalestone Point. In the centre of this patch of green is a remarkable statue.

It’s officially called the Cupid and Venus statue, although the title of the artwork is also ‘Love The Most Beautiful of Absolute Disasters’ and is known to locals as the Mother and Child statue, for obvious reasons.

I love it. It’s beautiful, full of life and energy, with realistic figures and an unusual pose. Unfortunately it’s been the subject of some controversy, as the local council refused to buy it and the artist threatened to destroy it. I can’t find the latest information, so I really hope its future is secure. Because it’s wonderful.

What a great point at which to end the day!

Update on Eric Morecambe’s statue: I believe a new statue, featuring both Eric and Ernie, is due to be unveiled next month.

30 Responses to 273 pm Heysham to Morecambe