Posted on October 8, 2016 by Ruth Livingstone

My husband drops me off at Scalestones Point, at the far end of Morecambe, and I have another chance to enjoy the mother and child statue.

Yesterday I had the privilege of visiting Lancaster Girls Grammar School and talking to some 6th formers about my coastal walking, and about the writing opportunities it’s brought. After the talk, I walked along the canal path from Lancaster to the village of Hest Bank. It wasn’t part of my coastal walk, but an opportunity to do some fun walking just for the sake of it.

Today I’m returning to Hest Bank, but walking via the coastal route this time.

A signpost reminds me I’m back on the Lancashire Coastal Way. (Funnily enough, the official Way heads directly across from Lancaster to Morecambe following the tracks of an old railway line. Personally I think it’s a shame to miss out Sunderland Point.)

The Morecambe promenade has come to an end. I walk down a lane and then hit a beach of rough shingle. The tide is high. I move closer to the water’s edge and stride across marshland, where the going is easier, even though I sometimes have to jump over pools of mud and water.

To my right runs the railway line, hidden among the bushes and trees. The line separates the shore from the main road and residential streets of the coastal strip, giving this section of the coast an unexpected feeling of isolation.

At this point an official right-of-way is marked on my map – leading straight across Morecambe Bay – running from Hest Bank to Kent’s Bank on the otehr side. Does anyone still use this route now? With the tide high it’s almost impossible to imagine people crossing over from here.

I leave Hest Bank behind. Ahead is a caravan holiday park, another car park, and a raised promontory of land.

When I reach the promontory (which has no name on my map) I realise it’s impossible to follow the shore around it, and the Coastal Way passes over the top. I walk through a field of sheep, past a trig point…

… and stop to take photographs of the views. Ahead is Red Bank Farm and another caravan park. Beyond is more marsh, and then the hump of Warton Crag. 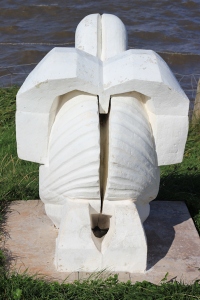 It’s rather fine. Strong and modern-looking. A praying figure emerging from a shell. I read the metal plaque at its base.

I wonder if it is a memorial to a dead man? Perhaps Anthony Padgett (aged 19) drowned in Morecambe Bay?

[No. Later I discover that Anthony Padgett is a sculptor and, according to a newspaper article, he had the idea for the sculpture back in 1994, before it was finally installed in 2013. The dates must refer to the lifespan of the idea of the sculpture. This kneeling figure is now, apparently erroneously, widely regarded as a memorial to the 21 Chinese cockle-pickers who drowned in Morecambe Bay in 2004.]

Onwards. I wonder what this shore looks like when the water recedes? No sign of the muddy cockle beds today.

I follow a raised bank as it skirts around the marsh. Ahead is yet another caravan park. Bay View.

Then I see a walkway which appears to cross the marshy bay, and seems well-worn. So I follow it, but the path soon peters out and I’m faced with a wide stream of water that I can’t jump across. Perhaps you can walk this way at low tide? But now I have to turn back.

I reach the safety of the bank again, only to realise the raised promontory of dry land I’ve been heading towards is a private caravan park. The official Lancashire Coastal Way skirts around it, along the edge of the marsh.

I splosh through wet grass, leaping from one patch of firm land to another. I wish I’d brought my walking poles. Or wellies. Or a boat.

Then I see my husband. He’s saddle-sore after several days of cycling, so he’s parked the car in the village of Warton and come to meet me. But why is he carrying a huge stick and why is he semi-naked? He looks rather wild and primitive, but I have to admit has a fine figure for a man who’s just turned 60.

We continue on our way, sloshing through the bog. After a while, I decide a stick is a good idea, if only to test the depth of the watery puddles before I wade through them. 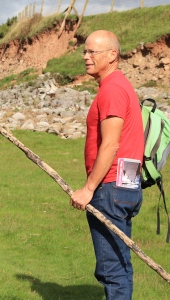 My husband finds me a stick and I pose for photographs. He gallantly carries my rucksack.

I think he is a good example of what NOT to wear when you go on a hiking trip.

Jeans? Very impractical and easily waterlogged. Look at the way he carries my rucksack, casually slung over one shoulder instead of evenly balanced across his upper back. And what about the map tucked precariously into a back pocket? Amateur! At least he’s put his shirt back on.

Onwards. We continue working our way through the marsh, pleased to reach solid ground at last, where we discard our sticks. Now we’re picking our way across a minefield of fallen rocks.

Eventually I can’t bear to see my rucksack misused any longer, so I ask for it back and demonstrate how to carry it properly. THIS is the way to do it.

We’re walking up a shallow river valley. The River Keer is just to our left. The village of Carnforth is somewhere on our right. Ahead is Warton Crag.

The path becomes a proper track and, later, a cycle route. A sign warns about the way we’ve just come. ‘DANGER. Quicksand.’ Too late! Now you tell us?

On the cycle track we meet an elderly man with an elderly dog. He stops us for a chat and tells us he walks this route every day. (Elderly men with elderly dogs are usually very friendly and often have interesting stories to tell, but today we don’t have time to linger.)

We pass over the railway line.

I’m sorry to have missed seeing Carnforth railway station, where the film Brief Encounter was filmed in 1945. But we’re heading for the village of Warton, where my husband has parked his car and where we plan to have a pub lunch.

The pub is closed. This is bizarre, because I phoned yesterday to check they were open and serving food. Maybe I phoned the wrong place? Luckily we find another pub in the village. Standard pub grub, but very edible.

After lunch we face the long drive back to Lincolnshire. Can’t wait to return and continue my trek around Morecambe Bay.

15 Responses to 274 Morecambe to Carnforth