346 am Sannox to Brodick

It’s the beginning of October and the BBC forecast promises two clear days with no rain. Time for one last trip to Arran before the winter sets in…

…only you should never trust the Scottish weather. Overnight, the forecast changes, and on my first morning I’m greeted by 40 mph winds and stormy showers. At least the rainbow looks bright over Brodick.

According to my rules, I should really restart my walk in Lochranza, but I decide it’s too dangerous to tackle Arran’s isolated northwest coast today, and so I jump that section and catch the bus to Sannox instead.

I’m wearing a new, long, absolutely guaranteed-waterproof coat. Even so, I’m reluctant to leave the bus shelter. Somebody has even provided a couple of handy chairs… tempting just to sit here and wait for the next bus back!

The only good thing about strong winds is they create constantly changing skies. A few minutes later, there are patches of blue between the clouds and I can risk getting my camera out.

That dark peak looks ominous. I’m not sure what it’s called, but somewhere close by is Goatfell, the highest mountain on Arran. My walk today will take me along its lower slopes.

I was hoping to climb to the peak of Goatfell before I leave the island… but not today. Not in these winds.

Onwards. I start off walking along the shore. The tide is high and I’m hiking southwards, back to Brodick. The wind is behind my back, but the sun is bright in my eyes and my photographs are disappointingly poor…

… until I turn around. The photograph looking back gives a much better impression of lovely Sannox Bay.

The sand comes to an end, and I must climb up onto the coast road. There is little traffic, and intermittent views of the sea, but I always find road walking rather tedious.

I do, however, spot a seal in the water. No decent photos I’m afraid, because it was too far out. Here’s a photo of a seal-spotting bench instead.

The showers of rain are a constant problem too. My camera goes into my rucksack, out again, in again, out again… ah, here’s a handy shelter. It’s set about 50 feet away from the road, and too far back to be a bus shelter. What is it for? A mystery.

After a couple of miles, I reach the village of Corrie. First come some rather expensive looking houses, with gardens overlooking the sea, and then a row of more traditional cottages.

There’s a little harbour too with a couple of motor boats and – I blink – a Viking ship! It’s a miniature one, but rather a surprise. This part of Scotland certainly seems proud of its Viking heritage.

I walk past a sculptor’s workshop. Can’t resist photographing some of the work in progress. I particularly like the seal’s head, emerging from the wood, bottom left of the photo below.

The road take me past the Corrie Hotel. I presume they are doing good business because I had difficulty finding anywhere to stay for this trip – Arran always seems full! – and I had to resort to booking somewhere on the other side of the island, through Airbnb.

On the way out here on the bus this morning, I noticed a seal sunning itself on a rock just off the shore by the Corrie Hotel. Look, there it is now. How wonderful.

But, on closer inspection, there’s something a bit odd about the seal. It’s keeping very still and striking an unusual pose. Oh, it’s not a real seal after all. Just a wooden carving.

I’m disappointed, but amused too. Was it the work of the local sculptor? I hope so.

The rocks along the next stretch of shore are fabulous. The sun brings out the red colour of the sandstone, which contrasts well with the deep hue of the sea. Full of flowing lines, these rocks look as if they formed just yesterday from the sediments of a muddy river bed. 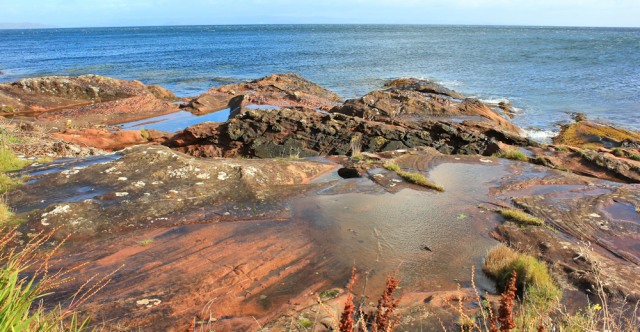 (When I first started walking the coast I knew nothing about geology. I still know very little, but at least I can now identify sedimentary rocks.)

I come across a second harbour, and walk out along the harbour wall. That mountain must be Goatfell. With the sun lighting its slopes, it looks quite inviting. Maybe I will get to climb up there today, after all?

There are sheep on the harbour wall. Sheep? No. Mooring bollards. Painted to look like black-headed sheep. I love them.

Time to leave Corrie behind and continue along the road towards Brodick. This road is also a “Core Path Route”, according to the signposts. I’d forgotten about Scotland’s Core Paths.

I’ve just left Corrie behind, when I come across a forestry track. The website suggested the Arran Coastal Path leaves the coastal road and heads inland at some point. This must be it. Ah, yes, there’s the little round sign with the logo, on the leg of the Forestry Commission’s notice board.

Now I face a familiar dilemma. Do I go up the track, or do I stick to the road? The road is closer to the coast and easy walking. But, the traffic is becoming increasingly busy, and I’m really bored of road walking.

Two men are just coming down the track. They’re the first walkers I’ve met since I set out. ‘Is it very muddy up there?’ I ask them. ‘A little,’ they tell me, but you can navigate through the muddy patches and should be fine if wearing boots.

It starts raining almost as soon as I set off up the track. Despite the rain, this section turns out to be a lovely walk. Up and down, but not too steep. Some mud, but no cow dung. (Yay!) Woods on either side. Little waterfalls. Sadly, very little view of the sea…

…until I get to the top. Here there has been recent logging, so the land opens up and gives me a bright, misty view across Brodick Bay. The rain has stopped, and there’s the ferry steaming in from the mainland. Ahead is the peak of Holy Island.

I stop on a bench and eat my lunch snacks. Unfortunately, in this exposed area, the wind howls around my back, gusting so strongly at times it threatens to push me off the bench.

And then, suddenly, the wind will drop for a few minutes, until the next gust catches me by surprise. Anyway, in a sunny lull between the gales, I manage to take a self-portrait. Note my long, waterproof coat. Very cosy and, yes, it has indeed kept the rain out.

I continue along the track, which begins to descend. Here’s a signpost. Corrie is only 2.5 miles away?! Crikey. I thought I’d walked much further than that. Never mind. Only 3 miles to Brodick. Nearly there.

At the signpost, my track joins a new forestry road. As wide and featureless as a motorway. My heart sinks. These are boring roads to walk along and the sharp gravel is painful underfoot, despite the thick soles of my boots.

But I needn’t have worried. The gravel road soon ends, just above a roaring waterfall. I climb down a little path to try to get a better view of the falls, but only manage to capture part of it.

There’s a bridge across the stream above the waterfall. The bridge looks very new… oh, there’s the remains of the old footbridge, just to the right hand side in the photo below. It’s been washed away.

Thank goodness they’ve replaced it and I don’t have to wade. Not far to go now. Onwards.

18 Responses to 346 am Sannox to Brodick