I’m walking through Merkland Wood. It nestles against the lower southern slopes of Goatfell, and is a popular walking area, although I don’t meet anyone up here. Plenty of signposts…

…and plenty of footpaths. Most of the places mentioned do not appear on my OS map, nor on my Garmin. The Isle of Arran seems to have a whole different system of mapping, which it keeps secret!

As well as footpaths, there’s also a network of marked cycle routes. I think my hubby would enjoy it here, although the mountains might be a challenge compared to the flatness of Lincolnshire.

I planned to climb up to the top of Goatfell today. But I abandoned the idea this morning, when I woke up to rainstorms, 40 mph winds, and saw the tip of the mountain was covered in dark cloud.

Here is the route up to the peak.  I know the top section would be a scramble across exposed rocks, but this stretch of path does look temptingly easy.

Although it’s sheltered down in the woods, I can hear the wind howling through the top branches of the trees. So, I decide to resist temptation. Getting blown off the mountain would be a sad end to my trip!

With my sense of adventure thwarted, I see a signpost to a cemetery. I’m intrigued, and decide to make a diversion.

It’s not far, and I soon come to a walled burial ground surrounded by iron railings. Isolated and spooky. Would make a great location for a horror movie!

Why put a graveyard in the middle of the woods? I presume it belongs to Brodick Castle, which is hidden somewhere below me. In fact, there are only three gravestones in the enclosed space. Two large ones belong to Dukes, and a third, smaller one, to a Duke’s wife.

From the entrance to the burial ground, you can’t see the wife’s grave. Her stone is small and situated below her husband’s and makes me reflect on how poorly women were viewed in the past. Even in death, women were given lower status then men.

I head back along the path to resume my walk. Love the warm glow of autumn leaves, although the colours are nowhere near as vivid as they were last year.

A weather-beaten information board tells me about the Goatfell range. I haven’t seen any deer today, just one very large bird gliding through the trees. Don’t know what it was.

My path crosses over a tarmac roadway. It’s a non-public entrance to the castle, still invisible among the trees.

Around here, I meet a couple of groups of walkers – a family, and a trio of older hikers. They’re the first people I’ve met since the two men at the beginning of the track. Shame, then, that at this moment it decides to pour with rain again.

Luckily the rain soon passes. The path ends in a courtyard, where there’s a motley collection of craft workshops, and a pink-painted brewery which is also a pub. The brewery/pub is tempting… but I resist.

Now I’m back on the coast road. I don’t see any coastal way signs, and there is no footpath marked on my map, so I turn right and follow the road towards Brodick.

[Later, I discover I probably should have crossed straight over and picked up a footpath somewhere on the other side of the road. It would have taken me down to the shore.]

I’ve not got very far, when I spot another inviting craft complex. This is Arran Aromatics, and attached is a pottery and a café too.

I enjoy a hot meal and a pot of tea, while watching the potter at work. Actually, she’s tidying up, rather than throwing pots, but it’s a nice to sit here doing nothing while someone else is working. (Retirement is sheer joy!)

Onwards, following the road. At least there’s a pavement here.

The views to my right are impressive. Yes, that’s Goatfell. I notice the tip of the peak is now covered with cloud, and so I feel vindicated in my earlier decision not to try to climb the mountain.

A lane leads off to the left, through a golf course. Oh good. It should take me down towards the shore.

‘DANGER’ says the sign ‘TAKE CARE’. Yes, I will. At least it doesn’t tell me to watch out for flying golf balls – an impractical instruction, as by the time you see a flying golf ball, it’s probably too late!

Anyway, nobody is playing golf itoday.

I turn off the path, probably too early, following footpath signs. If I’d continued straight, I would have reached the shore. Instead I cross over Glenshurig Burn via a little bridge…

…and wonder why there’s a second footbridge further downriver. Is that where the coastal path runs? Ah well. Nearly at Brodick now.

On the other side of the water, an enterprising householder is selling duck food at 50p a bag, with an honesty box.

Further along, I discover a woodchopper with a sense of humour.

Now I’m back on the road again, feeling somewhat frustrated because I’m not walking closer to the shore.

Along this road, I meet a couple of tourists who ask me if there is a pub back the way I’ve come. They’re supposed to be meeting friends there. It’s a pink building, apparently. ‘No’ I say confidently.

They turn back and, sometime later, I feel guilty because I realise they probably meant the pink brewery/pub in the craft area.

I reach the outskirts of Brodick, walking through intermittent bursts of rain, and head down to the shore, where a couple are throwing a ball for a dog. 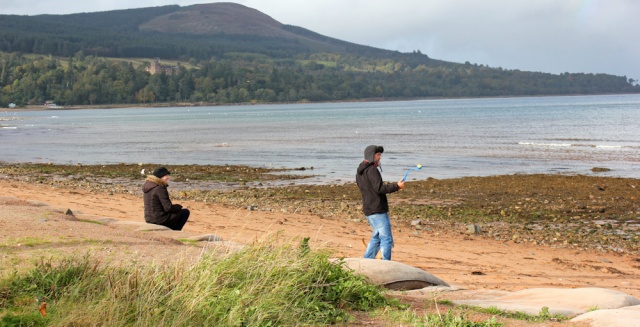 It’s a surprisingly pleasant beach. But, just look at those dark clouds over Goatfell. They’re coming this way.

I turn my back on the storm, and look towards the ferry port, where a ferry has just arrived. I feel a tug of sadness. Only one more day to go, and I’ll have finished the Arran Coastal Way. Shame. I love it here, and don’t want to leave.

Onwards to Brodick. A splatter of drops on my neck, and I turn to look back. The rainstorm is approaching rapidly, blown on the strong winds gusting from the north west.

I walk, through the rain, along a nice foreshore area, where a green strip of land acts as a wide promenade, and there are plenty of parking spaces. The rain soon passes, and the day ends as it began, with a glorious rainbow above Brodick.

Tomorrow, assuming the winds have died down, I’m going to walk the section of the Arran Coastal Way around the north of the island, linking Lochranza with Sannox. Then, my circuit of Arran will be complete.

19 Responses to 346 pm Sannox to Brodick