I leave The Beast in the free car park at the Kyle of Lochalsh. The morning is cloudy but dry, and the air is still. I take photographs looking towards the Skye Bridge.

A boat has docked at a nearby quay, and I watch a family group disembarking. I wonder what adventures they’ve been having?

Today, is a rest day. Of sorts. Actually, I’m heading over the bridge for a quick visit to Skye. It’s the second largest island off the coast of Britain, and I’ve spent so many days walking with this famous island dominating the landscape, it seems a shame not to visit the place.

And I love crossing bridges.

I leave the car park, walking past a little white shed, which proudly proclaims itself to by the ‘Kyle Veterinary Clinic’. Really?

Well, I’ve seen much worse looking NHS clinics… including this awful one in Sittingbourne.

I was worried about walking along the approach road to the bridge, but discover there is an excellent cycle route running parallel to the main road.

On the way, I pass a sign for “The Plock, Kyle’s community parkland”. I’d seen this patch of green space on the map, but wasn’t sure how accessible it was. “Parkland” sounds promising. I decide to turn off the road and have a walk around.

The nearby visitor centre is closed, as is the barrier, and the car park is empty. It’s not the most promising of starts. No views, overgrown paths, and some untidy bushes.

I wander down a path and discover a rough meadow, where a bench is hidden among the weeds and grasses. This bench has a message. “Listen out for the turnstone, the oyster catcher and the wood warbler.”

Further along, and another bench gives a clue to the parkland’s origin. “Hole in one! You are close to the ninth and final hole of the old golf course.”

Yes, that explains this strange place. It does look exactly like an abandoned golf course.

I follow a path through a screen of bushes, fighting my way past brambles and thistles, keen to find the shore. Ah, here it is. And what a great view of the first section of the bridge over to Skye.

Turning slightly, I take a series of photographs across the water. Love those high mountains over there. Blue and mysterious.

I assume the mountains are on Skye. Pull out my OS map, but I’m right on the edge of the map and can’t identify them.

It’s not possible to follow the shoreline – too many rocky outcrops and too much thick vegetation. I fight my way back to the overgrown golf course, and take another path back towards the water.

Find another beautiful view point. That low-lying island is called Eilean A Mhal, I think.

Look across a quiet bay (unnamed on my map) to the far shore, where white buildings cluster. I really love these clear, still days, when the water acts as a mirror, and I spend time taking another series of photographs.

I follow a rough path which winds through more vegetation close to the shore, and meet a couple. They’re the first walkers I’ve met in days and I would love to stop for a chat, but they seem in a hurry.

Walk through a copse of silver birches, and discover a hidden cove where fishing boats are waiting for the tide to rise. Nobody about.

It’s funny how Scotland seems so full – loads of camper vans on the roads, and it’s impossible to find a B&B with vacancies, for example – but yet the place is so empty of people. I’m really amazed at how few hikers I’ve met, considering it’s the middle of the Scottish summer. Perhaps they all head for the mountains? Or over to Skye?

I follow a proper path – hard surface and signposted – towards what promises to be a ‘Viewpoint”.

The path joins a narrow road, and winds slowly up a hill, until I reach another empty car park.  Another path takes me up the last section of the climb.

This high point once housed a WWII gun battery. Now, yes, it has become a marvellous viewpoint. Shame the mountains in the distance are lost in the mist, but what a wonderful view over the bridge to Skye.

The bridge creates a continuous road link between Skye and the mainland, and was opened in 1995. Before that, the only way over to Skye was by ferry. The bridge was controversial, bringing a new influx of tourists to Skye and, some would say, ruining the quiet remoteness of the island.

(In fact, I have learnt that Skye is often ‘full’, with the tourist office desperately ringing around to try to find beds for people who have arrived without booking accommodation in advance.)

After taking a self-portrait, I climb down the hill. I’m very glad I visited The Plock, but I’ve spent a long time here, and it’s definitely time to rejoin the road and head over to Skye.

First, I must stop and take a photo of this lovely fungal growth. As pretty as a rose – in my opinion.

Back on the cycle path, I’m overtaken by an elderly gentleman on a bike. He stops.

At first, I think he is objecting because I’ve caught him on camera, but he simply wants to point out I’ll get a much better photograph of the bridge from further up the road. 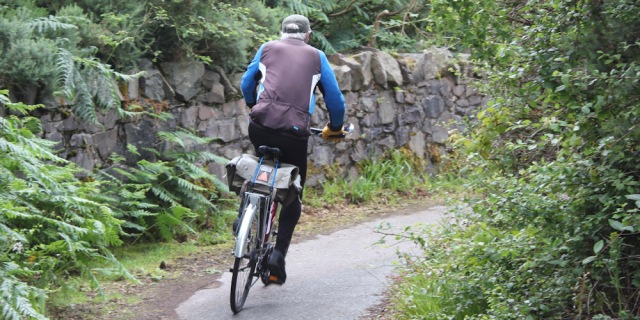 We have a long chat. He tells me about cycling treks he’s done, and I tell him about my own mammoth walk around the coast. He comments on the way I travel light, with only a tiny rucksack and seems very approving of my adventure.

He’s right, of course. There are much better photo opportunities as I get closer to the bridge.

When it was first opened, the Skye Bridge was a toll bridge, and charged the highest rate per meter of any bridge in Europe. Many locals refused to pay, and risked fines and even imprisonment, before the toll was abolished in 2004.

The bridge is in two parts. The first part is long and straight, the second rises in a dramatic arch.

The end of the first part sits on an island, called Eileen Ban. This is where the writer and naturalist, Gavin Maxwell, came to live after his previous home at Sandaig was destroyed by fire. The white cottage now houses the Gavin Maxell museum.

You have to imagine the cottage before the bridge was built above it. This place would have seemed pretty remote and inaccessible, although not as remote as Sandaig.

I’m walking over the high arch of the bridge now. A withered bunch of flowers is tied to the barrier, a sad reminder that bridges are magnets for despondent people.

I stop midway across and take a photograph looking southwards along the channel of water known as Kyle Akin. To the left is the mainland and the town of Kyle. (I can almost see The Beast waiting close by to the white hotel.) Straight ahead is the mouth of Loch Alsh, with the hills of Glenelg on the right.

What a beautiful place. Such a sense of space and wildness. Just wish the sun was shining, but you can’t have everything!

I continue over the bridge. There’s the shore of Skye, just below me. The village I can see is called Kyleakin (same name as the channel) and it’s my destination today. Looks lovely.

There is something odd about the view. What’s that ship doing? It’s listing at an odd angle. Is it beached or wrecked?

Onwards, across the final stretch of the bridge. A car comes to a stop, parking illegally by the side of the road, and a woman climbs out and runs across the bridge. What’s going on?

Oh, she’s just stopping to take a photograph. Wonder if she’s included the industrial wharf in the foreground?

At the end of the bridge is a roundabout. I turn left and head down the hill towards Kyleakin.

Just before I reach the village, I pass a coastguard vehicle. It’s stopped with blue lights still flashing, and nobody inside.

Nearby is the listing boat. I can just see its mast lying at an angle under the bridge. Yes, it must be beached on the shore and the coastguard must be investigating the incident.

I walk into Kyleakin, past an open green space that borders the water.

Stop to look at this quirky arrangement. A bench flanked by two large wooden faces, one with a lifeboat collection box perched on top of its skull.

I like Kyleakin. It has a touristy feel to it, but seems a gentle place with a sense of humour. Saucy Mary’s looks inviting. It doubles as a café and a hostel.

I reach the end of the road, and take photographs of a pier and the ruins of a castle. “Caisteal Maol, remains of” says my map.

It’s 3:30pm and I’m feeling hungry. But it’s the wrong time of day for a proper meal, so I buy an ice cream and a drink from the Castle Moel restaurant-cum-village-shop. Sit outside and enjoy the faint rays of the watery sunshine oozing through the clouds.

It may be mid-July, but the air is cold, and I soon begin to feel chilly. Well, I’ve been over the bridge to Skye. Now it’s time to head back to The Beast.

On the way back along the road, I discover the coastguard vehicle has been joined by a couple of mates. I guess they need to wait for the next high tide to try to refloat that boat.

Back along the bridge. I walk on the northern side to get a different view, and so I don’t see the beached boat again.

Look at the weather over there! Rain falling in sheets over the mountains. I was lucky to enjoy a little sunshine over here.

There’s another walker on the bridge. He’s on the other side, and is taking photographs of Kyleakin. 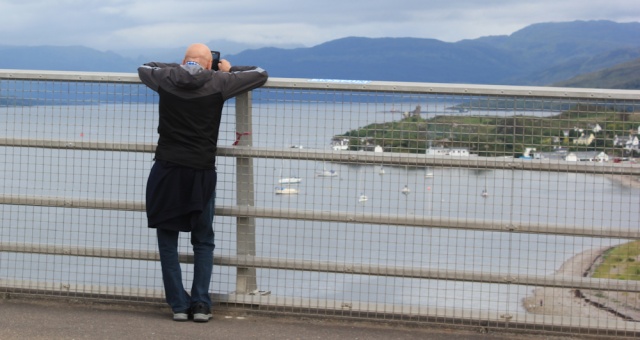 Onwards. The sky ahead looks even more ominous, but the air is still, and the clouds seem to be stuck over the mountains.

Over on this side of the bridge, I can’t see Gavin Maxwell’s cottage, but I do get a great view of the lighthouse… 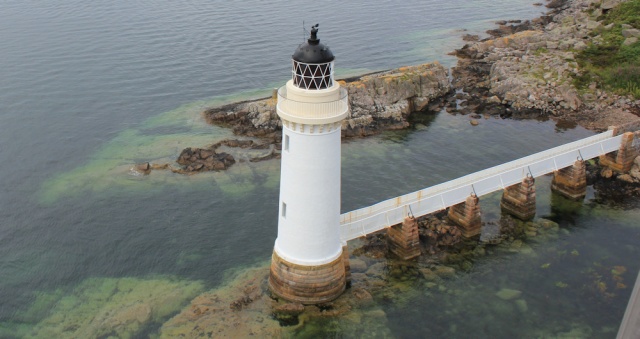 … and a nearby trig point, perched on a rocky finger. Look at the wonderfully clear water surrounding the rock! If only the temperature was milder, it looks perfect for swimming.

A cyclist is coming towards me on the other side of the road. He wobbles over on his bike, and I realise it’s the same gentleman I met earlier. He tells me he’s been looking for me, and hands me a book.

“It’s about cycling, but I thought you would enjoy it.”

Then he’s off, over the bridge again.

The book is ‘One Man and His Bike’ by Mike Carter. I’ve read it before, but left the book behind when I left my home in Lincolnshire and moved to Manchester. 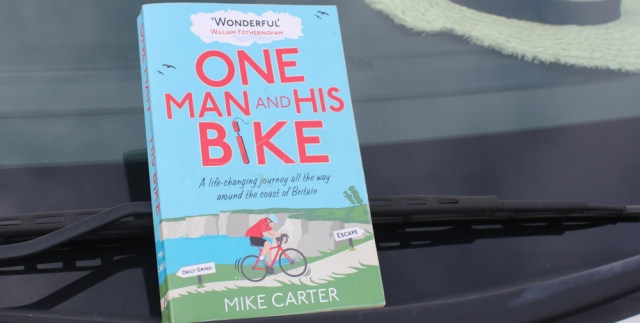 Just the thing to keep me busy on a rainy day, and what a kind gift. I’m very touched and nearly tearful. How nice people are!