I stayed last night in the Wee Camp Site in Lochcarron. This morning, I steer my Scooty bike along the narrow road that runs beside the shore from Lochcarron to Ardaneaskan, and reach the carpark at the end.

It’s a beautiful spot, and I take some time out to sit on a bench and look out over the mouth of Loch Carron. There’s Plockton across the water, and the mountains of Skye in the distance.

On the way here, I passed a little blue fiat parked by the side of the road. Now, the same car pulls up in the car park, and I start chatting to the occupants.

They’re farmers from the south of England, and he is up here looking at a patch of woodland for sale. He told me how he met a local woodsman, and they discussed what trees they could grow, and how they might plant one particular tree at regular intervals to encourage the population of red squirrels.

It’s great to listen to their plans. So much of our countryside is stripped of trees, I love to hear that people are encouraging the growth of native woodland, and supporting the wildlife that lives in it.

I check Scooty is firmly locked, and hidden down the side of a nearby building. Time to set off on my short walk back to Lochcarron. Only 7 miles along this pretty coastal road.

It’s a dull day, but very calm. I pass a scattering of houses, and watch a family playing beside the stony shore. A man is standing in the water. Fishing?

It starts spitting with rain, and I spend the next couple of miles hiding my camera in a plastic bag, and then pulling it out to take a few photos in between the showers. 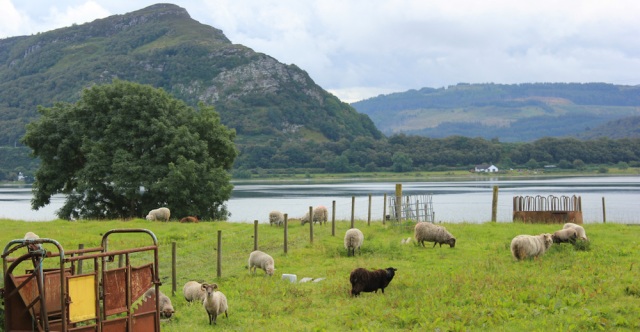 The road rises, and I lose sight of the water behind a screen of trees.

Over a cattle grid, and I pass the spot where I saw the English farmer earlier.

Actually, I thought he had stopped the car for a quick wee,  because he was standing with his back to the road. I didn’t realise they were standing there to inspect the woodland.

It’s a steep slope. Looking after this wood would be hard work. I wonder what commercial potential it has, and whether the farmer will decide to buy it in the end.

It begins raining steadily. I put my head down and trudge along. Then, the weather clears a little, and I pull out my camera again. See that house down by the shore? What a lovely spot to live. I wonder if it’s permanently occupied, or is it a holiday let?

One of the things I’ve had to get used to in Scotland is the amount of road walking you have to do. Footpaths are relatively rare. But this road is quiet and beautiful, and it snakes onwards, keeping to high ground.

After two or three miles, the road drops down towards the shore again, and I reach the turnoff to Strome Castle.

According to my map, this area consists of three hamlets. Stromemore, North Strome and Mid Strome. But they’re all ‘nothing’ places, with only the occasional farm house or cottage to be seen, and perhaps are just remnants of old villages. I’m turning off to take a look at Strome Castle, which, in comparison, turns out to be a bustling place.

I pass new excavations in the slope at the side of the road. Are they planning new building here? Or just levelling off the land?

Further along, and there are more cottages and houses. And there’s the castle off to my right.

I walk straight past the castle, as I want to see the jetty at the end of the road. This is where the ferry used to run, crossing over Loch Carron, to the village called Strome Ferry on the opposite bank.

Two fishermen (husband and wife, I think) are standing on the jetty with their dog. I watch them set up their lines, and I remember standing on the road at Strome Ferry a few weeks ago, and looking across to this side of the loch. Now I’m over here, looking back at where I once stood. 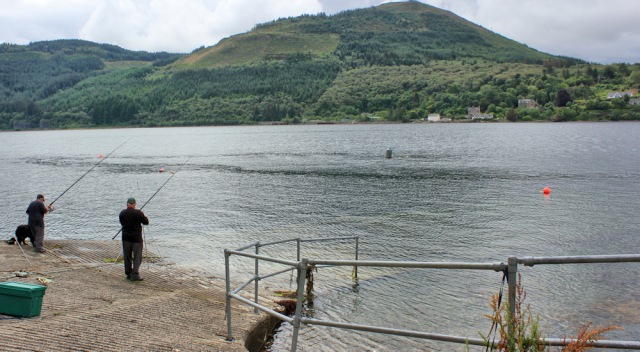 A minibus has pulled up beside the jetty. It’s an organised tour of some sort, and a group of people – adults and children – begin struggling into wet suits. An instructor helps them put on oxygen tanks and supervises as they adjust their scuba gear.

One by one, they jump into the water. Some are more reluctant than others. I must say the water seems murky today, and not particularly inviting.

Despite the commotion going on around them, the fishermen manage to catch a fish. Their dog looks on. I wonder if it’s edible? 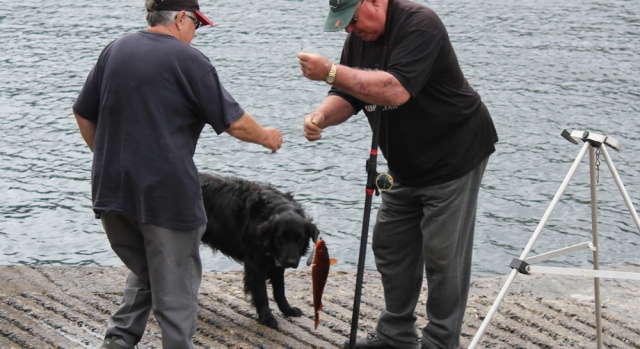 Finally, all the scuba divers are in the water. The youngsters are shrieking because the water is cold. Just wait, one of the mothers tells them, it will warm up.

It’s entertaining to watch them, but time to get on with my walk. I have a brief chat with the fishers, and then leave them in peace.

Back down the road, and I turn off to look at the castle. Unfortunately, it’s in a state of disrepair. 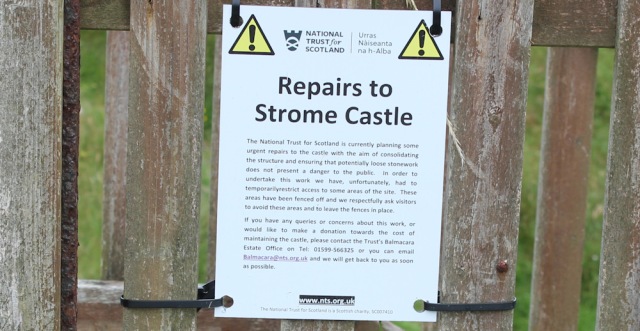 I follow the narrow path along the slope. Beautiful spot.

The ruins are marred by fencing, although quite why they bother, I don’t know, as the obstructions are flimsy…

… and I squeeze past the edge of a fence in order to peer through the arch. It frames a great view. Pity the weather is gloomy. That’s the mouth of Loch Carron down there, Plockton in the distance, and the mountains behind belong to Skye.

Funny how I’ve walked for days, and have actually travelled such a short distance really.

Below the castle is a pretty little bay. It’s name is, of course, Castle Bay. Across the loch is Strome Ferry, and I remember spending a couple of nights in my campervan in the car park at the top of the hill. 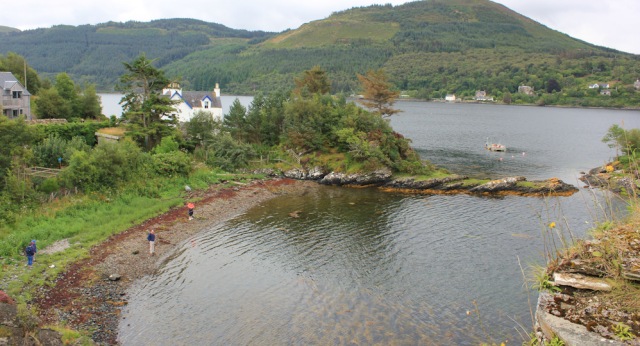 I’ve been to some wonderful places on my Scottish adventure. Everywhere you turn is a stunning view.

Rain is threatening again. I shrug off my rucksack. Time for a quick lunch, and I can perch my camera on a handy piece of castle wall and snap a self portrait too.

My lunch is cut short by the rain. Oh well. Onwards.

Post walk note: Apologies, but this walk is the wrong way round. Following my rules, I should have driven from Lochcarron to the end of the walk at Ardaneaskan, left my bike there, driven back to the beginning, walked to the end, and cycled back to the beginning again. (Hope you see what I mean.) But I did it the other way round, partly because I prefer to get the cycling over at the beginning of the day, but mainly because I could  avoid ‘breaking camp’ and avoid packing up the van unnecessarily.

I did, of course, agonise over this decision for much of the evening the night before!

22 Responses to 422am Ardaneaskan to Lochcarron