It’s raining by the time I pack up my lunch and leave Strome Castle. I walk back to the T junction, and turn right towards Lochcarron. It’s not wet enough to pull on my waterproofs. Put my head down. March through the drizzle.

Some time later, I see familiar ring shapes on the loch. It’s another fish farm. A nearby sign tells me this belongs to the Scottish Salmon Company.

Fish and tourism makes up the main industry around here. Timber too, I guess. I haven’t come across a distillery for some time.

I am nervous about driving my van (aka The Beast) along this narrow road tomorrow, which I will need to do to pick up my Scooty bike. The sight of a large motorhome ahead, trying to manoeuvre into a small passing space, doesn’t fill me with much confidence.

The rain eases again. I’m passing more cottages now. Here’s a cheerful little place, which I think might be a café… but my hopes are dashed when I realise it’s a weaving shop.

Onwards. Over a little river…

… and then over another cattle grid – although I haven’t seen any cattle, so maybe it’s a deer grid – and now I must be approaching the outskirts of Lochcarron. There are more cottages scattered about, the road is lined by street lights, and there are speed restrictions.

Can’t resist stopping beside one of those roadside mirrors. Time for another self portrait.

A sign tells me I’m in Port na Criche. Takes me some time to locate the name on my map, where it’s spelt Portnacrich in small letters. I walk past a row of larger houses, and then past a collection of neat bungalows.

Ahead I can see more houses. Lochcarron. Rain clouds roll over the hills behind the village, but luckily no rain is falling down here .

To my right is a pretty little peninsula, jutting out into Loch Carron. Check my map. Slumbay Island. Probably a tidal island once, but now it looks firmly attached to the mainland.

Out in the loch are some moored yachts, and behind the boats is a strange shape. Crikey. A submarine?!

No, silly me, it’s only an island – Sgeir Chreagach, according to my map – but it does look a little like a submarine when your glasses are fogged up after the rain. 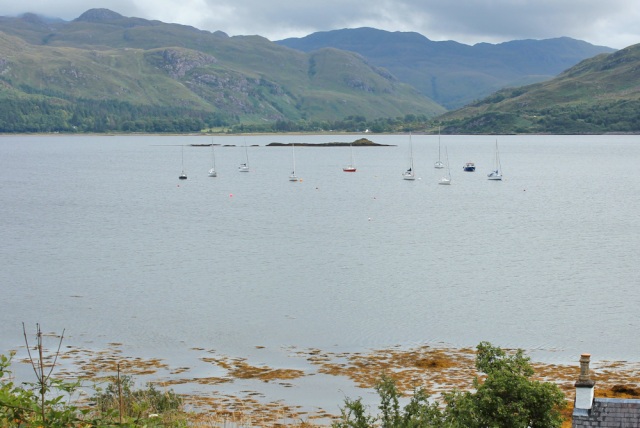 I remember spotting a rock that looked remarkably like a submarine when I was walking down the Mull of Kintyre. Turned out, it really was a submarine. Not this time.

There is Lochcarron ahead. It’s a very pretty village, and in a lovely setting. Lochcarron is looking beautiful today.

I seem to have spent most of the last few years of my coastal walk making my way up and down the shores of Scottish lochs. Every loch has it’s own characteristics, and it is hard to say which one I’ve enjoyed the most.

Loch Sunart was stunning, and had sea otters. Loch Moran was eerie and mysterious, and had its own monster. But my favourite so far has been Loch Hourn, with a wildness that was both soul-lifting and terrifying.

Anyway, I’ve enjoyed walking along the shores of Loch Carron. It’s taken me four days of hiking to get round the loch, but this part of my journey is nearly over.

A large white bungalow catches my eye. Turn’s out it is not an ordinary residence, but Lochcarron’s Free Church of Scotland. What a nice place to have a church.

I reach the T junction. Here my minor road joins the A896, part of the famous N500 touring route. This means the road is busier than you would expect.

I turn right, and head into Lochcarron. On the corner is an odd football field. I noticed it earlier when I cycled past on Scooty – odd because the goalposts seem wrong. I’m not a football fan, but the shape of the goals are unusual… I take a closer look.

Turns out the field belongs to Lochcarron Shinty Club. Shinty is roughly the Scottish equivalent of hockey, but is far more dangerous and involves a lot more physical contact. I would love to watch a real game.

Onwards. Someone has put up a homemade speed sign. It’s a reminder that the N500 has been both a blessing and a curse to the northern highlands. 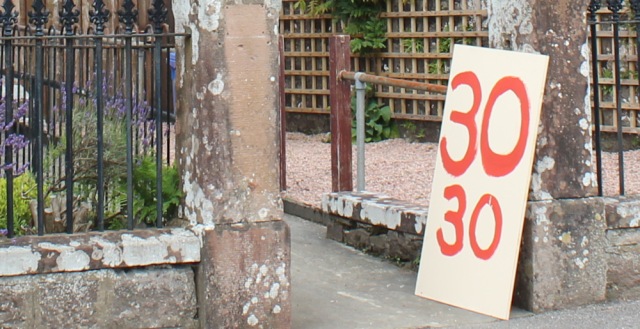 The route is a blessing because it brings in the tourists, and a curse because of the dangers that come with increased traffic.

Lochcarron is a reasonably-sized village, compared to the average English village, but in this part of the world it seems like a full blown town. It even has its own police station…

This is Lochcarron’s main street. So pretty. Only marred by the number of vehicles that park along here.

I walk past the Waterside café. It seems busy, but then I notice the group of bikers outside are packing up ready to leave.

I wait for them to leave on their bikes, and then pop into the café. Luckily, there is somewhere to sit inside, and I find a cosy corner and order a hot meal. After my rushed picnic lunch, eaten in the rain, it is nice to have somewhere dry to sit down. And a good meal now means I can just have a snack later in the van, and won’t have to go out to find food.

( I find eating in the evening is a trying experience when you’re on your own. You don’t really want a full-blown restaurant meal, but most cafes are closed in the evening, and many local pubs are now restaurants in all but name.)

An hour later, I leave the café, feeling nicely full.

Lochcarron really does have everything you need in a Scottish village, including a self-service fuel pump, a cash machine, and a Spar supermarket.

Further along, I pass the village hall, which is selling sports and outdoor clothing. It’s tempting to pop in, but I really have enough walking gear and don’t need any more.

Perched high beside the road is a war memorial.

Close to the memorial, I find a little path that takes me off the road and up the slope, where it will join a much narrower and quieter street, called Croft Road. On the way up, I turn to take photos of the view across Loch Carron.

The Wee Camp Site is situated on Croft Road. It really is ‘wee’, with a limited number of pitches on a stepped site. The facilities are pretty basic, but it’s perfect for small campervans, and takes tents too.

There’s my lovely Beast, parked in one of the best spots, with a great view across Loch Carron.

It’s been another short walk today. In fact, I’ve been frustrated about my distances recently, but when you have to cycle as well as walk – and despite having an electric bike – you really don’t want to go too far. Partly because of the effort involved, and partly the fear of having a puncture, or running out of electric charge, or some other mechanical failure with the bike.

Anyway, no problems today. It’s been a great walk.

You can learn more about Shinty on Wikipedia.

18 Responses to 422pm Ardaneaskan to Lochcarron