Posted on September 14, 2020 by Ruth Livingstone

The road twists, turns, and dips up and down. It’s very pretty really but, after the excitement of the ‘proper path’ this morning, the rest of today’s walk seems a bit of a slog.

Finally, the road runs close to the water. Loch Shieldaig. There are sheep grazing on the seaweed along the shore. I wonder if their meat tastes salty? Or is full of iodine?

Out in the loch is the obligatory fish farm. Salmon, I suppose. 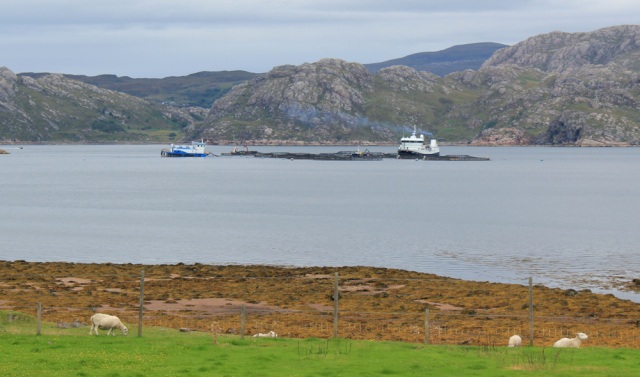 I’ve reached a place called Inverbain, where there is an information sign and a little hydroelectric station, and… well, nothing much else.

The information sign tells me the Inverbain Hydroelectric Scheme supplies electricity to 900 households. That is probably the total population of North Appleby, with some left over.

A bevy of cyclists pass me – all clad in Lycra with incredibly muscular calves, and carrying rucksacks on their backs.

They’re free-wheeling down the hill at the moment, but there will have been plenty of steep slopes to challenge them. Must be very fit.

I remember how I rode my Scooty bike up here this morning, grateful for the battery-assisted power, and hoping I would make it up the hills without stopping. I did make it and, in fact, my trusty ebike has turned out to be one of my best purchases. I’m grateful to those fellow coastal-walkers who suggested it.

The road rises up again, running above the loch. I look down over a sheltered bay and a group of little islands – Eilean Dughaill, with Shieldaig Island beyond. The houses in the distance must be Shieldaig. 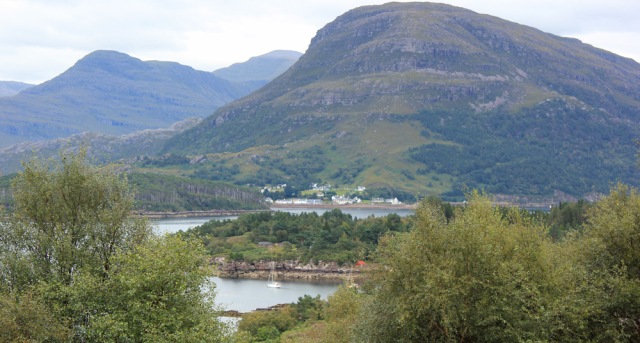 In fact, there are two Shieldaigs in this area of Scotland. This is the largest one, and the first one I’ve come to.

The road is quiet this morning. More cyclists overtake me – speeding round the corners and making the most of the downhill slope.

Round a corner, and a few sheep meander across the tarmac. Hope the cyclists managed to avoid them.

Owards. Through the trees. I do love this road.

Through gaps in the trees, I can glimpses over the loch. Shieldaig still seems far away, but I must be getting closer. Looks quite a big place.

I cross over a cattle grid. Or is it a sheep grid? Or a deer grid?

Yes, I’m definitely getting closer to Shieldaig. Look at those mountains behind it. Wow. Scotland just gets wilder and wilder.

More cyclists. Quite a lot of traffic this afternoon!

The road is going downwards now, and more houses appear among the greenery. I definitely get the feeling I’m leaving the wilderness of Applecross behind, and entering a more built-up area.

Ah, look at that house below the road. It’s a new build. nestled in a little river valley, with views over the loch. Love the balconies and the octagonal shape of the living room. Oh, what a wonderful view they must have.

The road dips down into the valley, and crosses over the river.

Below is a mucky looking pool. Its surface is covered in scum and weeds, which have been corralled into circular shapes, like a frozen ripple effect.

I wonder if it’s part of another hydroelectric scheme? Seems to be still under construction.

Spot a engraved plaque in a large stone, and stop for a closer look.

The stone commemorates the opening of the road from Shieldaig to Kenmore, which was opened in 1970 by Princess Margaret. How amazing to think this road only went a few miles along the coast, leaving the rest of Applecross cut off. (I remember the other plaque in Applecross Bay, which I saw a few days ago, and which commemorated the opening of the second part of the road in 1976.)

Beyond the stone is a flat open area, where a group of bikers seem to be erecting a  camping site.

Are they setting up for the night? Hope they’ve got nets and insect repellent. There will be plenty of midges to keep them company!

A few yard farther, and I reach the main road. Only a mile to Shieldaig.. but only 13 miles back to Lochcarron!

It seems a long time since I left the lovely Wee Campsite on the slope above Lochcarron. Just over a week ago, in fact. Crikey! As usual, I’ve taken a very long time to cover very little real distance!

I turn left and head down the road towards Shieldaig. It might be a ‘main road’ – the A896 – but it’s still narrow and single-track in some parts.

The increased traffic is a nuisance. I have to keep stopping to let cars go by.

The loch is just to my left, behind a screen of trees. I notice a sign pinned to one of the trunks – “Red Squirrel Reintroduction Zone.” Ah, how lovely.

Now, I keep stopping to look for red squirrels, but don’t see any. They are far more timid than the grey variety,  and hard to spot.

The road winds close to the shore. Rocky cliffs on my right. Water on my left.

There’s Shieldaig, just a few more corners to go, and I should be there. The rocky island, covered in trees, is Shieldaig Island, which is apparently now home to several breeding pairs of sea eagles.

I keep looking up in the trees for squirrels, and up in the sky for sea eagles, but don’t spot either. Because I’m continually looking up, I nearly miss seeing the ripples in the water… oh, a seal?

I swing up my camera, but only manage a few blurry shots of a head that might be a seal, but was most definitely an otter. You will just have to believe me.

I’ve reached the turnoff to Shieldaig.

When I parked my lovely Beast in this little layby earlier, it was empty. Now there are several cars and vans here, with groups of tourists taking photos.

I walk through Shieldaig. The tourist information boasts that Shieldaig is a place to spot wildlife. Not with all this bustle going on! It’s a pretty place, but seems positively crowded compared to the northern part of the Applecross peninsula.

When I’m walking alone, I often yearn for company. But, I always find it an uncomfortable shock to step from isolation into the middle of groups of people. I head back to the safety of the Beast.

16 Responses to 430pm Ardheslaig to Shieldaig