The tide is high and Instow looks lovely surrounded by water, instead of mud, despite the dull weather. I have a long walk ahead, aiming to get beyond Barnstaple today.

Across the water I can see Appledore, where I walked yesterday. 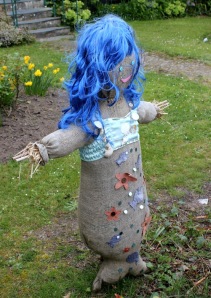 I head along the waterfront, looking for a toilet, and I spot this lovely mermaid. What she is doing here, and whether she is a one-off or part of a series, isn’t clear. Anyway, she makes me smile.

Afterwards, when I look at the photograph, I realise she is probably a scarecrow. If she is, then she is possibly the prettiest scarecrow I’ve ever seen.

Instow is one of those in-between villages. Not really a proper village. Not really a seaside resort. It does have a couple of restaurants and I decide to return here at some point for a meal with my husband and his mother.

I walk along the beach with only a few distant dog-walkers for company.

There are warning MOD signs.

But the strange, flag-flying structure, which from a distance I thought was some sort of military check point, turns out to be a village cricket pitch.

Beyond the cricket pitch is another long stretch of beach. In the distance are some jetties. The beach is looking rather muddy as the tide recedes and I am reminded that this is estuary rather than sea-side. I may have come to the mouth of the River Torridge, but I am about to walk up another river – the River Taw – towards Barnstaple.

Parked against the first jetty is a large ship. At first I think it is waiting for the next incoming tide, but as I get nearer I realise it is just an abandoned wreck.

This is only one of several junked ships I come across (and I saw others yesterday), but this is the largest one so far. 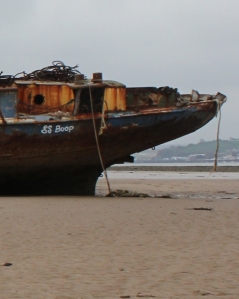 I do love old wrecks. In my younger days, I would have scrambled up and into this one. But I am no longer capable of climbing up the handy rope. Instead I just walk around the hull several times and take photos. The colour effect caused by the leaching rust is dramatic.

Somebody has given the boat a name.

I continue onwards, walking under the jetty and finding another wreck on the other side, although the second one is still afloat.

Onwards, around the corner and I continue down the beach.  I’m not normally nervous about walking on my own, but the abandoned wrecks have made me aware of the apparent isolation of the area. Instow is no longer visible, hidden on the other side of the jetty.

There is only one lone dog-walker ahead of me and I hang back and wait to put some distance between us. I take more photos and when I look again, he has gone.

When I reach the second jetty, it too appears abandoned, although I wonder if it might be used occasionally.  There is a yard surrounded by high fences and, although most of the lot is deserted and empty, I see a pile of timber near to the perimeter fence. There is nobody about.

Somebody has made a half-hearted attempt to screen the yard from the path by planting trees. They look a little forlorn. Why here? Why just this short row?

I am on the official South West Coast Path but don’t meet anybody during this entire stretch. Just inland is the Tarka Trail, which is both a walking and a cycling track – and I can tell from my map that this provides an alternative route for the SWCP. Is that where all the people are? 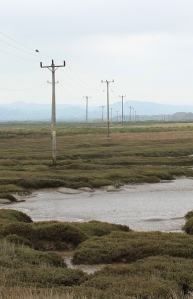 According to my map, I am walking around the Instow Barton Marsh and later this becomes the East Yelland Marsh. The water’s edge is a mix of mud, shingle and grasses. A sign tells me it is a “Wildlife Refuge” – although I see no sign of any life, wild or otherwise.

Inland there are wet areas and clumps of grass. And a marching army of poles.

After some time, the footpath rejoins the Tarka Trail. This must follow the route of an old railway. Long and flat, tarmac and cyclists. I don’t meet any other walkers.

This section looks easy but I find it hard going. I remember, now, why I never went walking when we lived in the Lincolnshire Fens. One of the joys of walking is following the twists and turns of a path and coming across unexpected things. When you can see the next two miles ahead, it becomes boring!

I feel even more fed up when I walk past a nature reserve with fences and “No Access”.

But a short distance later, and I realise you can walk through the reserve, as long as you keep to the official paths.

I see the detour involves extra walking, and will simply take me around two sides of a triangle before rejoining the same boring path again. But I decide it’s worth making the deviation to lighten the monotony of the Tarka Trail.

After a tedious trek along a track with no view because of high hedges, I reach the water’s edge. Across the River Taw is Chivenor, my intended destination.

I see a few wading birds in the mud and I hear a skylark singing in the air above my head. A tiny speck. But making such a lovely noise. I try to record the sound on my iPhone, but end up recording wind noises instead.

Onwards. The river bank begins to curve back to join the Tarka Trail.

I am nearing a bridge across a stream called the Fremington Pill. The stench of sewage becomes very strong. I look on my map but can’t see any sign of a sewage works. I wonder if a waste pipe empties directly into the river at this point.

The memorial stone is interesting: John “Dinger” Bell, a fisherman who drowned (here?) at the age of 55. Younger than I am. And a ‘character’.

I am never sure what being a ‘character’ actually means. Everybody I’ve ever met has had a character of some sort. The phrase suggests someone very eccentric, very extrovert or who spends a lot of time in the pub. But I guess I’d rather be remembered as a ‘character’ than forgotten altogether.

On the other side of the bridge is a café and bike hire place. I am tempted to stop for something to eat, but the nearby sewage whiff puts me off. I decide to have lunch in Barnstaple and keep walking.

Apart from the occasional cyclist, the remainder of the trail is a lonely trek along a straight path. The shore is invisible and somewhere to my left, but I enjoy walking among trees for a while. (The stone bridge over the trail is a surprise and I don’t know why it exists, because there is no road marked on my map at this point.)

Beyond the trees the Tarka Trail stretches out. I can see Barnstaple in the distance. I seem to walk a long way without getting any nearer to the town.

Then, suddenly, I’m almost there and walking under the new Taw Bridge, carrying the A361 and creating an effective bypass to the town. On the other side of the bridge I can see a collection of old boats and rusty hulls.

Now I have a choice of paths across a piece of wasteland. I decide to stick close to the shore, and I leave the tarmac of the Tarka Trail for the earthen surface of a track.

At some point, I know my path is going nowhere. I can tell from the gradual deterioration with increasing litter. Signs of rough sleeping. And the abandoned supermarket trolley.

Despite the increasing uneasiness I feel whenever I walk through a desolate semi-urban area, I keep walking. Perhaps there will be a way through.

But I come across a locked gate and warning signs. Private Property. This is infuriating, because I can see the town bridge – called the Long Bridge – is only a hundred yards away. But there is no easy way through the fencing and I have no choice. I turn back.

A long footpath takes me through the industrial area, back to the road and the continuation of the official Tarka Trail. The high fences on either side of the path are slightly intimidating, but I always enjoy walking past derelict plots, strange yards and fading industrial structures. I wonder what happens in such places, what is being manufactured, transported, stored, traded? No clues here.

When I reach the Long Bridge, via the road, I can see the reason for my unnecessary deviation from the shore. It is this old abandoned building and its associated land. What is it? A disused warehouse? Or an old factory?

It’s a shame the local council haven’t insist on the creation of a proper riverside walk here. And the whole site is an eyesore. It doesn’t create a great impression of Barnstaple on this important approach road.

Barnstaple doesn’t look like a great tourist centre (although it’s hard to tell, off-season in April), but it does seem to be a proper town. The north bank is much more attractive than the south. I like it.

I have lunch at The Water Gate, a Wetherspoon’s pub, overlooking the river. I try to avoid big chains, either as eating or drinking places, but the great thing about Wetherspoon’s is that they serve food all day long. Lunch at 3:30pm? No problem.

I found this interesting news article about the derelict buildings in the North Devon Journal. Written in 2008!

Update on the meal at Instow: I do return with my husband and his mother for a meal. But I’m disappointed. The restaurant is noisy with several large parties, and the view over the river obscured by a row of diners. Packed seats and low ceilings make the room feel claustrophobic and amplify the sound. Conversation is difficult. The meal is overpriced and my dish of fish with pasta turns out to be a huge bowl of spaghetti Bolognese with the fish perched on top. Difficult to eat the fish, which sinks deeper into the pasta every time I try to grab a bit with my fork. The delicate flesh is overpowered by the rich sauce. The whole combination is poorly thought out and- well, just sort of weird.

The rest of the walk continues in the next blog post…

7 Responses to 141(am) Instow, Barnstaple, Chivenor